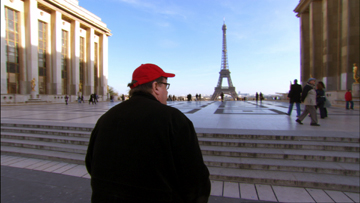 Turning his glasses on America’s healthcare system, he’s still pointing accusatory fingers, but here he does it much more out of sorrow than anger. It’s a smart move — Bowling for Columbine and Fahrenheit 9/11 made his shtick familiar to millions of moviegoers, and this master of political theater must have figured out that he needed a new one. Mission accomplished, as one of Moore’s old nemeses would say. The movie begins as you might expect, with a litany of horror stories from Americans (insured and uninsured alike) who’ve fallen through the cracks of our healthcare system, letting chronic conditions go untreated, losing limbs, and occasionally dying because someone in an office somewhere denies them care. Disgruntled former healthcare workers detail exactly how they used to screw people over. Typically, Moore leaves no cheap point unscored, devoting a sequence to an African-American woman from South Central L.A. whose 18-month-old daughter died because her HMO wouldn’t pay to treat the little girl’s throat infection. Moore does not sit down with the industry’s defenders, and though it would’ve been fun watching him confront suit-wearing villains, leaving them out tones down the movie’s rhetoric and makes the “guilty” parties appear to be hiding behind their desks.

It’s irresponsible journalism, but it’s effective filmmaking. Oh, and former Congressman-turned-drug company lobbyist Billy Tauzin comes across like a sanctimonious whore. On the face of it, Sicko might seem less controversial than other Moore efforts. No American at any point on the political spectrum believes that our healthcare system is as good as it could possibly be, and Moore takes only a few jabs at President Bush. He even names Hillary Clinton as an unlikely bad guy, noting that the senator from New York who once tried to reform the industry is now one of its biggest lapdogs. Yet for all that, this is not a film that conservatives will love. Moore sees an easy fix for our ills, which is for the United States to adopt the state-run model used in Canada, Britain, and France. He visits these countries and relates glowing stories of foreign citizens and American expats who found a welcome safety net after becoming sick or injured. The filmmaker disingenuously plays the fool for people on the street, asking Canadians and Brits, “Who pays for your healthcare?” and being laughed at in response. Moore isn’t a convincing stooge anymore and should probably hire Sacha Baron Cohen to play that part for him. More seriously, he ignores the flaws in this model. It takes more than a few shots of English doctors driving luxury cars and French engineers living in million-dollar homes to convince us that state-run medicine doesn’t create a heavy tax burden or a clotted bureaucracy.

Moore even goes so far as to praise the whole French way of life, and, well, don’t get me started on how screwed up that country’s economy is. The filmmaker’s pie-eyed optimism makes him look provincial, and if I were a French taxpayer I probably wouldn’t be too pleased with the cancer patient who spent three months recovering at a Mediterranean resort on my euro. A socialized system is open to freeloaders, and yet I can’t help but think that a certain amount of abuse would still be preferable to what we have now, especially after seeing a USC research hospital dump patients at homeless shelters when they can’t pay their bills. If that doesn’t make the case for nationalized healthcare, the radical former British Labour MP Tony Benn makes a forceful argument for it when Moore interviews him. While Moore’s sense of humor (which makes his political points more digestible) positively ran amok in Bowling for Columbine, he tends more toward dry understatement here; a montage of news clips about the medical care for the prisoners at Guantánamo Bay inspires his voiceover, “Wow, so there actually is one place on U.S. soil with free universal healthcare.”

That leads to Moore’s trip to Cuba with three 9/11 rescue workers and a bunch of other Americans who’ve been denied healthcare, where they get all the tests they need and some expensive drugs for pennies. Are they receiving special treatment from a dictator who wants to embarrass the U.S.? My instinct says Moore’s too savvy to be played this way, but I wish he’d given more evidence that they got the same treatment as ordinary Cubans. The trip does produce a genuinely moving moment when the rescue workers visit a firehouse and find the Cuban firefighters standing at attention in their honor. Sure, it’s possible that Comrade Fidel or some flunky called them up and told them to do it, but the emotion behind their tribute feels real. This movie needs to be seen side by side with an excellent Romanian film from last year called The Death of Mr. Lazarescu. Cristi Puiu’s blood-freezing drama depicts a broken, run-down, overworked system, and shows that state-run medicine can be so much more horrible than what we have now. Yet Sicko has its uses too, shining a light on our system’s shortcomings and making a powerful case that we can and must do better. What’s more American than that idea?