Bands that produce, engineer, mix, and master their own albums run the gamut from cream to crap, and Lost Country is consistently among the creamiest. Scattered, their sixth album, is almost as good as 2005’s Long Gone Thrill, which was a gem. 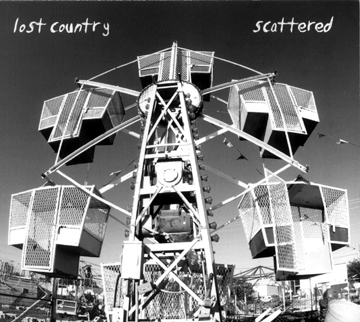 Like many Americana bands — the good ones, at least — they’re tough to pin down. They jump from country to rock to blues to folk, channeling Bob Dylan here, Neil Young there, The Band, Gram Parsons, Emmylou Harris, and any number of influences. While their sound might dance with the derivative, it maintains a welcome freshness and exuberance. Several band members contribute to the songwriting process and share lead vocal responsibilities, providing a wide-ranging sound. Frontman Jim Colegrove’s “I Ain’t Going Back to New Orleans” ranks among the top post-Katrina songs trotted out by various artists and sounds as if it could have fit perfectly on the O Brother, Where Art Thou soundtrack. His “Your Number’s Up” is an enjoyably rowdy rocker, while the title song is killer country, resonating with that early-1970s Southern California sound practiced by artists such as The Flying Burrito Brothers. The Joe Hutchinson-penned “Let the Guitar Howl” is as catchy as they come, and keyboardist Jeff Gutcheon’s “I Hate Myself” is self-analysis put to music, with some chuckles to boot. It was nice to hear the band resurrect Floyd Tillman’s “This Cold War With You,” even though it’s out of place among all the originals.

While there’s plenty to love, the album isn’t flawless. Susan Colegrove’s harmony vocals are tasty, but her lead vocals — um, not so much. It doesn’t help that she’s saddled with the cheesiest songs. “I Gotta Dance” probably sounds OK in concert but doesn’t work in the studio, and “Love Was in Your Kiss” might as well have been titled “Quick, Push the Fast-Forward Button Before Your Ears Hemorrhage.” Overall, though, this outfit is something special. They don’t exhaust themselves on the club scene, but you can sometimes find them playing for little or no cover charge at clubs such as MacHenry’s or Fred’s Texas Café.-Jeff Prince