Home Film Film Reviews Three Up, Three Down
SHARE
Facebook
Twitter
Surely no one will be surprised to learn that there’s nothing in Rush Hour 3 that can’t be found in either of the first two movies. 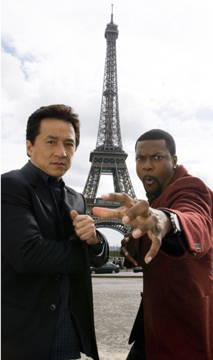 The third installment reunites the two stars and director from the previous films, and though they’re all running loose in Paris this time, the plot is the same, so much so that it rips off the first movie regarding the chief villain’s secret identity. Yet even though the movie itself is dull, I found it unexpectedly thought-provoking as a review subject. In the spirit of the now-defunct Fametracker.com, let’s conduct a fame audit on the three guys who found new stardom with this series nine years ago and where they are now. Chris Tucker: Seriously, what the hell? When Rush Hour came out, he was a promising stand-up who had done memorable supporting turns in Friday and The Fifth Element. He shared a motor mouth, high-pitched voice, and first name with the similarly up-and-coming Chris Rock, but where Rock was all superego, Tucker was all id. Live as the proverbial wire, he was an electrifying screen presence.

The trouble is, since 1998 he hasn’t appeared in any movies except the Rush Hour films. He hasn’t sat on his ass the entire time; a number of announced projects have fallen through, and he has been an outspoken activist for eradicating African poverty. Really, though, would it have killed him to take two weeks and play a supporting role for a big cheese like Quentin Tarantino? (He actually did this back in 1997’s Jackie Brown.) If nothing else, the work would have kept his skills sharp. Rush Hour 3 requires him to slog through seemingly never-ending and unfunny bits, one involving a couple of Chinese guys named Yu and Mi. Ripping off Abbott and Costello is a bad sign, but it’s nowhere near as unattractive as his character’s homosexual panic when he mistakenly gets the impression that a woman he went to bed with might have been a man. All this makes Tucker look as played out as Steve Martin or Robin Williams, only without having ever starred in a truly great comedy. He has gone from raw to over-the-hill without a discernible prime. It’s sad, wasteful, and puzzling.

Jackie Chan: His decline is easier to understand, at least. He’s 53 years old, and while time is often cruel to action-movie stars, it’s cruelest of all to martial-arts performers. Chan proved in Rush Hour that a Hong Kong star could win over American audiences, but more than that, he helped put a human face on the martial-arts genre. While everyone else tried to imitate Bruce Lee’s aura of invincibility, he was willing to grimace and wave his hand around in pain after punching someone. That vulnerability, usually expressed in comic terms, made him a star. That said, the guy looks tired. His last few movies have flopped (Around the World in 80 Days, The Medallion, The Tuxedo), and Stephen Chow has usurped his place as kung fu cinema’s clown prince. He’s noticeably slower in the fight sequences here, and he repeats himself — the bit where he rolls around on the floor and uses a chair to fight off assailants is a rehash of similar scenes from at least two earlier films. In the climactic swordfight with the big baddie (Hiroyuki Sanada), his 46-year-old Japanese co-star is the one who looks considerably sprier. Chan’s teddy-bear personality makes it easy to imagine him gracefully retiring as an action star and turning into a likable comedic supporting actor. The thing is, he comes from a film culture where stars of his magnitude don’t really do that. If he can’t find a new act, he should walk away. After such a magnificent career, martial-arts fans would surely shower him with deserved applause.

Brett Ratner: Back in 1998, who’d have thought that he’d have a more viable career in 2007 than either Chan or Tucker? He did take over the X-Men franchise without doing too much damage, and he generates Rush Hour 3’s one genuinely funny scene when Chan and Tucker sing the Roberta Flack/Donny Hathaway duet “The Closer I Get to You” for the benefit of a bunch of bad guys at a Parisian nightclub. Ratner is stealing from Moulin Rouge, and what makes the gag work is the unexpectedness of this director stealing from that movie. A hack is a hack, though — even Ratner’s best work has been sloppy, derivative, and emotionally crude, and this movie finds him far from his best. In a scant 90-minute running time, the director still steers this movie into about a dozen dead spots. He’s going through the motions in editing the action sequences, and even though he rounds up a number of fine Gallic actors to fill the supporting roles (Yvan Attal, Julie Depardieu, Noémie Lenoir, … Roman Polanski?!), they’re wasted here. After some modest recent improvement, Ratner looks to have regressed in this misguided attempt to recapture the magic of old.