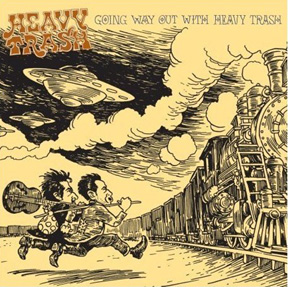 The guys seem to be consistently pissed off about one thing or another, while the sound is gripping enough to make shadows dance under the halogen light’s glare at an empty street corner. The New Yorkers’ collection could be called a northern version of Southern rockabilly. Perhaps a better deDELETEion, though, is rockabilly for the new rage, a headlong rush that veers from its roots path and crashes at the bloody crossroads where garage and rock meet. The terrain is home turf for both guys. Lead vocalist Spencer earned his bloodshot eyes in the John Spencer Blues Explosion, and lead guitarist Verta-Ray cut his teeth in Madder Rose and Speedball Baby.

Recording in Boston with The Sadies, in London with “some Danish guys,” and in New York with some regulars, Heavy Trash churns out bits of Johnny Cash, Waylon Jennings, Link Wray, Charlie Feathers, The Cramps, The Gories, The Cheater Slicks, and Doo Rag, all filtered through beatnik attitude and, in at least one instance, Kurt Vonnegut. There’s also “Crying Tramp,” which Spencer describes in the liner notes as a “post-nuclear cowboy lament,” and the brilliant, Tom Waits-ian “You Can’t Win,” which he calls a political riff — inspired by “post 9/11 paranoia,” Greil Marcus’ The Shape of Things to Come, and Jack Black’s You Can’t Win — about “the bankruptcy of rock ’n’ roll.” That’s Jack Black, the early-20th-century hobo and self-labeled “honorable outlaw” who influenced William S. Burroughs and a lot of other beats, not the actor. Not counting “You Can’t Win,” there’s a little more show than soul in this collection, which is OK — it’s fun to watch the shadows dance. -Tom Geddie