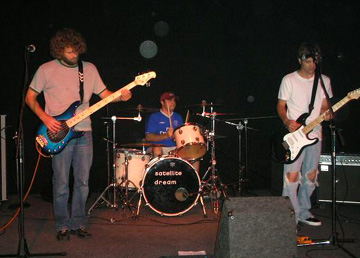 The band’s most recent effort, Smashing Clouds, probably won’t change that. The EP has potential, manifest in all of the sloppy grit and gusto that made grunge such a popular phase. But the Satellite boys are not Pearl Jam/Nirvana/ Soundgarden clones. With echoes of Urge Overkill, Matthew Sweet, and other, more melodic rockers and semi-punks, Clouds proves that the Dream is much more interested in hewing to a vision than angling for commercial-radio airplay.

The opening cut is called “Electric Dawn,” and it sounds exactly like that: As a flat, distorted rhythm tumbles forward, guitars jangle and the two lead singers’ shaky voices struggle, in vain, to free themselves from the impasto. Some interesting, contrapuntual backing vocals, however, add a subtle layer of underground adventurousness to what is otherwise some famous, successful indie band’s B-side. The following cut, with its whimsical, needle-thin, Modest Mouse-esque guitar line, is a left turn but one that leads only to another jolt, a brooding and introspective rough mix with echoes of Candlebox. All of this isn’t to say that there aren’t some dirty, sludgy moments — ‘cause there are — but as both a valentine to and rejection of grunge, Smashing Clouds is true to Satellite Dream’s dream.-Joshua Loewen