My philosophy on tribute albums: When covering popular songs, a band should make its own artistic statement rather than mimicking the original. 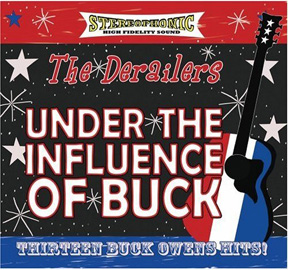 It pisses me off when bands remake songs that sound almost exactly like the originals. What’s the point? Nine times out of 10, I’d rather hear the original. Having said all that, what a surprise it was when I listened to two new albums paying homage to the late, great Buck Owens and found myself preferring the one that plays it straight. Owens’ pioneering “Bakersfield sound” of the 1960s influenced many artists, most notably Dwight Yoakam, whose just-released Dwight Sings Buck is ruined by his annoying, hiccupping vocals and fumbling steps at reinterpreting some of Owens’ best songs. The Derailers fare better with Under the Influence, taking classic hits such as “Tiger by the Tail” and “Together Again” and affectionately serving them up with little deviation.

Owens, a native of Sherman, Texas, developed a distinctive singing style, wrote catchy and often funny songs, and fused country music with early rock ‘n’ roll to shape a jangling, stripped-down sound that shunned the countrypolitan slickness favored by Nashville at the time. Eventually, Owens became a joke to a younger generation who knew him as the stilted host of the lame Hee Haw, strumming his patriotic red-white-and-blue guitar and cracking bad jokes. But anyone with a sense of history appreciates the vast impact Owens had on country music. The Derailers have championed him since their debut in the mid-1990s, and their latest album is an obvious labor of love. Most of the monster hits are here, although the band reaches deep into the Buck-aroos discography to pluck the lesser known “Down on the Corner of Love” and “Who’s Gonna Mow Your Grass?” My biggest complaint is the album omits “Made in Japan,” but Owens had so many hits it would be impossible to include them all without releasing a box set.Forget the Yoakam album and grab this one instead. Better yet, go catch The Derailers in concert, where they really shine.- Jeff Prince