The two neighborhood activists were worried that high-speed truck traffic and spilled sand from a gas well were creating dangerous conditions along East First Street, between the Trinity River bottoms and Oakland Boulevard. 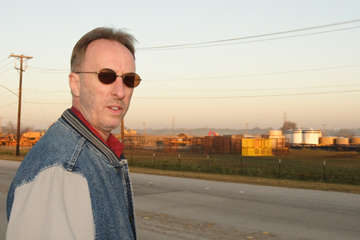 “There were at least three accidents between July and September of this year, where cars just fishtailed off the road,” Mike Phipps, treasurer of the West Meadowbrook Neighborhood Association, said. But when his partner, Ed Sakerka, went down to take pictures of the crashes and road conditions, to show the city that something needed to be done, he found an even bigger problem looming for that Eastside area. “Ed was down there one day talking to someone who worked for Chesapeake, and the guy said ‘If you don’t like the amount of traffic here now, wait ’til all the trucks start coming through when they get the injection well finished.’” Phipps recounted.

It was the first either man had heard of an injection well planned for the Chesapeake drilling site at the old Arc Park softball field north of I-30. And what they found out has made them even more concerned about the price their part of Fort Worth may be paying for what once seemed like “free” Barnett Shale income. Injection wells are the drilling industry’s preferred solution to the major problem of what to do with the millions of gallons of water used by the fracturing or “frac-ing” process required to free up natural gas from the Barnett Shale formation underlying much of North Texas. After the water — infused with sand and chemicals — is forced at high pressure into the shale and the gas is extracted, the leftover water is extremely salty, contaminated with carcinogens and radioactivity from naturally occurring materials, and even flammable because of traces of hydrocarbons.

Drillers say recycling is too expensive, and they generally get rid of it by putting it back into the ground. But the injection sites are rarely on the same property as production wells, so companies wind up hauling the water away in heavy trucks that add even more to the street damage and dangers caused by traffic around well sites. Fort Worth is suspicious of injection wells — so suspicious that they were banned until the city council decided in June 2006 to allow some to be drilled. Two permits were requested almost immediately, one for a shallow injection well on the North Side, which was denied, and one from Dale Energy for its site on East First Street.  The Dale request was for a deep injection well that would release wastewater into the Ellenberger Sand Formation that begins about 9,000 feet below the surface. That permit was granted and was transferred to Chesapeake Energy when that company bought up many of Dale Energy’s assets. But the council, alarmed at the shallow-well request, put a moratorium until April 2008 on any further permits, to allow safety issues to be studied.

Jim Popp, an investigator who worked with the oil and gas industry for more than 40 years, said local governments are right to be leery of injection wells — that in fact, they should be even more strictly regulated. He told Fort Worth Weekly that the wells and the liquid disposed in them are considerably more dangerous than the public has been told. “You’ve got to understand that the terms ‘wastewater’ and ‘salt water’ are just wrong for what’s really being injected into those wells,” he said. “What you’ve got is a toxic waste dump. Plain and simple, that’s what they are.” Major spills are commonplace, he said, and can poison the air and groundwater. Tanker trucks unloading the contaminated water have blown up, and so have storage tanks at injection well sites, he said.

Even though the East First Street injection well isn’t operating yet, it’s already causing major friction between the city and gas company. Chesapeake wants to truck wastewater there from its leases all over the East Side. City officials say that goes against the logic of the ordinance. “The city’s understanding is that the only waste that can be injected into that well is waste that comes from the wells on that immediate property,” Brian Boerner, director of the city’s Environmental Management Department, said. “We wrote the ordinance to get [wastewater] trucks off the street, not to take waste from other areas and have it trucked in to the well. But Chesapeake’s point of view is that it can take waste from any of their leases and inject it there. Which could mean more truck traffic, not less, and that’s the opposite of what we set out to accomplish.”

A Chesapeake spokesperson told the Fort Worth Star-Telegram that the difference of opinion is merely a “gentlemen’s disagreement.” But privately, the company is telling people that this issue is so important that they may consider suing if the city doesn’t change its stance. Their stake in the debate is obvious: With 190 wells operating in Tarrant County alone and more being drilled daily, a disposal mechanism is critical. A Chesapeake spokeswoman declined to comment on whether the company is considering legal action against the city. David Lunsford, who supervises gas well inspections for the city, said the issue probably will have to be resolved by the city council, but he doesn’t expect it to happen soon. “It could take several months,” he said.

What the council finally decides will have a long-term impact. Gas developers told the council in late summer that they will need at least 15 injection disposal wells within the city limits in the next couple of years to handle all the wastewater that will be generated. For now, the waste is being trucked to commercial disposal wells in Somervell, Wise, and Parker counties. Unlike the East First Street well, which the gas company and the city agree can take waste only from Chesapeake drilling sites, commercial wells take waste from any gas or oil drilling operation that will pay the fee of about a dollar per barrel.
“Some of the wells in Erath are permitted to take 25,000 barrels of waste a day,” Popp said. “That’s great for the operator, but what about the people who live nearby? That’s more than 250 water tanker trucks a day coming and going. In Wise, where I live, the figure is 5,000 barrels a day, but that’s still 50 trucks hauling toxic waste through the neighborhood every day.

Chesapeake’s disposal well, by comparison, is allowed to take 25,000 barrels a day — about equal to the waste from 125 wells, many times more capacity than would be needed by the wells on the East First Street property alone. And while drillers and commercial disposal companies claim that disposal wells are dug so deep and constructed so well that there is virtually no chance of aquifers being contaminated, Popp says that’s hogwash. “When the tanker delivers the waste, it isn’t injected directly into the well,” he said. “It’s transferred from the trucks to a tank and then later injected into the well. And there is a tremendous amount of spillage. Where they want to put a well near my place it’s a little above me, and that spillage is going to roll down like rainwater and pollute my stock tanks and poison the air around here.”

He noted that even if a well is properly constructed and the operator is legitimate, hazards abound. Disposal injection wells have backed up and contaminated drinking water supplies in many places in Texas, he said. In a deadly incident just outside of San Antonio in 2003, two tanker trucks unloading wastewater at an injection site exploded when the running engine of one of them sparked a fire in the gas still mixed with the waste. Three people were killed. Afterward, the Federal Chemical Safety and Hazard Investigation Board classified gas-well wastewater as a flammable material. In several other instances, storage tanks at injection well facilities have exploded when struck by lightning. Part of the problem is that disposal sites, like most other aspects of the oil and gas industry in Texas, are largely self-policing, according to Ramona Nye, a spokesperson for the Texas Railroad Commission, which regulates oil and gas wells.

Boerner, the environmental director, said Fort Worth has addressed the problem of explosions by requiring that all wastewater storage tanks be made from non-sparking material — “fiberglass or materials like it.” However, one of Popp’s associates, who asked that his name not be used because of gas companies’ threats to sue him, scoffed at the notion that fiberglass or even steel tanks with lightning arresters would provide much protection. “We had that storage tank over in Cresson in Johnson County get hit by lightning last March 29, and neighbors said it burned for six hours. And that was fiberglass,” he said. “So somebody pulled the wool over Fort Worth’s eyes if they think they’re protecting the populace with that move. And lightning rods? Well, lightning jumps. And if it jumps to a steel tank, that tank is going to go. That’s just reality.”

Popp and others sympathize with the problems facing Fort Worth and its citizens, but they’re tired of seeing gas-well waste being trucked to their counties from all over North Texas. Popp insists that there are better solutions than disposal wells. “The gas and oil companies can desalinate the water and reuse it. They can separate out the toxic waste and dispose of it responsibly. It will cost them money, but that’s too bad,” he said. “They shouldn’t be allowed to stuff their pockets at the expense of our environment.” Chesapeake envisions a series of underground pipelines that would transfer wastewater directly from their gas wells to their disposal sites. But Texas laws that give oil and gas companies the right to use eminent domain for transmission pipelines have no similar rights for water pipes, much less pipes carrying flammable or otherwise hazardous liquid.

“Chesapeake is working to acquire the right of way for transmission pipelines, and in the leases they’re also asking homeowners and others for the right to lay water lines at the same time,” Boerner said. “But they’ve got some big holes in their plans, so they’re still going to have to use a lot of trucks to get that water where they want it.” “However you look at it, the issue is quality of life,” Phipps said. “And unless we can get those companies and those truck drivers to realize that this is a neighborhood and not a job site, we’re going to remain at odds.”

You can reach Peter Gorman at  peterg9@yahoo.com.