Occult novelist William Blake describes the term “urizen” as the ultimate embodiment of conventional reason and law; a citizen of the universe, if you will. 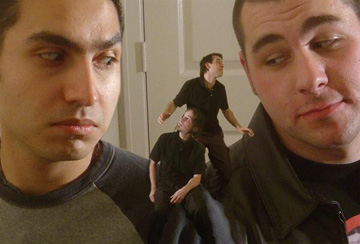 Fort Worth avant-metal band Urizen’s devotion to the concept goes only as far as the reason of melody and the law of tempo. The rest is … out there. Comparisons to Tool and Mudvayne would not be completely out of line – the Cowtown quartet can change tempos seamlessly in mid-stream and foment drama between the bouts of chaos and flights of pristine melody. But the band actually shares more with the likes of Scandanavia’s Dark Tranquility and Finntroll than with any other stateside metallic outfit. Think: death-metal dressed up in an Italian suit.

A while back, incidentally, the local urizens played a bill with Finntroll, and they must have been paying attention – the heroic valor of ‘troll’s symphonic folk-metal is woven throughout Universe, Urizen’s new album. Though fired by blazing guitars, blasting beats, and vocals that are equally Zappa-esque and operatic, Universe is not a total blitzkrieg. “Behind the Vast Window,” for instance, is medieval-baroque and wispy, like early Emerson, Lake, and Palmer. Plus, the elegant, restrained use of a Korg synth is all over the platter, imparting depth and shine that could not have been achieved by additional guitar parts.

And instead of the crotch, Urizen aims for the mind. Almost all of the lyrics are devoted to the virtues of self-empowerment and positivity. Avant-metal and gothic-metal lovers have known all along that to summon the bleak spirit of Edgar Allan Poe, you must imply his presence rather than use clunky, overt references to crows and telltale hearts and declaim it. One way to conjure the ghost of a spooky storyteller is to create an atmosphere that’s as foreboding and ominous as some of his or her darkest words, which Urizen does on Universe.