Fort Worth-born James McMurtry continues to display a wickedly sharp sense of right and wrong on his new Just Us Kids. 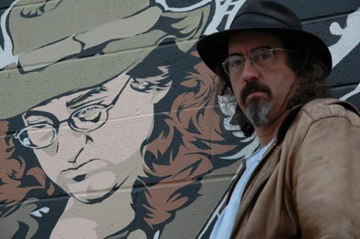 One of the songs, “Cheney’s Toy,” ranks right up there with 2004’s “We Can’t Make It Here” as a defining political song of the past few years. While the older tune dealt mostly with economic hard times, the new one tells the story of a young soldier who “can’t see for the shrapnel in his brain” but is warned to “keep smiling at the camera and keep that twinkle in your eyes.” Then there is the Middle East-situated “God Bless America,” with its three wise men in a corporate SUV that “don’t run on French-fry grease or love and peace.”

Not everything on this rock-oriented album is political, although there’s a populist edge to this poet of plain-language songs about people going downhill and oftentimes staying there. The title song deals with the bewilderment of getting older in changing times, while “Ruby and Carlos” describes the effects of the road and distance on a relationship. In “Hurricane Party” a man who “doesn’t want another drink, just wants that last one again” rides out a hurricane in a bar and ruminates about a life in which “the morning’s first cigarette tastes just as good as it gets all day.”

McMurtry is one of our sharpest writers, and his band’s music – his own guitar leading bass and drums – is augmented in the studio by a couple of other folks. The sound is so solid that, in performance or with the volume turned up, you can almost touch it. The playing is good, the beat is strong, and there aren’t any wasted notes. Raised mostly in Austin, Houston, and Virginia as the son of acclaimed novelist Larry McMurtry, the songwriter walks the line between realism and cynicism, if there’s actually a line there. Just Us Kids continues his streak of well-done, socially conscious records. – Tom Geddie