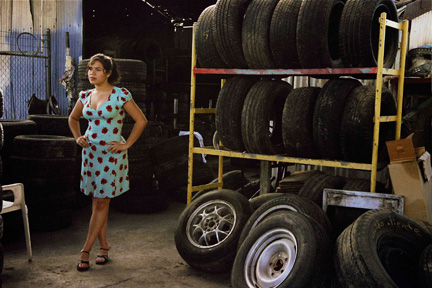 The Dream Begins, Joe Menendez’ Ladrón que roba a ladrón, and Patricia Riggen’s Under the Same Moon brought stories set in Hispanic America to us by consciously imitating Hollywood genres and storytelling models. The wordily titled How the Garcia Girls Spent Their Summer belongs to a different tradition of Latino films that sets out to emulate American independent cinema with slice-of-life realism and unconventional storytelling. Larry Clark’s Wassup Rockers, Richard Glatzer and Wash Westmoreland’s Quinceañera, and Alejandro Gomez Monteverde’s Bella all elevate character over plot and have long stretches where nothing happens. It’s how they capture a mood of disenchantment and alienation or simply the feel of the lives of teen characters with a lot of unstructured time.

America Ferrera made her film debut starring in the best of that latter group, Patricia Cardoso’s Real Women Have Curves. Now she portrays one of the main characters in How the Garcia Girls Spent Their Summer, which played at Sundance back in 2005. In the intervening three years, Ferrera went on to some well-deserved mainstream recognition as the star of the TV show Ugly Betty, which is likely the reason why Garcia Girls is seeing the inside of our theaters right now. The most – and perhaps only – interesting thing here is the impressive assurance with which she holds the screen (even though the movie predates her stardom) as a 17-year-old who’s coming of age in a nowhere town.

The film takes place in the border hamlet of Somerton, Ariz., which happens to be the hometown of writer-director Georgina Garcia Riedel. The Garcia girls in the title are three generations of women living in this wide spot in the middle of a desert road. The oldest, Doña Genoveva (Lucy Gallardo), has just bought a beat-up old truck because she wants to learn how to drive. Her daughter, Lolita (Elizabeth Peña), is a divorced mother who runs the town’s butcher shop by day and spends her nights smoking, drinking, and shedding tears while listening to romantic songs on her stereo. Lolita’s daughter, Blanca (Ferrera), is a high-school student who prefers obsessing about boys to planning her future.

Riedel’s languorous direction is somewhat justified by the dust-blown setting. The slow pace with sparse plotting is apt in a place where there simply isn’t much to do, and there’s a great deal of truth in the bit when Blanca and her three friends, out of sheer boredom, pile into a shopping cart and take turns pushing each other down the sidewalk. The realism of this setting is contrasted hilariously with a fake telenovela within the film that’s full of lush music, cheap special effects, and overheated plotting. (“You slept with my mother! And my sister!”)

We wouldn’t want Garcia Girls to indulge in that kind of soap, but it doesn’t give us enough dramatic developments of its own to chew over during its slow stretches. Each of the Garcia girls is given a separate romantic subplot: Blanca attracts the attention of a boy visiting from out of town (Leo Minaya), Doña Genoveva goes back and forth with the gardener (Jorge Cervera Jr.) who’s giving her driving lessons, and Lolita vacillates between the smooth married man who runs the video store (Steven Bauer) and the chubby, one-handed guy (Rick Najera) who works as her assistant. These plotlines meander without revealing any particularly novel facets of character and without leading anywhere except into a repetitive string of awkward sex scenes. The Garcias, especially Lolita, all fret about the small-town gossip that their flirtations will excite, but nothing comes of that, either. A group of old men function as a Greek chorus here, interrupting the story at various points to reminisce in Spanish about their first cars and the women they drove around in them. Engaging as this is, it doesn’t shed any real light on the story. Riedel’s occasional forays into unorthodox techniques (splitting the screen into three when the Garcias say their confessions in church) are too jarring, and her scenes go on long after they’ve made their point.

Small-scale movies like this one typically don’t end with a dramatic thunderclap but rather a tiny shift in one character’s perspective. How the Garcia Girls Spent Their Summer concludes with two of the Garcias all too neatly ensconced in new love while the other one is left dangling for no apparent reason. Long before that inadequate payoff arrives, you’ll have checked out of this movie that feels as dry and empty as its desert setting. Chalk this up as another Sundance experiment that wilts in the heat of the summer moviegoing season.
How the Garcia Girls Spent Their Summer
Starring America Ferrera, Lucy Gallardo, and Elizabeth Peña. Written and directed by Georgina Garcia Riedel. Rated R.