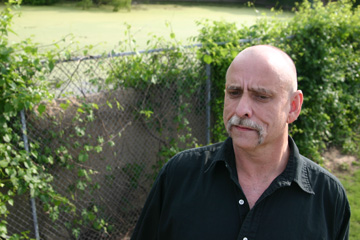 After all, the boggy, mucky mess is part of an abandoned Eastside sewage treatment plant owned by Fort Worth, the same city that for years has told residents to prevent mosquito breeding. “They’re telling us not to leave out tires or anything that will hold water and attract mosquitoes,” Chris Waring said recently, peering over a 10-foot-tall fence that surrounds the slime-filled stagnant water. Fort Worth Weekly’s subsequent inquiries into the plant prompted a vow from city officials to start treating the water for mosquitoes.

The Riverside Wastewater Treatment Plant was built in the 1920s and closed in 1979 on demand of the Environmental Protection Agency, after the updated Village Creek Water Treatment Plant was opened farther east, near the Arlington border. Almost 30 years later, more than a dozen above-ground tanks are still tucked away behind a fence overgrown with vines and bushes, out of sight of the many visitors who come to Gateway Park to play baseball, soccer, and rugby; ride bikes; jog; and hang out. Most of the concrete tanks are tall cylinders containing materials tainted with highly toxic polychlorinated biphenyls, or PCBs, which were used in electrical transformers and components, pesticides, floor products, adhesives, and other products until the practice was banned in the 1970s. Getting rid of that sludge is part of a long-term cleanup project, but for now it has to stay where it is, officials said.

The other kind of tank is that spotted by Waring – flat, rectangular slime pits, about the size of football fields, that hold stagnant water for weeks after a rain. City officials said these tanks, which drain eventually, are not tainted with PCBs and do not pose toxic problems. However, the water can become breeding areas for mosquitoes and foster the West Nile virus. “We are looking at doing treatment of the standing water but not pumping it out,” water department director Mary Guguliuzza said.

Waring was surfing Google Earth’s online satellite imagery recently when he saw aerial shots of the abandoned sewer plant and the tanks. Curious, he went to Gateway Park and wandered around until he found the tall fence, climbed up, and looked over. The sight of huge pools of stagnant water infuriated him. “We have the world’s biggest West Nile [virus] farm,” he said. “Each one of those big tanks has water in them, and it’s the biggest mosquito factory in the world.” The city’s web site tells residents to “dump or drain any stagnant water today” and encourages them to report violations. Further enticement comes with this warning, in boldface: “Stagnant water is a violation of City Code subject to fines up to $2,000.”

City officials agreed that the abandoned facility is a problem and said they’re still working on the solution. Cleanup efforts, including turning large portions of the plant into sports fields, started about 10 years ago but hit unforeseen hurdles. “It’s moving slow, but it is moving,” said Brian Boerner, director of the city’s Environmental Management Department. “It’s not something you can do overnight.” The city water department is overseeing the plant and participating in a voluntary cleanup program supervised by the Texas Commission on Environmental Quality, with a completion date scheduled for 2012. The city sends regular reports to TCEQ on cleanup activities, and TCEQ will review the site at the end of the project to ensure that the remediation meets state standards.

The state agency allowed the cleanup project to be divided into stages. Two of the stages involved turning the sewage plant’s old drying beds and aeration areas into sports fields for the sprawling, 500-acre Gateway Park, which stretches along the Trinity River near I-30 and Beach Street. However, soil testing by the city revealed low levels of environmental contamination in the soil in 2002, and the soccer and rugby fields were closed. “The softball fields never showed any levels that were considered harmful,” Boerner said. After remediation, the soccer and rugby fields were reopened in December with much hoopla. The rest of the cleanup, including the abandoned tanks, remains to be done. “As for the standing water, we never had a complaint on this before,” Guguliuzza said.

The city works closely with Tarrant County on its mosquito surveillance program and has seen no reports of residents in the park area getting sick with West Nile and no reports of larvae, Boerner said. “To date we have no reason to believe there is an increased risk for exposure because of the standing water there,” he said. That’s little comfort to residents who have long accused the city of treating the East Side like a dumping ground. “It never occurred to me they would leave something over here that is potentially dangerous for 30 years,” said community activist Wanda Conlin, who wasn’t aware of the abandoned tanks and stagnant water. “It’s kind of beyond the imagination, but somehow it doesn’t surprise me.” City records show 13 positive tests for West Nile virus in humans in 2006, including three cases in East Fort Worth, but none from the ZIP code that encompasses Gateway Park.

The remainder of the cleanup will be folded into the Trinity River Vision project’s plan for flood control and economic development. Building a bypass channel for the Trinity just north of downtown is expected to increase the water speed during rains. Federal law prevents making changes that can cause flooding problems downstream, so Fort Worth will need a large holding area to slow the current. The old plant will become part of this flood storage area after it is cleaned to meet environmental standards, using Trinity River Vision money, Boerner said. The city’s cleanup efforts and its timeline at the 143-acre abandoned plant are meeting state requirements so far, TCEQ spokeswoman Andrea Morrow said. After the cleanup is finished, only a small portion of the plant will remain. The Village Creek and old Riverside plants share some of the same water collection infrastructure, and the Water Department will maintain a small area of the old plant for access to sewer lines.