Marijuana makes you mellow, so movies about people who smoke lots of marijuana usually try to be mellow. 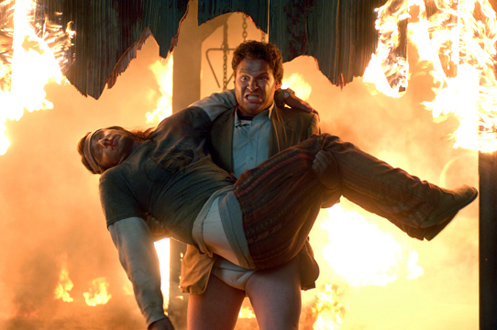 Not Pineapple Express; it’s the opposite of mellow, with a dangerous, out-of-control air that you wouldn’t expect from a pothead comedy. Unusually violent, the film kills off several characters onscreen, and the two protagonists spend much of their time in a state of freaked-out paranoia as they run from assassins. The story lurches uneasily from episode to episode, and with its loose structure and nervous energy, this movie often feels like it’s about to implode. Yet it never does and instead emerges as the summer’s funniest and most volatile comedy.

The movie takes its title from the name of a particularly potent strain of weed sold by Saul (James Franco) to Dale (Seth Rogen). The latter is a 25-year-old process server who dates a high-school girl (Amber Heard) and combats the boredom of his job by smoking as much as he can. Messy as his wardrobe and life are, he’s a picture of orderliness compared to Saul, a dealer whose only deep thoughts are applied to improving the design of joints. When Dale goes to serve a subpoena on Ted (Gary Cole), the drug kingpin who supplies Saul’s grass, he accidentally witnesses Ted and a policewoman (Rosie Perez) commit a murder. In a panic, Dale flees and drags Saul along with him, followed closely by Ted’s hired killers, put on their scent by the Pineapple Express that Dale leaves at the scene.

The DELETE is by Superbad scribes Rogen and Evan Goldberg. Yes, this is yet another comedy from the Judd Apatow stable, but it feels different because it’s directed by David Gordon Green. You’ve probably never heard of him, much less seen one of his movies, but this independent filmmaker is a blazing talent with a highly developed, idiosyncratic style marked by attention to local detail and a gentle, unhurried lyricism. (Read: His movies are slow.) Still, his style has proven extremely adaptable to melting romance (All the Real Girls) or crushing domestic tragedy (Snow Angels).

None of Green’s previous work suggests that he can execute a terrific car chase, yet that’s exactly what he does in the middle of this movie, which is packed with action sequences better than the ones in The Dark Knight. Earlier in the film, Saul and Dale try to physically restrain a drug-trade middleman named Red (Danny McBride) from phoning the killers with their location. The tone is broadly humorous – the characters don’t know how to fight (Red punches Dale’s ass several times), use non-lethal objects as weapons (a pocket vacuum cleaner, a bong, a kitty litter box), and pepper the fracas with inane comments. (“It’s my cat’s birthday today!”) Yet the scene is harrowing too, because the guys are drawing blood and grimacing in well-acted pain when they’re hit and also because you can feel the life-or-death desperation in their struggle. The laughter in this movie is frequently tinged with dread like it is here, and it gives this comedy its unique vibe.

Rogen cuts an impressive figure as an unlikely action hero, but even more surprising is Franco’s comic turn, at least to viewers who haven’t seen him on TV’s Freaks and Geeks. This actor’s buff good looks have typecast him in action flicks, most notably the Spider-Man films, but he’s a revelation as a long-haired, unshaven, goof in Guatemalan pants – check out the laughs he creates out of Saul’s fog of incomprehension when Dale says his car’s battery has died. Clearly Franco deserves more chances to clown around.

The movie does have one entirely predictable scene with a tied-up Saul and Dale inadvertently simulating sex while trying to wriggle free. The opening black-and-white sequence parodies 1950s science-fiction films, and while it’s not bad, it has no bearing on the rest of the movie. Still, the comic material is plenty rich enough to compensate for the odd misfire. Saul exults about Pineapple Express, “It smells like God’s vagina! … It’s almost a shame to smoke it. It’s like killing a unicorn!” Late in the film, Dale lectures Red on karma: “You act like an asshole in this life, and you come back in the next life as a worm, or a cockroach, or an anal bead. But if you do something heroic, you get to come back as an eagle. Or a dragon. Or Jude Law.” Big laughs also arise from Kevin Corrigan and Craig Robinson as a touchy-feely couple of hit men and a quiet family dinner that turns explosive when Dale is shot at by his girlfriend’s rifle-toting dad (Ed Begley Jr.!).

Refreshingly, Pineapple Express makes no pretense that its main characters will grow up; Dale and his 18-year-old girlfriend both realize he’s too immature for her in a hilarious tearful phone call. Instead, the movie ends in a massive shootout that releases all the tension the film has accumulated. This big conflagration is the perfect way for this unstable comedy to go up in a sweet cloud of smoke.