Texas Ballet Theater may be down financially, but it isn’t out artistically. Last weekend’s performances of Mozart’s Requiem and Stormy Weather at Bass Performance Hall showed the group to be in better shape than ever.


One of the joys of director Ben Stevenson’s six-year tenure has been watching young dancers – some of whom followed him here from Houston Ballet, his former company – develop into top-notch performers. Several were showcased in Stormy Weather, his tribute to Judy Garland and to the dancers themselves, who helped raise more than $180,000 for their company over the last couple of months. 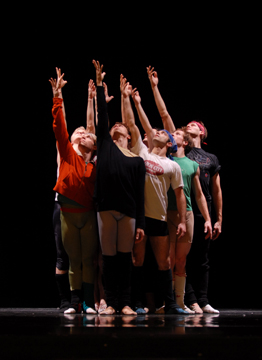 The all-female ballet opened on a stage with just a rehearsal barre dead center and, hanging on the rear wall, the dancers’ logo, “Get Behind Your Ballet.” After a six-woman ensemble tribute to Garland’s taped singing of “Stormy Weather,” Carolyn Judson began a series of solos. With her bright smile and frisky personality, she really lit up “Zing Went the Strings of My Heart.” Julie Gumbinner, the once cool and distant dancer, has transformed into a warm and engaging soloist and gave a wistful, yearning account of “Somewhere Over the Rainbow.” And Leticia Oliveira, a former principal with the Houston Ballet who joined TBT last season and who has an exciting, snappy technique, showed us a gentle side with a soulful performance of “The Man Who Got Away.” Lisa Kaczmarek and Lainey Logan were wonderful mirror images of each other in “Me and My Shadow,” and Victoria Simo was impressive in “Just You, Just Me.”

Stevenson created the all-female curtain-raiser to provide a counterpoint to his Mozart’s Requiem, musically one of the first theatrical realizations of the funeral mass. The all-male piece premiered last season at Dallas’ Majestic Theater, where the small venue and taped music gave a chamber-like quality to the ballet that drew you into the onstage drama at a personal level. The intimate setting also allowed the anti-war undercurrent to come through clearly.

At the Bass Hall premiere last weekend, the dynamic was different, due mainly to the presence of the full Fort Worth Symphony Orchestra and Schola Cantorum, crammed into box areas on either side of the hall. Plus, the larger stage let the dancers spread out and open up, their heroic dancing matching the epic sweep of Mozart’s remarkable score.

Surely nothing is more musically intense than his Dies irae (or “Day of Judgment, Day of Wrath”), danced here with crazed fright by Peter Zweifel, nothing more sorrowful than Lacrimosa dies illa, performed by Lucas Priolo, who put aside his usual role of handsome prince to be brought to his knees in anguished grief.

Andre Silva, TBT’s standout virtuoso who jumps and twirls with amazing speed and accuracy, was subdued in his performance of the Benedictus, navigating the choreography with softened edges and slower tempos as well as thoughtful insight. Carl Coomer brought strength and flexibility to the powerful Rex tremendae majestatis and the Sanctus, and Philip Slocki gave a moving performance as a tormented soul in the Agnus Dei.

Both the chorus and symphony were led handsomely by Jack Buckhannan. Any ballet conductor walks a fine line between preserving the music’s integrity and meeting the dancer’s tempo needs, and, for the most part, Buckhannan found his way through the thicket. Schola Cantorum did not sing with the purity of tone I remember from years ago but still gave a strong performance. There was a glitch Saturday night, when the split choruses during a heavily contrapuntal section went out of sync, making me cringe in anticipation of a train wreck. But a decisive entry by the sopranos served as a cue and got everyone back onto the same page. The vocal soloists were Lynn Eustis, Linda DiFiori, David Sundquist, and Jeffery Snider, all members of North Texas University music faculty. Accompanied by trombonist John Michael Hayes in the Tuba mirum bass solo, Snider was particularly impressive.

There aren’t many companies that have a male wing comparable to TBT’s. Saturday night’s audience rose with a roar at the end, standing and clapping even after the curtain came down and the lights came up.

While there were empty seats during the four-performance run, ticket sales exceeded projections by $21,000, which is good news. But there are still rough financial times ahead. TBT needs about $700,000 by year’s end to get out of debt. Once more, the dancers are stepping up to the plate, putting together a benefit program in Scott Theater in mid-November.