The owners of the proposed Pin Oak Creek Power Plant might justifiably have expected support from environmentalists and local residents for the natural-gas-burning facility they hope to build in Navarro County southeast of Corsicana. The proposed plant would use the best available pollution-control technology, and state agency staffers have given it a 95-out-of-100 rating for its expected clean-burning qualities.

But activists and community leaders in Navarro County aren’t so happy. They’re tired of finding themselves surrounded by more and more power plants and other industrial pollution sources. And before the Pin Oak plant or anything else gets approved, they want the Texas Commission on Environmental Quality to start monitoring the county’s air quality, to see just what is already getting dropped on them. 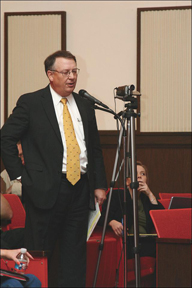 TCEQ staffers say the Pin Oak plant would not discernibly add to the ozone levels in areas – including Dallas and Tarrant counties – that are essentially downwind of it. But the proposed facility might affect Tarrant residents in another way: by using large amounts of water from the huge Richland Chambers Reservoir that helps supply the water needs of Fort Worth and communities in 10 surrounding counties.

A recent public meeting held in Corsicana by the Texas Commission on Environmental Quality proved to be a lightning rod for controversy over construction of the Pin Oak plant. Nearly a dozen people stepped up to the microphone during a contentious Q&A session, and 50 more gave formal comments afterward.

TCEQ staff members confirmed that the gas-fired plant will not “discernibly change” ozone levels downwind of the facility and will use the best available control technology to combat nitrous oxide emissions. TCEQ technical reviewer Erik Hendrickson said that on a scale of 1 to 100, with 100 the cleanest possible use of fossil fuels, Pin Oak Creek’s design merits a 95 or better.

In a follow-up phone call with Fort Worth Weekly, Hendrickson explained that gas-fired Pin Oak Creek’s draft permit allows for 239 tons of sulfur dioxide to be released per year at most. By contrast, Big Brown now emits between 80,000 and 90,000 tons of that pollutant annually.

Pin Oak Creek will release about two parts per million of NOx per year, while Big Brown currently emits 120 ppm NOx per year – and that’s after installing state-mandated abatement equipment five years ago. Even modern new coal technology coming online at the Sandy Creek Power Plant in Riesel, east of Waco, is expected to release 36 ppm of NOx annually.
Natural gas burns more cleanly and doesn’t release mercury and other pollutants that bedevil coal. Yet despite Pin Oak Creek’s relatively green profile, a number of Navarro County residents challenged TCEQ’s permitting process and voiced concern that it didn’t take into account their smoggier neighbors. To their north lies Ellis County, home of the Midlothian industrial corridor and the Dallas/Fort Worth air quality non-attainment area. To their south is Freestone County, home of Big Brown and other coal-fired power plants. Despite these threats, Navarro County has no monitoring stations to provide local air-quality data.

Hendrickson sought to reassure those at the Corsicana meeting that TCEQ’s technical review was based on a “conservative analysis” concerning “representative data” of worst-case scenarios from elsewhere in Texas, fed into a computer modeling program approved by the U.S. Environmental Protection Agency.

State District Judge John Howard Jackson of Corsicana stepped forward at the meeting to challenge the state’s methodology. He believes that the extremely dirty coal plants in the surrounding area bring pollution in on prevailing winds. He and other Navarro County public officials have already sent a formal request to the top levels of TCEQ management, urging them to monitor the air in Navarro County before new plants are built, but have received no response.

Without knowing how much air pollution is currently present in the area, Jackson said, it is impossible to make sound decisions or accurately assess the performance of the new plants once they’re built. TCEQ representatives defended the scientific basis for their calculations and suggested that the low population density in Navarro County is the reason there are no local monitoring sites.

Pin Oak Creek isn’t the only energy company with eyes on Navarro County. Navarro Generating LLC hopes to build a smaller gas-fired power plant at FM 1394 and Southwest County Road 2100, approximately 3.3 miles southwest of Richland. However, Navarro’s parent company, Australia-based Babcock and Brown, is currently undergoing a financial credit crisis and its stock trading has been suspended. Project manager Chris Shugart said that Navarro Generating’s power plant permitting still remains on track. He told the Weekly by e-mail, “We’re confident that development at that site will continue as appropriate regardless of the outcome of the restructuring under way within Babcock and Brown as a whole.”

Neither power plant is welcome from Vicky Prater’s perspective. She leads a local grassroots group, Citizens Opposing Power Plants (COPPS) for Clean Air, whose members were present in force at the Pin Oak Creek permit hearing. Prater is riled because the power plants will take water from the Richland Chambers Reservoir, water that Prater believes drought-challenged local residents are entitled to and need more urgently.

Richland Chambers Reservoir is controlled by the Tarrant Regional Water District, which sells water to Fort Worth, Arlington, and a host of other municipalities as well as to industries and businesses across a swath of North Texas. According to spokesperson Chad Lorance, the district is obligated to meet water needs “without discrimination.” So they must give power plants and industries just as much access to water as they give to thirsty residents and their livestock. He said the new plant could use a little more than 2 percent of the water the district is allowed to take each year from Richland Chambers.

“As long as we have water, we have to meet those needs,” Lorance said.

Prater was thrilled to learn recently that TCEQ has approved a contested hearing for the Pin Oak Creek facility. According to Hendrickson, a couple of hundred people contested the permit application, so it will now go to the State Office of Administrative Hearings for a six-month process. Then TCEQ commissioners will decide whether to grant the permit as is, grant it with changes, or deny it.

Wendi Hammond, an attorney affiliated with the COPPS group, remains skeptical of the state’s modus operandi. “Everything with the state is ‘show us the problem and then we’ll fix it,’ ” she said. “They haven’t fixed it yet for the D/FW area, so what makes them think they’ll fix it here?” New power plants in Navarro County could contribute pollution to the smoggy Dallas/Fort Worth region, which is already in violation of national air-quality standards. Hammond believes, therefore, that to earn the right to operate, power companies should be required to first mitigate their pollution. “You can’t add more to a pool that is overflowing and flooding,” she said.

“Compared to Big Brown, Pin Oak Creek is a clean plant,” Prater acknowledged. “But you have to realize the people that live on Pisgah Ridge” – a rural area of Navarro – “don’t want nine million-plus more pounds of emissions falling on their heads, on their children’s heads, or on their land and their livestock. We are already bombarded by every coal-fired power plant south of us.”