How strange it is to watch Milk right now, after the election we’ve just had. No one could overlook the irony of three states voting to ban gay marriage on the same day that the country as a whole elected its first African-American president. At such a conflicted time in history for gay Americans, I wish I could report that this film biography of Harvey Milk is an undisputable masterwork. It’s not, but it is smart, informative, and entertaining in large measures, and if this movie wins the Oscar that Brokeback Mountain was cheated out of, I won’t mind too much. 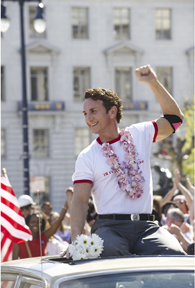 Milk was a Jewish New Yorker who worked various jobs in insurance and investment banking until 1972, when he dropped out, came out, moved to San Francisco, and set up a camera shop on Castro Street, the heart of that city’s gay community. Yet homophobia was strong even there, and Milk quickly realized that gays and lesbians wouldn’t be safe until they had political power. After several failed campaigns for office, Milk rode his voting base’s support and some favorable redistricting to become America’s first openly gay man elected to public office, winning a seat on the San Francisco City Board of Supervisors in 1977. Less than a year later, he and mayor George Moscone were murdered by city supervisor Dan White, a political enemy who fit the profile of a repressed homosexual lashing out. Sean Penn portrays Harvey, and the movie is structured as a series of flashbacks springing from memoirs that Harvey dictates into a tape recorder in his kitchen, to be played in the event of his assassination. (The real-life Milk did in fact make such a tape.)

Dustin Lance Black wrote the film based on interviews and Rob Epstein’s excellent 1984 documentary film The Times of Harvey Milk. The result is rich in historical detail, recounting both Harvey Milk’s meteoric political career and the prejudice that he was fighting in the culture at large. We’re shown footage of pop singer Anita Bryant’s loathsome anti-gay activism, as well as older newsreel clips of men being arrested for homosexual activity – striking how they’re all covering their faces in shame. One big error: The word “African-American” slips out, a term that was not in use in 1978. That aside, the time and place are evoked lovingly and exactly, with much of the film shot on location on Castro Street.

The acting is this film’s glory. Everyone else has noticed Penn’s uncommon warmth and sweetness in this role, qualities this actor isn’t exactly known for. What I noticed is his interpretation of Harvey Milk as lacking a politician’s natural temperament. We see that Harvey has a pol’s talents: thinking strategically, recruiting talented staffers and giving them suitable jobs, instinctively mugging for crowds or cameras. He doesn’t love the attention that comes with the job, though, not least because it brings him death threats. You sense that if this guy had been born into a more tolerant world, he’d have remained a quiet insurance man. He steps up, though, because the gay community needs visible leaders, and no one around him is better equipped. The dissonance between Harvey’s retiring nature and his high public profile surfaces everywhere in Penn’s awkward but righteously burning performance, whether he’s gesturing with one arm to exhort his followers to action or nervously giving voice to their outrage after a political defeat. Penn shows us Harvey’s passionate belief in his cause pushing past his unease in the spotlight, which is not only endearing but makes us appreciate Harvey Milk’s courage all the more. This is one of Penn’s all-time great performances.

He’s not alone in his excellence, either. Josh Brolin plays Dan White and does his best work in scenes when he’s just sitting still, projecting White’s deep unhappiness by seeming about to burst out of his skin. James Franco further proves his range by giving a starchy performance as Harvey’s boyfriend Scott Smith, while Emile Hirsch creates a memorable character in Cleve Jones, a skinny, aimless street hustler who finds his calling as a community organizer. (The real-life Jones went on to create the AIDS quilt.) Providing a welcome female presence is Alison Pill as a campaign manager who freaks out most of Harvey’s gay male staffers with her self-confident directness and lesbian butchness.

The film ends by stating that Harvey Milk’s legacy lives on after him, and I wish director Gus Van Sant had found a more galvanizing way to say that, like Spike Lee did at the end of Malcolm X. Then again, maybe that’s just me. Certainly the understated power of Harvey’s final speech (concluding with the indelible line “You gotta give ’em hope.”) is in keeping with the man’s reticence. This historical opera may be missing the last bit of oomph that would sweep everything before it, but there’s no denying that Milk finds a fevered, pulsating joy in its story of an oppressed minority winning its first taste of political power. This a movie for our historical moment, and as you leave the theater and see our world so different from Harvey Milk’s, you might reflect that it’s all change we can believe in.