When this debut disc by a trio from the unlikely birthplace of San Pedro, France, arrived in a blaze of hype from muso-rockcrit-historian Julian Cope’s influential Head Heritage web site, I was a mite skeptical. The search for more and bigger rock ‘n’ roll thrills – those often elusive “raw wails from the bottom of the guts” famously championed by Lester Bangs – has bred a form of X-treme! rock. 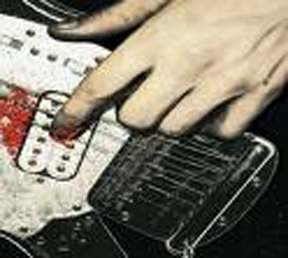 Japanese bands like High Rise, Mainliner, and Les Rallizes Denudes perfected – and made entire careers out of – the monolithic slabs of sound originated by White Light/White Heat-era Velvet Underground and Vincebus Eruptum-era Blue Cheer. Take those influences, add a dollop of ’70s New York “no wave” noise, and you’ve got an idea what these Gunslingers are up to.

“Into the Garage” starts things off with a thunderous salvo from drummer Antoine Hadjioannou before guitarist-singer Gregory Raimo unleashes his acidulated fuzztone thrash over the rhythm section’s clatter and clangor. Here and elsewhere, Raimo’s echo-laden vocals – spouting incomprehensible gibberish – evoke a zanier version of Les Rallizes Denudes leader Takashi Mizutani. (Either that or a demented insect trying to sing the Trashmen’s “Surfin’ Bird.”) On the 13-minute tour de force “Light Slinger Festival,” Raimo lays down a sonic barrage of atonal guitar fury, riding his whammy bar into feedback oblivion, while bass and drums bash away with relentless abandon. “The Minister’s Black Veil” starts out with backward-masked weirdness, giving way to a blast of mutated surf punk fury, its title inspired by a Nathaniel Hawthorne short story (quite literate, those Euros are). Gunslingers’ music is unremitting in its brutal assault – and that’s meant as a compliment. They’re playing at the Chat Room Pub on March 18 with The Great Tyrant and Spindrift. Bring earplugs.