Ever since Leonardo DiCaprio and Kate Winslet signed on to star in Revolutionary Road, the Hollywood publicity machine has buzzed nonstop about these stars reuniting for the first time since Titanic. As you may have heard, they are not looking to duplicate the romantic chemistry they had in James Cameron’s 1997 epic. Instead, they portray a married couple who are constantly at each other’s throats, and if you had a diabolical imagination, you could envision Titanic’s Jack and Rose aging into the boring, bickering married couple that you see in this movie.

The makers of Revolutionary Road do indeed have a dash of diabolicalness (I looked it up, that’s the word) in them, but not enough to give this film anything like the dramatic power that it’s supposed to have. 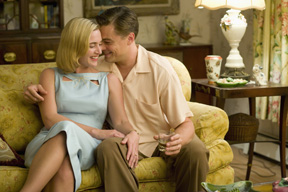 DiCaprio and Winslet play Frank and April Wheeler, who are raising two kids in a cookie-cutter Connecticut suburban house in the 1950s. They’re pretty well off thanks to Frank’s job in the marketing department of a business-machine manufacturer in Manhattan, but they think they’re better than their highly conventional existence. Frank dreams of living a bohemian life in Paris, where he visited while serving in World War II. “People are alive there, not like here,” he exults. “I want to feel things, really feel them.” The woolliness of such sentiments is an ominous sign. April’s similar discontent inspires her to draw up an ill-considered plan to pull up stakes, move to Europe, and do secretarial work for the U.S. government while Frank figures out what he wants to do with his life. Like everyone else’s plans in this movie, it’s doomed to failure.

Some of the early reviews have questioned the wisdom of casting megawatt movie stars as such weak and hopeless characters. I see the logic of using DiCaprio and Winslet – they’ve already proven they have a rapport, and here it’s put to different use by having them hurl vitriol at each other for much of the film. They have a good go at it too, but they never generate enough rancor to disturb this movie’s placid surface. That job falls to Michael Shannon as the Wheelers’ mentally ill acquaintance who turns one of their dinner parties into a disaster by laying bare their pretensions. The untameable Shannon shows his more famous co-stars how it’s done and walks away with the acting honors.

The DELETE is adapted (faithfully and intelligently, by Justin Haythe) from Richard Yates’ 1961 novel by the same venomously ironic title. The book is a forgotten classic for sound reasons – classic because of its sharp prose and ruthless insights into its characters’ self-deceptions, forgotten because its story is so relentlessly depressing. Like the book, the film subverts the hallowed American ideals of self-improvement and personal freedom. Frank and April’s attempts to lead more unusual and interesting lives only cause unhappiness and pain. Other movies say that if you hate what you do, do something else. This movie says if you hate what you do, stop hating it. This is bracing on the page, but on the screen it proves to be anything but.

The main reason for that is director Sam Mendes, who is Winslet’s real-life husband, though this is the first time he has directed her. If you’ve seen any of his three previous films, you know that he can’t help but arrange the screen into scrupulous little compositions and polish every surface to a bright gleam. He loosened up his visual style a bit in Jarhead, but here his visual perfectionism is back to its usual suffocating form. He seems to be trying to evoke Douglas Sirk’s opulent 1950s weepers, not a bad thing to aim for. The lush period jazz on the soundtrack is gorgeous aural wallpaper, and the cinematography by Roger Deakins is so yummy you’ll feel like licking the colors off the screen. It all seems to mock the Wheelers; you may well ask yourself why they’re so miserable when they live in such a beautiful place.

The prettiness winds up narcotizing you to any deeper meaning that this would-be critique of consumerism and anti-consumerism might be trying to convey. Other dramas set in prosperous postwar American suburbia have found the roiling emotions and social iniquities beneath the snazzy modernist décor, like Todd Haynes’ Far From Heaven and more recently the TV show Mad Men. Mendes tries to evoke these, but his film is so tidy and well-mannered that it squeezes out the messiness and unpredictability of the lives that he’s dealing with. All the plot developments seem prefabricated here, and this is never more apparent than in the movie’s ending, when one character who should be hemorrhaging to death leaves only a cautious little splotch of blood on the carpet. The sunshine and open spaces in Revolutionary Road should amplify the emotions in the story, but they only deaden them instead. For a movie that’s supposed to be a searing domestic tragedy, this has only marginally more impact than a promotional video for a new housing development.