Full disclosure: I listen to SportsRadio 1310-AM The Ticket quite a bit, which means I’m a P1, a.k.a. a devoted Tickethead. I’m also in the station’s coveted 25-to-54-year-old male demographic. I’ve been a guest on some of the shows and contributed to its Fax Fodder segment some years ago. And as announcer Greg Williams advised us so often, I never  forget about the Pajamagram.


So I have an inherent interest in The Ticket: Full Disclosure, recently released in celebration of the station’s 15th anniversary. Written by Scott Boyter, editor of the Dallas-based Sports Page Weekly, Full Disclosure is being advertised as a tell-all book. Well, is it? Eh, not quite. 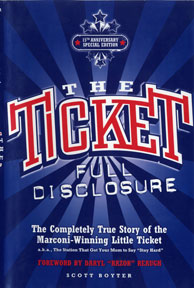 The book may have been written by Boyter, but Ticket corporate management, according to several sources, retained control of the content, leaving readers with just one long version of Aren’t we all great over here at The Ticket and Look at how successful we’ve become and Man, we are going to kick ass in every ratings book from here on out and so forth.

But you don’t need anyone to tell you about The Ticket’s control. Just look at how the book is being sold: You can’t buy it online or at bookstores, only at Ticket events, including the station’s annual Tickestock, sort of a P1 cult party. To the station, Full Disclosure is really nothing but another marketing tool. But the way it is being sold begs a basic question: If this book is a marketing tool, why not get it in front of as many sports fan eyeballs as possible?

The first 80 pages give a bit of the history: how hard it was to get start-up financing, the obstacles faced in building an audience. This is all stuff the station’s hosts talk about every year around the Ticket’s birthday.

From there the book gets into glowing profiles of the hosts, with, once again, not much in the way of revelation. The most popular on-air personalities – morning hosts George Dunham, Junior Miller, and Gordon Keith, and afternoon drive-time host Mike Rhyner – mostly offer just the usual blather about how the listener is so important to them. Nothing about how the Burrito Jimmy and the Overcusser bits went from ideas to funny radio.

Seriously, what about how Dunham got wasted with Cowboys owner Jerry Jones in New Orleans one night, which helped Dunham get the public-address announcing job at Texas Stadium? What about Keith’s getting arrested at Lambeau Field for stomping on the Green Bay Packers’ “G” logo at midfield? What about how idiotic players can be in the locker rooms? What about what Jones thinks of the station’s ostentatious “Fake Jerry” character? Or what about “Fake Wade,” a parody of the Cowboys coach as a mentally fragile redneck? None of that is in the book.

We don’t learn a single thing about what goes on behind the scenes at this station that has cult status among many of its listeners. All these talk show guys get to do what many men dream of, like going to the Super Bowl every year. They hint on the air about all the hijinks they come up with during Super Bowl week, but we don’t get any of that here. The Ticket has had a feud with a Baltimore talk show guy for more than a decade, and it escalated this year into an actual brawl. Tampa police were called in. But nary a word is mentioned about the feud in the book. And Boyter’s writing style steers the book away from those kinds of musings. The text is almost all quotes from the station hosts and management: Predictably, that doesn’t provide a tell-all narrative.

I’m not saying there aren’t some interesting parts in Full Disclosure. The profiles of hosts Bob Sturm and Dan McDowell are both good, giving readers a taste of what it’s like to work your way up through the grueling small-market radio industry. (McDowell almost got fired at one station for referring to soft-rocker Neil Diamond as “The Jewish Elvis.”) Also, Greg Williams, who got canned from the station’s popular Hardline show for abusing drugs, chimes in, mostly going over territory that’s already been covered on-air but also pausing to add some insights. Even avid listeners might not know that at the beginning of the end, his relationships with his co-workers had deteriorated to the point of off-air shouting matches.

Clearly, Full Disclosure is meant to entice sports fans who aren’t P1s but know enough about the station to be curious. But if the average non-believer isn’t inspired enough to lean over and punch in 1310 on his AM dial, what makes Ticket honchos think he’s going to drive all the way to Plano – or wherever else subsequent Ticket events may be – to plop down 25 bucks for a book?