Talking records with an Aussie chum recently, I professed to be impressed that the Beatles’ first album was recorded in just 10 hours. “That’s nothing,” he said. “X made X-Aspirations in just five.” 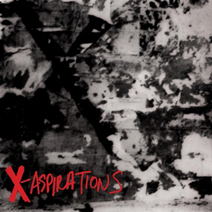 The band in question was formed in Sydney the same year as the similarly named L.A. unit led by John Doe and Exene. Aussie X bassist Ian Rilen was a founding member of the obstreperous Rose Tattoo, while singer Steve Lucas took up guitar only after X’s original axe-slinger died in his sleep following a gig. Their original intent when they went into Trafalgar Studios with producer Lobby Loyde – guitar god of the Coloured Balls, favorite of the proto-skinhead “sharpie”-style cult – was to demo some songs for a possible single. Five hours later, they emerged with a completed 14-track album., reissued recently.

It’s difficult to imagine music more minimal than this. The band dynamic works off the interplay between Rilen’s rib-thudding bass and drummer Steve Cafiero’s tribal thump. Over the top, Lucas shrieks and howls with malicious menace, using his guitar primarily for punctuation. “I Don’t Wanna Go Out” – surely one of the great punk singles – takes the ennui of the early Stooges and Ramones and jacks up the intensity a few notches. “Delinquent Cause” contains the immortal line, “We’re just the victims of the liquid god,” while “Suck Suck” and “Good On Ya Baby” cast aspersions on the squares. The band’s cover of John Lennon’s “Mother,” released as a single and included here as a bonus track, sounds even more anguished than the primal-screaming original.

X made its Brit and Yank contemporaries sound positively tame. Cafiero left the planet in 1988, and Rilen followed in 2006. But while they were here, they left their mark.