Duplicity is the second film by Tony Gilroy, the longtime screenwriter who made a smashing directorial debut in 2007 with Michael Clayton. You can’t blame Gilroy for wanting to follow that up by doing something fun, especially since he turns out to be just as good with light comedy as he is with heavyweight drama. This super-twisty caper flick is the most purely enjoyable movie I’ve seen so far this year. How nice.


The main characters are ex-MI6 agent Ray Koval (Clive Owen) and ex-CIA agent Claire Stenwick (Julia Roberts), whom we first see as operatives hooking up in Dubai in 2003. In the present day, these former spies have both crossed over to the private sector, running security and counterespionage for rival beauty-product conglomerates in New York. Impatient with their small-fry jobs, Ray and Claire dream of crooking their employers out of $40 million and running off to Rome to live in luxurious retirement. Fortunately, the egomaniacal tyrant CEOs whom they work for (Paul Giamatti and Tom Wilkinson) detest each other, and when one of them lets his inner circle in on an imminent product launch that’ll revolutionize hair care, Ray and Claire use their bosses’ mutual hatred to put a long-considered plan into action. 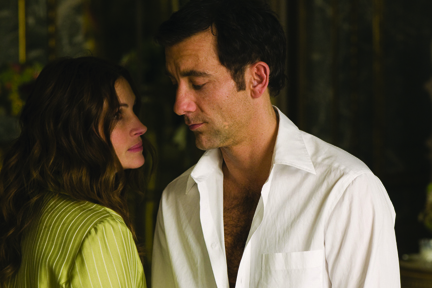 This is only the jumping-off point of a plot that’s labyrinthine enough to confound Theseus and the minotaur. Ray and Claire are running double, triple, and quadruple deals with everyone they meet, and you’ll need several viewings just to track them all. (I found a small chink on my one viewing: With everybody here chasing a chemical formula, it’s strange that the company that’s trying to steal it doesn’t think to have a chemist on hand to verify that said formula is what it’s claimed to be.) These firms analyze each other’s every move in minute detail like Kremlinologists, which forms an effective paranoid backdrop to the action. Plus, it’s funny that they’re devoting such extreme security measures to the recipes for soap and shampoo. Ray and Claire run head-spinning smaller cons within the larger con, and many of their seemingly private conversations turn out to be staged for the benefit of people they know are eavesdropping on them. Even when they are truly alone, though, they can’t help but test each other and look for signs of betrayal, because they know that they’re both too good at lying to be trusted.

Gilroy unfurls this story cleverly, using a series of staggered flashbacks to let us think that Ray and Claire haven’t seen each other in years, only to reveal (through a conversation that’s repeated almost verbatim in another setting) that they’ve been working together for some time. Gilroy also reveals an unexpected touch with visual humor in the opening credit sequence, a slow-motion shoving match between Giamatti and Wilkinson on a rainy airport tarmac, with their suit-wearing flunkies running to break up the scuffle. This action film achieves a delirious pace even though its chase scenes are conducted only at a brisk walk (including a crackling bit with Claire having only a few minutes to find a rigged copy machine at a deserted corporate HQ), and it doesn’t spill a single drop of blood. The jaunty, sophisticated tone here recalls Steven Soderbergh’s Ocean’s films before the complacency seeped in.

More importantly, Gilroy makes intelligent use of his lead actors. This vehicle injects a dangerous new dimension into Roberts’ trademark charm. That twinkly smile of hers now seems like the wolfish grin of someone who slipped your financial information and your wedding ring into her purse while she was flirting with you. Roberts even wins huge laughs without her smile, particularly in an interrogation scene when Claire keeps the same contemptuous sneer frozen on her face toward a teary mid-level executive (Carrie Preston) who’s been duped by Ray.

The real driving force here is Owen, though. This actor isn’t widely thought of as an A-list leading man, but when he’s placed opposite high-powered actresses, he tends to raise both his own game and theirs. Whether it’s his old-school machismo, cutting sarcasm, or take-no-prisoners demeanor, something about him brings out an extra fire and energy from his female co-stars, whether it’s Cate Blanchett (Elizabeth: The Golden Age), Naomi Watts (The International), or Julianne Moore (Children of Men). Heck, he even faced down Angelina Jolie without quailing (Beyond Borders). Having worked together before in Closer, Owen and Roberts have each other’s conversational rhythms down, and given her history of responding to leading men who are willing to challenge her, it’s no surprise that the two leads throw off so many sparks. Owen’s sharpness is bracing as always, and seeing him a playful mood is a refreshing change.

Of course, you’d expect nothing less than a major twist at the end of a film like this, and though I’m not the biggest fan of the one here, it does leave open possibilities for a sequel. For everyone who’s complained that Hollywood only seems to put out grown-up movies during Oscar season, Duplicity may not be a great film, but it’s a brain-tickling diversion for adults, and it’s gracing our screens in the middle of March. That makes it at least worth stopping and taking notice of.