Your dose of cartoon escapism for this week: Monsters vs. Aliens. Between my reviews of Coraline last month and Journey to the Center of the Earth last summer, I’ve pretty much exhausted my thoughts for now on the new craze for 3-D movies.

That’s too bad, because I could use them here in this opening paragraph about the new animated film Monsters vs. Aliens, a movie about as deep as a Saturday morning cartoon, and one that pretty much evaporates from your memory during the closing credits. On the other hand, it looks a hell of a lot better than a Saturday morning cartoon, and it gives you a fair share of pleasure as it’s playing out on the screen. 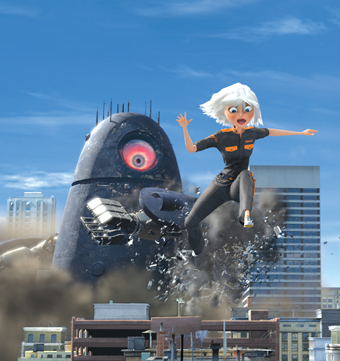 While some of the trailers and TV spots make this movie look like an ensemble piece, there is in fact a main character in the person of Susan Murphy (voiced by Reese Witherspoon), an ordinary woman from Modesto, Calif., who’s about to be married when a meteor streaks out of the sky and lands on her. The rock shortly turns her into a 50-foot giantess, and the U.S. government whisks her away to a secret military compound where she’s kept under wraps along with a 150-foot mutant caterpillar, an amphibious creature (voiced by Will Arnett), a mad scientist who’s turned himself into a human-cockroach hybrid (voiced by Hugh Laurie), and an all-devouring gelatinous blob appropriately named Bob (voiced by Seth Rogen). Her new friends have long become used to living in what is essentially a cushy prison, but Susan – who’s renamed Ginormica by the government – barely has time to adjust before she and the other monsters are called upon to defend the Earth from a four-eyed tentacled alien overlord (voiced by Rainn Wilson), who wants to conquer the planet and, to that end, sics his giant robot on the area around San Francisco.

The movie’s being hyped as an homage to 1950s sci-fi movies, but it’s too slender to perform even that small task. The story’s weaknesses are exposed during the film’s few attempts to be serious, like Susan trying to find inspiration in her newfound stature despite being dumped by her careerist TV-reporter fiancé (voiced by the ubiquitous Paul Rudd). That romantic subplot might have been good for some laughs if the filmmakers had been clever enough to play with the idea. Then again, maybe it’s best that the movie is too fast-paced and short (at 94 minutes) to waste much time on these.

Instead, the filmmakers devote most of their attention to two big action set pieces: the climax aboard the alien’s spaceship and the monsters-vs.-alien robot battle in an evacuated San Francisco. It’s nice to see San Fran used as a backdrop – steep hills, cable cars, Golden Gate Bridge, and all – for some large-scale (and reasonably well-executed) cinematic destruction instead of the usual New York.

As for the comedy, maybe the film’s retro sensibility is the reason why its few forays into pop culture fall flat, like when the buffoonish U.S. president (voiced by – who else? – Stephen Colbert) tries to establish first contact with the aliens by playing the theme from Close Encounters of the Third Kind on an electric keyboard and, subsequently, Beverly Hills Cop. Much better is the gag when the robot starts destroying stuff and the president tries to take it down himself. Colbert’s presence here is only one example of the film’s luxury vocal casting: an audibly unrecognizable Kiefer Sutherland as the barking general who commands the monsters, Amy Poehler as the alien ship’s computer, Renée Zellweger and John Krasinski as the couple who discover the robot during a weird non-makeout session in the woods. With such a loaded cast, it’s a shame that there isn’t enough comic material to go around.

It’s Seth Rogen’s clueless Bob who oozes away with the biggest laughs. As you might imagine, the animators have much more fun with this glowing blue shapeless mass than they do with the other characters. Yet it’s Rogen’s vocal presence and ad-libbing that makes Bob such amusing company, whether he’s confusing people’s genders, flirting with a minimally responsive molded Jell-O dessert, or allowing trapped drivers on the Golden Gate to escape to safety by eating the concrete highway dividers on the bridge. (That leads to a line that cracked me up: While the action swirls furiously around Bob, he’s off in the corner of the frame getting ready to down his seventh or eighth divider and saying, “Oh, I’m starting not to feel so good.”)

Things like this give Monsters vs. Aliens enough charm to get by, and make it the best of the recent glut of alien-invasion movies. While Knowing (see review below) and the remake of The Day the Earth Stood Still trade in fuzzy cosmology and preachy portentousness, comedies like this one and Race to Witch Mountain achieve what those 1950s science-fiction movies were aiming for – allowing families to have fun killing a spare hour and a half.