After Greg Mottola’s striking 1996 filmmaking debut with his comedy The Daytrippers, moviegoers heard no more from the director until two years ago when he was tapped to direct Superbad.

He wasn’t exactly hard up in the intervening 11 years, working steadily in television (Arrested Development, The Comeback, Undeclared). Still, it took Superbad‘s financial success to allow him to make his much gentler third movie Adventureland. This affecting piece of work, his best film yet, shows us that the big screen is where he belongs. 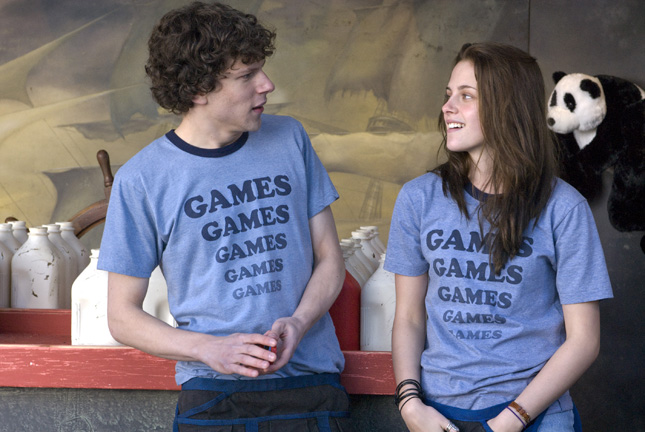 Mottola’s script is reportedly based on his own life. The film is set in 1987 in Pittsburgh, where recent college grad James Brennan (Jesse Eisenberg) discovers that his parents’ sudden cash-flow problems have scuttled his plans for graduate school and spending the summer in Europe. Needing a summer job, he finally finds a meager source of income running the carnival games at a crappy amusement park. There he falls desperately in love with Em (Kristen Stewart), the NYU student who tends the park’s video arcade and introduces herself to James by saving him from being knifed by a carnivalgoer over a giant stuffed panda.

Comedies about summer jobs are often about dealing with excruciating boredom and obnoxious specimens of the public. Indeed, James is saddled with his share of puking kids, angry drunks, and “Rock Me Amadeus” played repeatedly over the park’s P.A. system. (The rest of the soundtrack is thankfully filled with higher-quality period songs from the likes of the Replacements, Hüsker Dü, and Crowded House.) The comedy yields a piquant subplot involving James’ banter with Joel (Martin Starr), a shaggy-haired existentialist who affectedly smokes a meerschaum pipe. It also brings us a snappy running gag with an annoying kid (Matt Bush) who seems to exist for no reason other than to torment James, usually by punching him in the testicles and running off. The movie could have made better use of Saturday Night Live cast members Bill Hader and Kristen Wiig as the odd married couple who operate Adventureland, but there are enough gags to fill out its leisurely pace.

This movie is really more of a romance than a comedy. James’ infatuation with Em deepens when his dreamgirl turns out to have some serious problems, including a hateful stepmother and a major self-esteem deficit. That latter issue may be why she’s secretly sleeping with Connell (Ryan Reynolds), the older married guy who works as the park’s repairman and moonlights as a musician. (The kids revere Connell because he once jammed with Lou Reed. If they were older, they’d probably see how he’s coasting through life based on that one session, if indeed it actually happened.) James doesn’t know that Connell’s the reason why Em won’t have sex with him, and he drifts all too believably in the direction of another co-worker, a hot, shallow, totally available girl whom everyone calls Lisa P (Margarita Levieva).

As with most romantic films, the lead actors are the reason this works. Jesse Eisenberg has been playing feckless youngsters like James since 2002’s Roger Dodger. He seems cut out for it, possessing a slight build and tiny voice like Michael Cera, only without Cera’s expressiveness. (Chalk it up to Eisenberg’s beady eyes as opposed to Cera’s wide, saucer-like peepers.) However, Eisenberg is sharp and alert, and he can be convincingly vulnerable, especially in a less sympathetic role like he had in The Squid and the Whale. Here his offbeat rhythms jibe well with the character of a kid who’s smooth but not smooth enough. (When Em asks the virginal James if he ever had sex with his ex-girlfriend, he misses only half a beat before responding, “She was very sexy.”)

Speaking of sexiness, this is the first movie where Kristen Stewart displays a real erotic charge. (She’s 19, so it’s OK to say that now.) At the start she’s a mere object of desire, and she exudes ripeness and sensuality, in stark contrast to the pinched and cautious Eisenberg. In the movie’s latter stages, though, Em’s two relationships start to tear at her, and Stewart conjures up fear and self-hatred like we’ve never seen from her. The movie climaxes in a brief, perfectly punctuated scene in front of Connell’s house, where James and Em have it out on the street, and the pain in both actors’ faces illustrates the perils of falling in love better than anything in Twilight. If all you’ve seen of Stewart is her weak performance in that movie, her work here will be a revelation.

A scene like that earns the movie its coda when James catches up to Em in New York. The path leading to it is carefully prepared by Mottola’s scrupulous, unobtrusive direction and fine, compassionate writing. This filmmaker’s return to movies seems to fulfill the promise that he showed more than a decade ago, but even if that peters out, Adventureland is a coming-of-age romance that can be treasured for decades to come. l