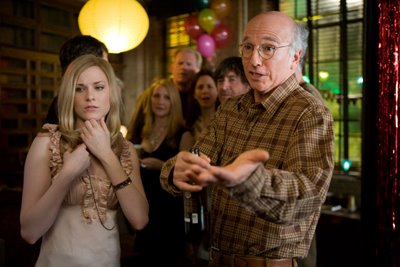 Boris is a trained quantum physicist who has abandoned his career and marriage after concluding that life is meaningless, the human race is spinning toward extinction, and other people are too stupid to see the truth. His eternally downbeat attitude is lightened momentarily when he takes in a ditzy homeless runaway with the ridiculously flowery name of Melody St. Ann Celestine (Evan Rachel Wood). Not only does he turn Melody into an intellectual carbon copy of himself, but he also gets her to marry him.

The relationship makes no sense on any level. Forget the age difference — how does Boris manage to attract any human companionship at all? Between his pessimism, hypchondria, and unearned air of intellectual superiority, he’s a one-track bore. After five minutes with the guy, we’ve had enough of him. (Compare Up‘s treatment of a similar theme, and Pixar’s movie is much more subtle, not to mention less icky.) Part of this springs from the miscasting of David. The collaboration of Allen with the star of TV’s Curb Your Enthusiasm was supposed to be heaven for fans of old-school Jewish humor, but David’s booming delivery turns the character into an overbearing, hectoring presence on screen. The role really needed Alan Arkin’s finesse.

A measure of salvation emerges when Patricia Clarkson parachutes into the movie around the hour mark to play Melody’s mother Marietta, who comes to New York searching for her daughter after her own life back in Mississippi has fallen apart. At first Marietta’s evangelical conservative views seem to make her a butt for easy jokes, but she turns out to be a better foil to Boris than Melody is. While Boris derides Marietta’s Christian beliefs as “superstition,” he’s the one who sings “Happy Birthday” aloud while washing his hands because he believes it gets the germs off. He groups Marietta in with the rest of the world’s “mental midgets,” yet he doesn’t notice that she’s submarining his marriage by setting Melody up with a handsome young English actor (Henry Cavill). Things get even more gleeful when Marietta becomes sexually liberated and takes up a photography career. Clarkson plays the part without an ounce of condescension and quite a bit of relish. Marietta should have been the main character of this movie.

Whatever Works muses about the randomness of love and the universe, and it’s no surprise that we’ve heard it all before – reportedly the script had sat on Allen’s shelf since the 1970s. However, there is a scene late in the film when Melody’s jilted and disconsolate dad (Ed Begley Jr.) commiserates in a bar with another man (Christopher Evan Welch) whose wife has left him. Dad is horrified and intrigued when it’s revealed that the other man’s “wife” is a male model. This Woody Allen film actually leads to some man-on-man action. That much, at least, is new. l

Sound of Metal: The Rest Is Silence