Michael Mann’s latest film, Public Enemies, is based on Bryan Burrough’s voluminous history of the early days of the FBI, when the fledgling bureau spent 1933-35 bringing down John Dillinger, the Karpis/Barker gang, Bonnie and Clyde, and others. From this book, Mann fashions a deluxe period piece that aims to pull in both the popcorn crowd and the prestige-picture fans. If you’ve seen any of his other entries like Heat (1995) and Collateral (2004), you would expect Public Enemies to be a visually lush, detailed, well-executed thriller whose 140 minutes will pass swiftly. It certainly doesn’t disappoint in that respect, though it’s missing something else. 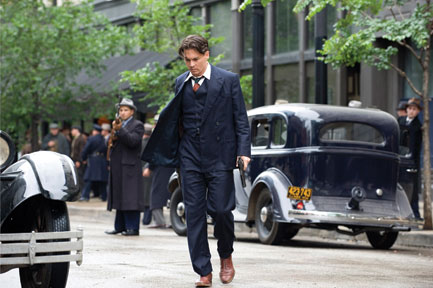 The movie narrows the book’s focus down to the hunt for Dillinger (Johnny Depp), the handsome, articulate, charismatic bank robber and murderer who nevertheless becomes a popular figure by expertly playing the press, depicting himself as an Indiana farmboy making a living and having a good time. Leading the manhunt for him is Agent Melvin Purvis (Christian Bale), whom we see at the beginning calmly gunning down a fleeing Pretty Boy Floyd (Channing Tatum in a brief cameo).

Much of the film hangs on the romance between Dillinger and Billie Frechette (Marion Cotillard), a coat-check girl he picks up at a Chicago nightclub. Just about every Michael Mann film has a romantic plotline, which is curious, because he’s not nearly as good at romance as he is at most everything else. We never understand why the robber is willing to risk everything for her. I think the problem might be Cotillard, the sumptuously talented French actress who won an Oscar for La Vie en Rose two years ago. She has acted in English before – she was in Big Fish and A Good Year – but she’s supposed to be playing a born-and-raised Midwesterner here, and there are imprecisions in her delivery everywhere, impressive though her American accent is for a foreigner. You have to wonder why Mann didn’t cast an American actress who would have been more comfortable with the idiom.

The Purvis half of the film holds more potential, with the agent portrayed as ignoring his better instincts when J. Edgar Hoover (Billy Crudup) orders him to use any methods, including torture and false imprisonment, to find Dillinger. Predictably and harrowingly, a beefy agent winds up beating Frechette to a bloody mess in an interrogation room. The movie oddly echoes The Dark Knight, not least because of Bale’s presence. He gives a subtle performance as a man who’s gradually hollowing out, but he never gets a chance to be searing as a lawman who gets the bad guy and loses his soul.

Adding to the movie’s impersonality are Dillinger’s criminal associates and Purvis’ agents, a faceless parade of white guys in suits and fedoras. We hardly get to know their names, let alone anything about them, so there’s no sting when they get killed. Contrast this movie with Heat: The longer, earlier bank-heist thriller is much richer because it fleshes out its subsidiary characters.

Depp gives the movie its occasional flashes of distinctiveness. (Peter Gerety steals the movie’s biggest laughs with his one scene as Dillinger’s showboating defense attorney.) Dillinger knows that his way of life is dying when a Mafia subordinate (John Ortiz) coldly lays out to him how the streamlining of organized crime operations makes bank robbers like him an unwanted nuisance. The actor’s sense of endangerment is balanced by his delight in his outlaw status; watch the slow smile that spreads over the arrested Dillinger’s face when he realizes that people are lining the streets cheering for him. We already know from Sweeney Todd that Depp can be magnetic when he’s evil. Here he shows a smooth, swashbuckling edge that’s compelling to watch, never more so than when he spins the spiel that sweeps Billie off her feet.

This wouldn’t be a Mann film without some cool action sequences, and there are two good ones that arise from the characters’ incompetence. The cackling psychopath Baby Face Nelson (Stephen Graham) turns a smoothly running bank job into a bloodbath, with dead cops, dead robbers, and dead civilians. The other is an extended shootout and car chase when Purvis’ overzealousness – and reliance on information obtained by torture – lead him and his men into an ambush, with agents dying and Purvis himself killing innocent bystanders when he mistakes them for gangsters.

Public Enemies climaxes with a stakeout of the Biograph Theater that’s intercut with footage of Manhattan Melodrama, the gangster movie that Dillinger was famously watching just before his death. (The film notes Cotillard’s astonishing resemblance to Myrna Loy, the lead actress of Manhattan Murder Mystery.) Like the rest of the movie, the sequence is handled with admirable dexterity and cool observation of Dillinger’s reactions to what he’s watching. You can admire them and still perceive the film’s overly familiar Mann-ly obsessions with the professionalism of cops and criminals, as well as the lack of human warmth. Well-turned and eminently watchable as this movie is, it’s never the grand operatic tragedy that it wants to be.