For years I detested Chris Columbus, the Hollywood director who spent the 1990s turning out sanitized, highly profitable family farces (Home Alone, Mrs. Doubtfire) and then spent the early part of this decade bloating the first two Harry Potter movies beyond watchability. So I’m surprised to find myself charmed by the Columbus who has emerged in the last few years. While he’s still no great filmmaker — he too often loses control of basic elements like tone and pacing – his movies are now subtler, more stylized, less moralizing, free of the deadening need to pander to the kids in the crowd, and infused with a certain maturity that looks good on him. This is true of his 2005 movie version of Rent, and it’s even truer of his winning, antic teen farce I Love You, Beth Cooper.


The words in the title are spoken by Denis Cooverman (Paul Rust), a nerdy straight-arrow kid who’s been named class valedictorian at his high school graduation. Commanding the full attention of the entire student body for the only time in his academic career, he uses his speech to nervously and brazenly declare his love for the head cheerleader (Hayden Panettiere), who’s only dimly aware of Denis’ existence. After the ceremony, he invites Beth to a post-graduation party at his house, though he’s somewhat amazed when she actually shows up along with her two marginally less hot friends (Lauren London and Lauren Storm). The rest of the movie takes place during the frenetic ensuing evening, as the girls treat Denis and his deep-in-denial closet case of a best friend Rich (Jack T. Carpenter) to a night they’ll never forget, not least because Beth repeatedly has to save Denis from being permanently maimed by her coked-and-‘roided-up soldier ex-boyfriend (Shawn Roberts). 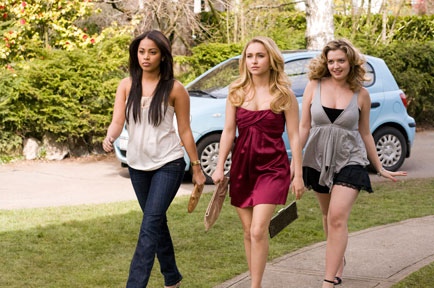 The script is adapted by Larry Doyle from his own novel of the same name. Doyle is a former writer for The Simpsons, and you can see the influence of the show in the film’s rapid-fire pace and satirical outlook on school life, as well as its comic devices like minor characters experiencing illuminating flashbacks: The school principal (Andrea Savage) recalling an unwelcome memory from her teen years is sharp stuff. The film’s funniest set piece is Denis’ encounter with the bully (Josh Emerson) who’s tormented him for the last four years. The scene’s big left turn is too good a joke to give away, but it’s hilariously played by the two actors.

Better still, I Love You, Beth Cooper cuts against the conventions of teen comedies, most notably because it shows the girls partying harder than the guys and draws its energy from them. In the novel, Denis has sex with Beth. The movie cuts this out, giving the relationship greater realism. More importantly, Beth, who drives and parties like a maniac, turns out to be nothing like the angelic girl of Denis’ fantasies. His close-up view of her destroys his illusions and reveals her as someone more interesting and less secure in her queen-bee status, particularly since her school days are now over.

The role is given a scintillating star turn by Panettiere, who seems to relish the chance to cut loose after three seasons of playing the virginal teen superheroine on TV’s Heroes. She finds the determination born of desperation behind Beth’s hell-raising and carries herself with full awareness of her own hotness while also mixing in flecks of self-doubt and envy of Denis’ intelligence. The scrawny, needle-nosed Rust spends most of the movie doing a merely acceptable job of comically geeking out. He matches his co-star for dramatic power only in the film’s last few scenes. The leads enjoy terrific support from Storm, who filches quite a few laughs as the dimwit in the group, and Alan Ruck and Cynthia Stevenson as Denis’ parents, who entrust their house to him so they can enjoy their own romantic getaway. You sense that only later in life will Denis realize how cool they are.

Not everything’s good here. Rich’s habit of quoting lines of dialogue from old movies is just as annoying on the screen as it is on the page, and there’s one false note, when our five main characters sing along in the car to Alice Cooper’s “School’s Out.” (One or two of these teenagers might know the words to this 1972 song. All five of them? No.) I Love You, Beth Cooper never drags, but it proceeds only in fits and starts when it should be hurtling pell-mell. Too slipshod and safe to be the Dazed and Confused of this generation, this comedy is still good enough to be the Risky Business of this generation, and that’s not a bad thing to be.