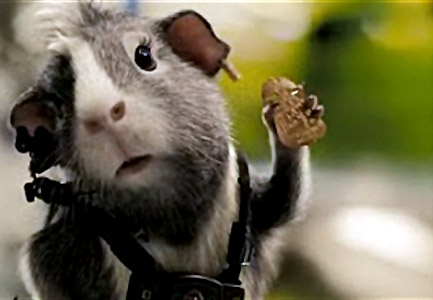 G-Force (PG) I am not making this up: A trained force of guinea pigs who are government agents try to stop a billionaire (Bill Nighy) from taking over the world. Also with Will Arnett, Zach Galifianakis, Kelli Garner, and Loudon Wainwright III. Voices by Sam Rockwell, Nicolas Cage, Jon Favreau, Steve Buscemi, Tracy Morgan, and Penélope Cruz. (Opens Friday)

Humpday (R) Lynn Shelton’s comedy stars Mark Duplass and Joshua Leonard as straight friends who decide to draw attention to their film project by including a hardcore sex scene between themselves. Also with Alycia Delmore and Trina Willard. (Opens Friday in Dallas)

Away We Go (R) Sam Mendes’ best film yet bears no resemblance to American Beauty or Revolutionary Road. This scruffy indie comedy stars John Krasinski and Maya Rudolph as a couple preparing to have their first child and free to choose a new city to relocate to. The episodic script by Dave Eggers and Vendela Vida begins with a couple of sitcom-broad chapters (including an off-target interlude with Maggie Gyllenhaal as a smothering New Age mom), but it hits stride with Chris Messina and Melanie Lynskey’s wrenching depiction of a couple unable to have children. Rudolph is revelatory in a quiet, resilient role, and she provides the most moving moment at the very end. It’s only half a great film, but that’s better than a whole mediocre one. Also with Allison Janney, Jim Gaffigan, Catherine O’Hara, Jeff Daniels, Carmen Ejogo, Josh Hamilton, and Paul Schneider.

Brüno (R) For a movie that features Sacha Baron Cohen waving his penis in the viewer’s face, this is unexpectedly thought-provoking. The English comic’s latest piece of performance art involves his impersonation of a flamboyantly gay Austrian fashionista and celebrity wannabe. Baron Cohen baits some eminently deserving gay-bashers, but he also turns his ridicule on liberal types, too, seemingly bent on testing how far their tolerance of Brüno’s idiocy will stretch. The character doesn’t have Borat’s guileless sweetness, which only makes his stunts more daring, especially when he travels to the Middle East and meets with a Palestinian terrorist leader. Baron Cohen is a clown willing to go further than most others in search of a laugh, and he finds a few huge ones here. Also with Gustaf Hammarsten.

The Hangover (R) It has some hazy spots, but it’s also funny enough to make your head hurt. Bradley Cooper, Zach Galifianakis, and Ed Helms play three friends who accompany a groom-to-be (Justin Bartha) on a bachelor’s fling in Las Vegas. The prologue takes entirely too long, but the laughs eventually kick in when the friends awake with no memory of the night before and the groom MIA. Director Todd Phillips (Old School) returns to R-rated territory and retains his sense of comic timing, injecting bursts of violence and surrealism that keep us from getting too comfortable. The cast is a tad off, but the laughs scored by random jokes (like the song about the tiger and Mike Tyson’s cameo as himself) make up for it. Also with Heather Graham, Ken Jeong, Rachael Harris, Mike Epps, Rob Riggle, Cleo King, Bryan Callen, Matt Walsh, and Jeffrey Tambor.

I Love You, Beth Cooper (PG-13) Unexpectedly winsome teen comedy stars Paul Rust as a nerdy high-school valedictorian who uses his graduation speech to declare his love for the head cheerleader (Hayden Panettiere, who looks eager to cut loose), who then proceeds to show him a post-graduation night of partying that he’ll never forget. Adapted from Larry Doyle’s novel, this rapid-fire film cuts against the conventions of teen comedies by showing the girls partying harder than the boys and reveals Beth as more interesting than the angelic dreamgirl of the hero’s fantasies. Chris Columbus directs in herky-jerky rhythms when the movie should be hurtling at pell-mell pace, but the strength of the writing and performances here still makes this the Risky Business of this generation. Also with Jack T. Carpenter, Lauren London, Lauren Storm, Shawn Roberts, Josh Emerson, Andrea Savage, Alan Ruck, and Cynthia Stevenson.

Ice Age: Dawn of the Dinosaurs (PG) The third installment of the animated saga has the gang finding a secret cavern under the ice where dinosaurs still roam. Basically, it’s the same plot as Land of the Lost. Too much of the film is taken up with Manny the mammoth (voiced by Ray Romano) becoming a father and his pals (voiced by Denis Leary and John Leguizamo) feeling left out of the family loop. There’s better stuff when the group meets a crazed survivalist weasel (voiced by Simon Pegg) who guides them through this unfamiliar world, but even this character – and a weird version of “Alone Again Naturally” rewritten from the point of view of an acorn – can’t lift this visually and comedically uninspired film from its doldrums. Additional voices by Queen Latifah, Seann William Scott, Josh Peck, Jane Lynch, Clea Lewis, Bill Hader, and Kristen Wiig.

Moon (R) Neat little science-fiction yarn stars Sam Rockwell as an industrial worker on the moon who’s been alone for three years and is starting to experience hallucinations just before his return to earth, including a clone of himself. There’s not quite enough plot or substance here to sustain the movie for its 90-minute running time. Rockwell, though, is excellent playing two different versions of the same character, and writer-director Duncan Jones (the son of David Bowie) filmmaking debut is impressive. The worker’s only companionship is a robot with a yellow smiley face (voiced by Kevin Spacey) that changes expression along with the mood. The robot is both sinister and funny; this is a tremendous performance by an inanimate object. Also with Dominique McElligott, Benedict Wong, and Kaya Scodelario.

Public Enemies (R) Michael Mann’s strangely uninvolving history piece focuses on the manhunt for bank robber John Dillinger (Johnny Depp) led by FBI agent Melvin Purvis (Christian Bale). The film’s romance between Dillinger and Billie Frechette (Marion Cotillard) is emotionally distant. While the Purvis half of the film has more potential, the tragedy of a lawman who catches the bad guy and loses his soul is never searing. There are some cool action sequences, the best of which is a nighttime FBI sting that turns into an ambush outside a bar in the woods. The film is eminently well turned and watchable, but it never reaches the operatic pitch it’s aiming for. Also with Stephen Graham, Spencer Garrett, Giovanni Ribisi, John Ortiz, Rory Cochrane, Peter Gerety, Madison Dierks, Bill Camp, David Wenham, Stephen Dorff, Domenick Lombardozzi, Branka Katic, Lili Taylor, Billy Crudup, Channing Tatum, and Leelee Sobieski.

Star Trek (PG-13) The funniest sci-fi blockbuster in recent memory, this relaunch of the fabled franchise tells the backstory of Kirk (Chris Pine) and Spock (Zachary Quinto) as they make their way through Starfleet Academy and earn their stripes fighting a rogue Romulan warrior (Eric Bana). The antic, high-energy Pine and the deadpan Quinto make an effective hot-and-cold comedy team, and the supporting cast contributes mightily to the laughs, especially Simon Pegg as Scotty. The film includes tons of in-jokes for the fanbase, but non-fans will find plenty to enjoy as well, not least the extended action sequence when Kirk and Sulu (John Cho) parachute onto a Romulan drilling platform and tangle with the guards. For a big-ticket event movie, this film’s lightness is refreshing. Also with Zoë Saldana, Karl Urban, Anton Yelchin, Bruce Greenwood, Clifton Collins Jr., Ben Cross, Chris Hemsworth, Jennifer Morrison, Rachel Nichols, Tyler Perry, Winona Ryder, and Leonard Nimoy.

Transformers: Revenge of the Fallen (PG-13) Michael Bay directs this sequel like a 15-year-old boy fumbling with a bra strap. The film actually doesn’t start out too badly, with Shia LaBeouf holding the center of a mysterious plot that revolves around more evil robots arriving on Earth. After one good action sequence early on, however, the plot stops dead, and the sequences become more incoherent. It’s a watchable summer blockbuster, but it could have been so much better. Also with Megan Fox, Josh Duhamel, Tyrese Gibson, John Turturro, Kevin Dunn, Julie White, Spencer Garrett, and Rainn Wilson. Voices by Peter Cullen, Hugo Weaving, Frank Welker, Charles Adler, Tony Todd, Grey DeLisle, and Michael York.

Up (PG) The latest Pixar animated film features an absurd yet somehow logical plot about a 78-year-old retired balloon vendor (voiced by Ed Asner) who attaches enough balloons to his house to sail away to South America, accompanied by an 8-year-old kid (voiced by Jordan Nagai) who’s marooned on his porch. The best part of the film is a deeply moving wordless montage early on, depicting the early married life of its elderly hero. The rest of the movie is a Pixar adventure that’s more lightweight than usual, though no less enjoyable for that. The warmth and simplicity at the heart of this fable are enough to win you over. The film doesn’t even need 3-D to work. Additional voices by Christopher Plummer, Bob Peterson, Delroy Lindo, Jerome Ranft, and John Ratzenberger. 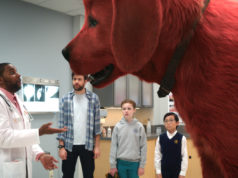