This is why I love my job: Every so often I get to see things that I’ve never seen before. With special-effects technology becoming cheaper and easier to use, filmmakers from outside Hollywood have learned how to play with this shiny toy, and as a result credible science-fiction movies have come to us from places such as Russia (Night Watch), Mexico (Sleep Dealer), and South Korea (The Host). Surely it’s no surprise that South Africa would join the fray, since it boasts some creative cinematic minds working in the best-funded and -organized film industry on the African continent. That nation has now produced District 9, and though it might not be the best science-fiction movie of the summer, in many ways it’s the most remarkable one.

The story takes place some 20 years after a spaceship containing more than one million starving and leaderless aliens became stranded in the sky above the city of Johannesburg. (The news anchors who serve as narrators quickly note that the scenario is like a Hollywood movie’s, except set in South Africa instead of a major American city.) In the present day, the aliens – who resemble 7-foot-tall upright-walking insect-like creatures – have been segregated into a slum in Jo’burg called District 9. Discrimination against the aliens has led to escalating tension and rioting between them and the humans, so the South African government announces the forcible relocation of the aliens (derogatorily called “prawns” by the humans) to a newly built township 200 miles outside the city that promises even worse living conditions. 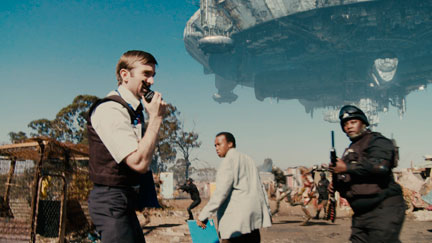 The movie begins on the first day of this plan being put into action, a process spearheaded by Wikus van de Merwe (Sharlto Copley), a youngish, cheerfully condescending, hopelessly overmatched bureaucrat who ventures into District 9 accompanied by a phalanx of armed soldiers, holding a stack of eviction notices for the aliens to sign. Stumbling upon a makeshift chemistry lab in one shack, Wikus gets sprayed with some black fluid from a canister. Soon his body is undergoing a transformation similar to the one in David Cronenberg’s The Fly, and he becomes a fugitive, hunted down by both thuggish government mercenaries and a group of Nigerian gangsters who want to eat him for animistic religious purposes. With no one else to turn to, Wikus seeks out the owner of the shack, one Christopher Johnson – the creatures all have had human names imposed on thems – who knows how to reverse the effects of the fluid but also plans to use it to shift the balance of power between the humans and the aliens.

This is an apartheid allegory, as you might guess, and it’s not a terribly subtle one. Yet the themes here help give the film its unique national flavor. This movie could not have been made in any other country. At the same time, the way it addresses issues of integration and minority rights through the prism of science fiction separates District 9 from the earnestly realistic apartheid dramas that have come out of South Africa before.

If that doesn’t do anything for you, there’s plenty of other stuff to watch. Director/co-writer Neill Blomkamp (remember that name – Hollywood is usually quick to snap up talent like his) deftly switches between cinematic techniques to tell this story. Faked newsreel footage and talking-heads interviews help set up the movie’s complicated backstory, but the faux documentary approach gives way to more straightforward dramatic treatment when Wikus is alone in District 9.

On a purely mechanical level, the movie is a prodigious achievement. The flesh-and-blood actors are smoothly integrated with the computer-generated alien characters, and the changes in Wikus’ body are handled in convincing (and graphic) detail. The alien weaponry is imaginatively rendered — check out what happens when an empty, inactive suit of armor suddenly comes online in the Nigerians’ hideout. Blomkamp executes shootouts, explosions, and car wrecks so efficiently and effortlessly that you’ll have to remind yourself that the film is a Third World production. How much more difficult it must have been for the makers of this movie than, say, the makers of G.I. Joe to manage set pieces like these.

Despite Copley’s best efforts at playing a desk jockey who’s driven to desperation and the detail at the very end (a nice touch), the movie never reaches a pitch of piercing tragedy or beauty. Yet it still accomplishes a great deal, and even more astonishing than its accomplishments is what it portends. This movie lays open possibilities that you didn’t even know existed, the whole concept of African science fiction being only one of them. Not only does it announce South Africa as a legitimate player in world cinema, it also gives us hope that creative minds in other obscure corners of the globe could one day tell a story on this scale and bring it to our multiplexes. Watching District 9, you can see the future of science fiction, of filmmaking itself, and it looks wide open.

No Time to Die: His Last Mission

Titane: I Am Titanium