I try to take movies on their own terms. That’s not the easiest thing to do when it comes to Quentin Tarantino. If you go to his World War II epic Inglourious Basterds thinking it’ll be a landscape-altering cinematic monument like Pulp Fiction, you’ll be disappointed. The movie’s deliberate pace will be too slow if you’re craving the slam-bang action of the Kill Bill movies, and if you’re looking for a tidy little caper flick (which, let’s face it, is probably what this movie should have been), you’ll be stymied by its 153-minute length. However, none of those things is what Inglourious Basterds is trying to be. It’s a historical fantasia with some darkly unhinged comic interludes, and despite some problems, it still worked quite well for me. 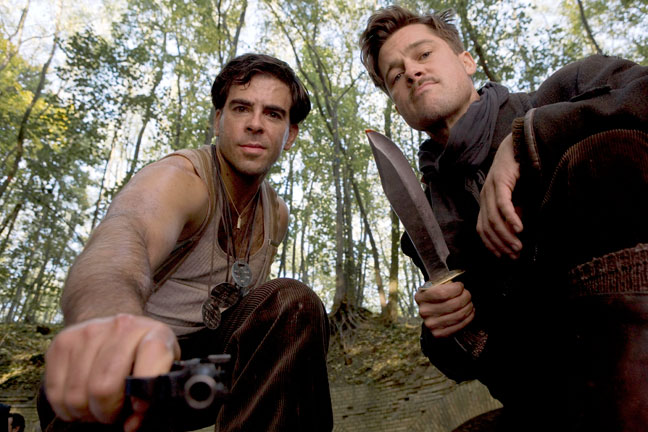 The title, borrowed from an Italian-made 1978 exploitation movie, refers to a unit of Jewish soldiers – Americans and a few Nazi-hating Germans – led by a swaggering Tennessee hillbilly, Lt. Aldo Raine (Brad Pitt, chewing on his accent with tremendous gusto). The Basterds operate in Nazi territory, raining down wholesale slaughter upon their enemies and spreading fear by scalping the enemy dead, a practice ordered by the part-Native American Raine. In June 1944, German movie star Bridget von Hammersmark (Diane Kruger), a spy for British intelligence, meets up with the Basterds and hands them a lollipop of a mission. A glitzy premiere of a new Nazi propaganda film in occupied Paris will be attended by the Third Reich’s top officials, including Hitler himself (Martin Wuttke). What a great chance to take them all out in one stroke!

The best reason to see this movie is Christoph Waltz, who portrays SS Col. Hans Landa, a.k.a. “The Jew Hunter,” a character who belongs in the pantheon of great Tarantino villains. The movie’s masterful, slow-rolling opening scene shows Landa in the French countryside visiting a dairy farmer (Denis Menochet) who’s suspected of hiding his Jewish neighbors. Unfailingly polite, Landa winds an insinuating web of words around the man, punctuating the tension by producing an absurdly large meerschaum pipe and asking permission to smoke it. Even with that, Landa takes less than 10 minutes to reduce the laconic, flinty farmer to a tearful wreck, and he does it without either raising his voice or dropping his genial, courteous demeanor. This fantastic set piece evokes the familiar Tarantino feeling of queasy dread.

Landa’s malignancy is only enhanced by his delicacy, tact, and buoyant sense of humor, qualities that surface on the frequent occasions when he catches people in a lie and toys with them. He kills a traitor with his bare hands, but he’s more frightening in mundane moments like when he’s musing in French over the quality of a Parisian restaurant’s strudel. Meticulous yet gleeful, Landa stops in the middle of a triumphant moment to ask the imprisoned Raine whether he’s correctly using the word “bingo.” If you think murderous Nazi characters are played out, watch the Austrian-born Waltz (who’s done most of his work in supporting roles on German TV) effortlessly shift between blandness and menace while negotiating four languages, making Tarantino’s discursive dialogue sound as lilting and baleful as a Mahler symphony.

The character deserves his screen time, as does a lengthy scene in the middle when Bridget’s repeatedly interrupted rendezvous in a rathskeller with British intel explodes into violence. Elsewhere, the film has some fat on it that could have been lost. Members of the Basterds such as the icy German turncoat (Til Schweiger) and the berserk baseball bat-wielding Bostonian nicknamed “The Bear Jew” (played by slasher filmmaker Eli Roth) are given ominous introductions and then not given enough to do to live up to them. The romantic subplot between a Nazi war hero (Daniel Brühl) and a secretly Jewish French movie theater owner (Mélanie Laurent, looking much like the young Catherine Deneuve) doesn’t pull its weight, either. Tarantino’s cinephilia definitively overpowers his storytelling instincts in these characters’ involved conversations about G.W. Pabst and Leni Riefenstahl.

There was a time when audiences flocked to World War II movies like The Guns of Navarone to have fun watching the Nazis go down to defeat. Tarantino is trying to restore that, but he’s trying to critique it, too. Living up to their name, the Basterds often behave as despicably as their enemies, and our pleasure in the Nazis’ deaths is unpleasantly mirrored in the climactic scene at the movie premiere when Hitler and his fellow Germans cheer the onscreen deaths of American soldiers. This is a potentially fruitful idea that Tarantino fails to sustain throughout the movie. He’d rather generate thrills, including a climax that’s both a fiery coup de théâtre and a gigantic middle finger to historical accuracy. Naturally, I loved the sheer chutzpah of it.

All told, this jumbo-sized movie has a better, smaller movie inside it trying to get out. Tarantino should probably make that smaller film next time. However, he does succeed in scraping off the thick coating of solemnity that has settled on World War II movies since before Steven Spielberg got there. Irresponsible and overinflated though it is, Inglourious Basterds is still more pleasurable than half a dozen Defiances and Valkyries and Miracle at St. Annas put together.