This list of 10 great shows doesn’t pretend to be anything like a comprehensive critical overview of Fort Worth theater in the ’00s. I’ve missed too much — and likely forgotten too much — to attempt that. Rather, these 10 exemplary productions, in order of appearance, featured performances, scenes, moods, and moments that still hang around in my head months and years later. 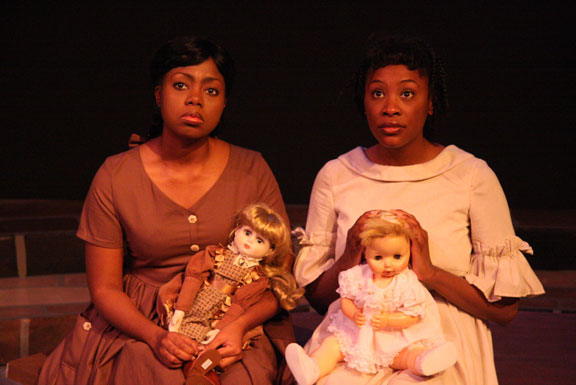 Kafka: A Hunger Artist, Hip Pocket Theatre (2002): Movement artist Jeffrey Farrell starred as Franz Kafka and narrated that gloomy writer’s famous story about a circus performer (Michael Goggans) who starves himself for the entertainment of ticketbuyers. I remember cool October winds, a bonfire, Goggans’ tragic frame, and Farrell transforming himself into a panther escaping from a cage. Absolutely magical.

Lobby Hero, Stage West (2003): Justin Flowers hit his first major Stage West role out of the ballpark as a slacker philosopher/security guard embroiled in adultery and murder. His long digressions about baseball and hot chicks in uniform were priceless. Kenneth Lonergan’s script examined the uses and abuses of the little white lie with great insight.

God’s Man in Texas, Circle Theatre (2004): A legendary 81-year-old pastor (Hugh Feagin) struggles to hand the pulpit down to a younger, more progressive preacher (Bill Jenkins) at a Baptist mega-church. David Rambo’s play explored why some believers require a roar to hear God’s message while others are content with a whisper. This show was that rarest of rarities, an intelligent comedy that takes faith seriously.

The Shape of Things, Stage West (2004): If you’ve ever doubted that romance is the art of manipulation, playwright Neil LaBute reassured you with this acidic comedy about a college student (Dana Schultes) who sets about to alter the body and mind of her boyfriend (Lee Trull) for the sheer aesthetic challenge of it. Schultes’ final dissertation on her “project” was the chilling pinnacle of LaButian nihilism.

Hedwig and the Angry Inch, The Other Half Theatre Experience (2005): I’m not sure what happened to The Other Half or this show’s lead performer, Robert Rain, but their ferociously spontaneous production with a live band exemplified just how great the Ridglea, where the show took place, can be as a theater venue. Rain sparred ingeniously with the audience while narrating the fairy tale saga of John Cameron Mitchell’s East German transgender rocker in consummate euro-trash style.

Blues For an Alabama Sky, Jubilee Theatre (2006): This production of Pearl Cleage’s drama about lost souls navigating the disintegration of the Harlem Renaissance in 1930 generated universal themes of loss and change. The decaying set resembled an apocalyptic landscape as The Great Depression came to claim Harlem’s residents. Eleanor T. Threatt was marvelous as the luckless club singer who doesn’t know how to live without a man.

The Underpants, Theatre Arlington (2006): Both Sigmund Freud and Benny Hill would’ve appreciated this boisterous production of Steve Martin’s toweringly ridiculous play about a woman who brings shame on her village when she accidentally exposes her underpants to the king. The show turned into a hallucinatory parade of phallic and mammarian props and double entendres. Dirty-minded and sweetly innocent.

According to Goldman, Circle Theatre (2007): Bruce Graham’s caustic Hollywood cautionary tale concerned a has-been screenwriter (Trey Walpole) who attempts to use the life story of a painfully shy screenwriting student (Josh Heard) to re-enter The Biz. In brilliant performances, Walpole and Heard locked horns as their collaboration took funny and decidedly dark turns to reflect each writer’s agenda. The songs of Fred Astaire have never sounded so eerie.

dark play or stories for boys, Amphibian Productions (2008): Using intermittent barrages of sound and light effects, the Phibs recreated playwright Carlos Murillo’s vision of the internet as a menacing binary jungle where a canny teenage predator (Jason Cruz) can lure lovelorn teenage prey (Josh Heard) into a homicidal romance of Shakespearean complexity. Both cerebral and visceral, this production proved theater is still relevant — especially when the scripts are.

The Bluest Eye, Jubilee Theatre (2009): Director Ed Smith’s bleak and beautiful production, based on an adaptation of Toni Morrison’s Faulknerian first novel, seemed to take place inside the time-shifting, fantasy-haunted mind of Pecola (Shundra Grubb), a pregnant teenager abused by her family in 1940s Ohio. The stellar female cast members in this show played characters who were dogged by unrealistic (that is, Anglo) standards of beauty, so Pecola’s final descent into a private madness at least felt like a refuge.