In December 2008, State Rep. Lon Burnam had a one-car accident. The Fort Worth Democrat didn’t even get a ticket. Nonetheless, Burnam is convinced that the accident report was passed from local police to who knows what local, state, and federal agencies, via the Collin County North Central Texas Fusion System. 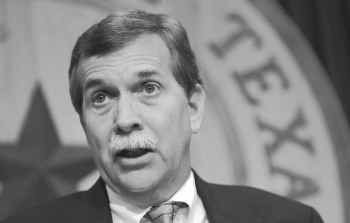 You may have thought fusion these days had mostly to do with cross-cultural cuisine, but in this case the Collin County fusion system is a “remotely accessed data-sharing and analysis system” that involves more than 170 agencies in 16 counties, including Tarrant and Dallas. It’s meant to provide policing agencies, the FBI, Homeland Security, first responders, and health providers with a wealth of information at the touch of a computer keyboard.

According to advocates, such information-sharing systems allow police to do a better job of tracking and apprehending dangerous criminals by giving them information covering a broad area rather than just their own backyard.

But critics aren’t sure that putting that much information — including some that has nothing to do with criminal activity — into the hands of law enforcement is really a good thing. They fear it will lead to racial profiling, the targeting of perfectly legal groups, and even harassment of individuals. One major concern is that information from various sources will be sent up the line to federal agencies, which will use it to target undocumented residents for deportation — and that the result will be a wedge driven between Latino communities and local police.

“When that happens, people often won’t even report criminal activity or come forward as witnesses to criminal activity,” said Aerin Toussaint, a policy analyst with Texas Impact, a grassroots network that includes Christian, Jewish, and Muslim individuals and institutions. The group works for public policies that enhance freedom and justice.

“I am tremendously concerned about the potential violation of privacy” with fusion systems, Burnam told Fort Worth Weekly. “I have been trying through the Open Records Act to discover what they have gathered on me. I know they gathered something in the context of my having been the director of the Dallas Peace Center for 10 years. And I want to know what it is.”

Fusion centers were started in 2004 as part of the post-9/11 anti-terrorist backlash. They are funded primarily by the U.S. Department of Homeland Security, which developed the idea of creating multi-jurisdictional agencies that would share information in order to track and prevent terrorist and criminal activity. However, the federal government offered no strict guidelines on how the centers would be run, leaving that up to the local jurisdictions.

The first such center in Texas was opened in 2004 by the Department of Public Safety’s Intelligence and Counterterrorism Division. Since then several others have been created, including the one in Collin County that covers North Texas. All the participating agencies supply data to that “bank.” Dallas, which has its own center, provides only limited information to the Collin County center.

The result thus far has been the creation of overlapping data centers with different missions, each run independently — and some taking the kind of actions that civil libertarians have feared all along.

The Collin County fusion center, for instance, sent out a “prevention awareness bulletin” in February 2009, ordering law enforcement authorities to report on all civil rights meetings involving Muslims and to gather and pass along information on any anti-war groups in the 16-county jurisdiction. The ability to “order” local jurisdictions to supply information comes from the center’s federal mandate.

It turned out that the bulletin was not authorized by the Collin County head of Homeland Security, but was sent out by a computer worker in the center. In the months that followed, everyone from the ACLU to religious groups objected to it. In the wake of the scandal, center officials center limited the scope of their data collecting  — but many of the agencies in its jurisdiction continued to pass along the information demanded.

“This memo is not a plea for legitimate intelligence, and seems to endorse discrimination against Muslims,” Caroline Fredrickson, director of the ACLU’s Washington Legislative Office, said in a press release. “The idea that the tolerance advocated by the groups being targeted would be treated as a menace to American security demonstrates a disregard for civil liberties and a disdain for democracy itself.”

The Collin County fusion system hasn’t released another such bulletin since then.

According to Lt. Todd Thomasson of the Dallas Police Department, commander of that city’s fusion center, other centers have “passed out documents that suggest that if a person has a certain bumper sticker they might be a terrorist and other misleading things.” But he said the Dallas City Fusion Center — officially called Metro Operations Support and Analytical Intelligence Center, or MOSAIC — does not participate in that sort of grab-bag information gathering.

Thomasson said that while his staff has the ability to gather data from the NCTFS, neither the Collin County center nor any other agency can look into the Dallas center’s computers. “Other agencies can call us for information, but there would have to be a criminal predicate before we would release information,” he said.

Asked whether he had run into any issues with the Dallas Hispanic community, so easily targeted because of the number of undocumented aliens, he said, “We view that as strictly a federal issue.”

The Fort Worth Police Department did not respond by deadline to questions about what information they pass along to the Collin County center.

Hector Carrillo, civil rights chair of the Fort Worth LULAC chapter, said, “We have not seen any upheaval with regard to the Fort Worth Latin community from the Collin County fusion program. Yet.”

“The reason that one fusion center might target a specific race or group of people and another won’t is that different fusion centers have different missions,” said Bill Baumbach, a printing company manager and reporter who writes for D Magazine’s FrontBurner blog and runs his own blog, the Collin County Observer. “They all have the same basic concept, which is to take information from different databases to make them relational. But what data they choose to collect and what data they send on to the FBI and Homeland Security is where they differ. The Department of Public Safety’s Texas Fusion System in Austin is one of the most frightening.”

The Texas Fusion Center shares information with the Texas prison system, Homeland Security, federal treasury and immigration agencies, the Air and Army National Guard, and a host of other police and non-police agencies.

Baumbach said the DPS center also collects personal information every time a police officer talks with someone, including drivers who are pulled over and issued nothing beyond a warning. “That is gathering information on people who were not only not convicted of a crime — they weren’t even charged with one. That’s very frightening to me,” he said.

“Think of what can go into those databases. The Collin County Sheriff’s Department has bought handheld license plate scanners, and they walk around certain parking lots recording those plates. And that information is fed into the fusion center. The question is, should the government collect that information — where your car was at 3 p.m. yesterday, for instance? I don’t think so. But these fusion databases have escaped scrutiny because they wave the flag of national security.”

Because there is so little federal oversight, he said, “They’re all mavericks. You can have a good one in Dallas but one that overreaches in Collin County and affects millions of people.”

Many groups have been calling for oversight and transparency regarding the centers, almost since they began operating in 2004. In a 2009 press release, the ACLU noted that it had predicted that the “complete lack of oversight over [fusion centers’] activity would lead to violations” of civil rights.

Bee Moorhead, executive director of Texas Impact, said transparency is a key concern. “The state legislature needs to see that there are ground rules in place, and they need to include … a way for the public to know what is going on, what intelligence is being gathered, and why.”

Burnam said the fusion centers “are a direct result of 9/11 and all of the phobias that have ensued since that day. People think that if they sacrifice enough of their own liberty they will be safe, but that just isn’t the case. There is a huge potential for abuse of people’s right to privacy in this dragnet approach to gathering data.”

Homeland Security has noted the potential for abuse, Thomasson said. “Every fusion center is going to have to have a privacy policy — vetted by the DHS — in place by sometime in 2011 in order to receive federal funding. And those privacy policies are meant to protect civil rights.”

The privacy policy for the Dallas center has already been accepted by the DHS, Thomasson said. But he said the federal government still plans no direct oversight of the centers. “Each center will continue to be run individually,” he said.

Peter Gorman can be reached at peterg9@yahoo.com.