Plush and inoffensive, Red is based on a relatively obscure graphic novel by Warren Ellis and Cully Hamner, but it bears very little resemblance to its source. Ellis’ bare-bones narrative and Hamner’s hard-edged illustration style have been replaced by greater emphasis on humor, delicacy, and character detail. The resulting comic thriller is fluid and conventional enough that you’d never guess it was adapted from a graphic novel. Its target audience probably won’t care about that. Then again, this movie’s pleasing enough that even moviegoers 50 years younger than the target audience won’t care, either. 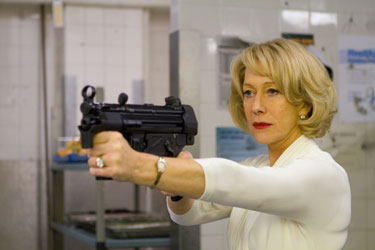 Bruce Willis portrays Frank Moses, a legendary former CIA black-ops guy trying and mostly failing to adjust to retirement in Parma Heights, Ohio. The highlight of his day is his phone conversations with Sarah Ross (Mary-Louise Parker), a cubicle drone in the Kansas City government office that sends Frank his pension checks. Frank’s smitten enough to invent reasons to call her and flirt with her while never telling her what he used to do. Even so, he correctly figures that he’s placed her in danger anyway after a CIA hit squad shoots up his house. As soon as he disposes of the would-be assassins, he heads to KC, snatches Sarah just before another death squad gets to her place, and flees with her to the far corners of the country. They and a hastily assembled band of fellow retirees-turned-targets have to figure out why The Company is trying to put them in the ground, all the while eluding a younger agent named Cooper (Karl Urban) who’s doggedly pursuing them.

German director Robert Schwentke is tasked with presenting this all as an airy confection, and he succeeds to an amazing degree when you consider that his previous work includes the joyless 2003 thriller Flightplan and the slumber-inducing 2008 adaptation of The Time Traveler’s Wife. He does particularly well with the early scenes that capture the drip-drip-drip boredom of Frank’s retired life and skims lightly from action sequences to comic banter and back. Cinematographer Florian Ballhaus adds to the proceedings by coating everything in a thick layer of gloss.

What Schwentke can’t do is paper over all the issues in the script by Jon and Erich Hoeber. The hijinks depend on shocking ineptitude by the CIA, FBI, Secret Service, and airport security in Mobile, Ala. (Not to mention the press — the kidnapping of a sitting U.S. vice president goes completely unreported in this movie. No wonder our heroes reject the idea of going public with what they know.) The time frame of this story is all messed up, and characters cover impossible amounts of distance in short spaces of time. This is a movie where the hero casually steps out of a car that’s spinning out of control and opens fire on the bad guys without being hit by the tail end of the car. Schwentke needed to film this in a crazier, more cartoonlike style to get away with that, and he doesn’t have the necessary imagination.

The movie owes its modicum of success to the comedy that the filmmakers find in these badasses who’ve been put out to pasture. Frank’s former Soviet nemesis (Brian Cox, pilfering scenes as an unexpectedly warmhearted ex-hit man) sighs wistfully into his vodka about his murdering days while a grandmotherly Brit (Helen Mirren) cops to remaining a semi-active contract killer, saying “I can’t stop” as nonchalantly as if she were admitting to sneaking candy. The supporting cast has some over-the-top moments (Parker and John Malkovich as a paranoid recluse are the worst offenders), while Willis underplays too much — we don’t feel the tug of a cautious operative who’s taking unusual risks because he’s in love. Nevertheless, they more often than not find the right groove as a band of happy warriors.

The movie’s full of incidental pleasures, too, like the casting of Rebecca Pidgeon as a bitchy CIA higher-up and Ernest Borgnine as a crusty file clerk who turns into a starstruck fanboy in Frank’s presence. In contrast with the similar Knight and Day, Sarah isn’t made completely useless in a crisis, as demonstrated by a scene in an elevator — faced with three soldiers pointing automatic weapons at her, she defuses the situation with two sentences. Mirren gets to spray submachine gun fire at a security detail, and even though she’s not known for acting in action thrillers, you’re not surprised to see that she looks badass. For all the veterans here (the 46-year-old Parker looks like a schoolgirl next to her castmates), the movie tells its story about aged action heroes without resorting to the “we’ve still got it” bluster of The Expendables. None of this makes Red into a superlative comedic spy thriller, but it’s still agreeable enough to spend a couple of hours on.