It’s mesmerizing to watch Aaron Johnson in Nowhere Boy. The extraordinarily pretty 20-year-old has been performing on screen since his childhood, but the native of High Wycombe, England, didn’t gain wide exposure until he played the nerdy American high-school hero of Kick-Ass. He gives a completely different performance in Nowhere Boy as the teenage John Lennon, a Liverpool lad who dreams of being the next Elvis. 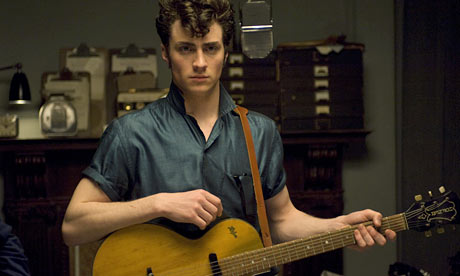 First of all, Johnson gets the distinctive Liverpool drawl down, which is a tough thing to do even for British actors, if they’re not from the area. He also handles the singing and guitar-playing quite well, as young John plays in a series of bands predating The Beatles. The truly astonishing part of Johnson’s work is the easy way he embodies Lennon’s salient qualities: the cocksure way with girls, the offhand wit and casual cruelty, the rebellious streak in a character who’s nevertheless deeply rooted in the manners and mores of his industrial-bourgeois neighborhood. Beatlemaniacs may wish that this movie portrayed more of Lennon the budding musical genius, but the thing is, this boy that we see doesn’t need to be a musical genius to be interesting.

The acting is easily the best thing about this biopic, which is based on a memoir by Lennon’s half-sister, Julia Baird. We first see 17-year-old John being raised by his mother’s flinty sister Miriam (Kristin Scott Thomas), whom the kid calls Aunt Mimi. After Mimi’s husband and John’s beloved uncle (David Threlfall) suddenly dies, John catches a fleeting glimpse of Julia Lennon (Anne-Marie Duff) at the funeral. Shortly he discovers that his mother has been living near his house in Liverpool for his entire life, and having never truly known her, he can’t help but be curious about her.

Duff gives the other great performance in this movie, setting the screen ablaze as a 40-year-old wife and mother who’s still an oversexed teenager at heart. John’s initially ensorcelled by this wild, funny, creative, energetic woman who shares his talent for music and teaches him the banjo. In time, though, he comes to see why she’s not the best parenting material — she hangs out in clubs and seduces strange men while her husband (David Morrissey) stays home and takes care of their daughters. Duff finds the undercurrent of sadness in this character who realizes that living this way isn’t best for her kids but doesn’t know how else to be.

First-time filmmaker Sam Taylor-Wood does a fair job of copying the kitchen-sink realism of British films from the period. (Offscreen drama: Taylor-Wood and Johnson are now a couple with a baby. The director is twice the star’s age.) Unfortunately, Matt Greenhalgh’s script leads to a soap opera-style climax in which John’s aunt and mother reveal to him why Julia gave him up, and no one involved can keep the melodramatics from boiling over. This is even before the weepiness that ensues soon afterward when Julia is killed in an accident. That development gives us a potent scene at the end between John and new bandmate Paul McCartney (Thomas Brodie Sangster), a baby-faced kid who recently lost his own mother, but its effect is dampened by the tenor of everything that’s come before. Nowhere Boy falls short of being an essential piece of Beatles lore, but even moviegoers who care nothing about the Fab Four will take to these actors. l