The Coen brothers have become rather full of their own philosophy lately, using a series of otherwise widely divergent movies (No Country for Old Men, Burn After Reading, A Serious Man) to proclaim that we live in a cold, hostile, godless universe ruled by chance. It’s a relief to see them take up True Grit, a Western in which they don’t have to bother with delineating their world view. They just get on with the story.

That perfectly suits them to this material. True Grit is best known as the 1969 film starring John Wayne, who won an Oscar for it largely because his role acknowledged that he was getting old. The Coens maintain that their version isn’t a remake but rather another film version of Charles Portis’ novel on which the first movie was based. (Whatever.) Where Henry Hathaway’s direction in the original film was plodding and soggy, the Coens — ruthless craftsmen who despise sentimentality in all its forms — turn the novel into a sinuous, potent exercise in storytelling. 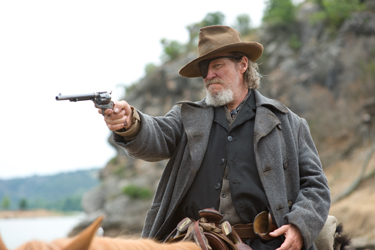 For those who don’t know the previous versions, Mattie Ross (Hailee Steinfeld) is a 14-year-old girl growing up in Arkansas in the 1870s, when her father is murdered by an itinerant ranch hand calling himself Chaney (Josh Brolin). The killer escapes the local law by fleeing into the Choctaw Indian territory, today known as Oklahoma. Determined to see Chaney either hanged lawfully or killed during arrest, she offers a hefty cash reward to the toughest, meanest U.S. marshal she can find to help her chase the killer down. That is Reuben “Rooster” Cogburn (Jeff Bridges), a one-eyed, hard-drinking gunslinger who gives outlaws no quarter but is none too thrilled at Mattie’s stipulation that she go with him on his manhunt, which leads him into the path of the outlaw Lucky Ned Pepper (Barry Pepper, appropriately enough).

Portis’ novel is extraordinarily well-written pulp, filled with grotesque comic relief and florid dialogue that’s markedly at odds with the story’s bloody violence and unlettered characters. Many of the lines here are straight from the book (“I’ve lapped water from a filthy hoofprint and been glad to have it”), while others are additions by the Coens that fit right in. (“He has abandoned me to a congress of louts.”) Much of the comedy springs from the interplay among the three markedly dissimilar characters pursuing the killer: the proper, businesslike Mattie; the rough-as-boot-leather Rooster; and a preening, self-satisfied Texas Ranger named LaBoeuf (Matt Damon) who joins their hunt for Chaney and manages to rub both of them the wrong way. The violence and comedy flow into each other naturally, as in a scene when Mattie climbs more than 20 feet up a tree to cut down a hanged man while Rooster prattles on about his ex-wives.

Of course, it helps immensely that each of these three principals outperforms their counterparts from the 1969 film — Damon, in particular, is a massive upgrade over Glen Campbell. Bridges makes Cogburn much less lovable than John Wayne did, delivering all his lines like he’s chewing on tree bark and emphasizing the character’s brutal streak. Yet he doesn’t lose sight of the character’s funny side; Rooster’s a surprisingly talkative raconteur when he’s trying to while away the time on the trail. As for Steinfeld, whether it’s natural confidence or just the blissful ignorance of youth, she has no trouble holding the screen with her famous male co-stars. Mattie is the wild card in this story, a girl so fearsomely practical that she reacts to the sight of her father in his coffin by haggling over the funeral expenses. Steinfeld, a newcomer making her feature film debut after acting only in short films and TV episodes, makes the character’s starchy insistence on having things just so an essential part of her toughness.

The film has a couple of interludes designed to show us that Mattie is still just a girl underneath her freakishly mature exterior (the scene involving the Midnight Caller comes to mind), but they feel forced — childlike innocence isn’t a quality that the Coens do well. Still, the filmmakers’ improvements are everywhere in evidence, small though they tend to be. The barren winter backdrop seems much more appropriate to the story than the original film’s verdant summer setting, and Mattie and Rooster’s snowy encounter with a half-crazed medicine man wearing a bearskin (Ed Corbin) is an entirely new addition that chimes well with the general tone. This new True Grit may not be much more than a genre exercise, but it’s a pure and honest one that any filmmaker could be proud of.