Sheesh, given how lukewarm audiences have been to the popcorn movies that Hollywood has been putting out lately, you’d think the studios would have rushed some Oscar-contending prestige pictures into the theaters this week to fill the void. Nope, all we’re getting are two flicks that didn’t screen in time for our deadlines, if at all. I was going to put this list of 2010’s great acting performances on the web, but what the heck. You can log onto Blotch at www.fwweekly.com for my list of stellar supporting turns, but let’s use this space to recap the best performances by lead actors of this past year:

Jesse Eisenberg In The Social Network, Mark Zuckerberg is a creature uniquely equipped for our multitasking time: His attention is everywhere at once without ever losing microscopic focus. Eisenberg communicates this through subtle shifts in his eyes and tiny half expressions. His performance may be minimalist, but he also finds the outsize dimensions to Mark’s personality — his need to prove himself smarter than everybody else and his arrogant contempt for everyone who can’t appreciate his visionary genius. Listen to him repeat part of a lawyer’s question (“The affirmative?”) and hear the sarcasm dripping off those two words and sizzling on the conference room table. 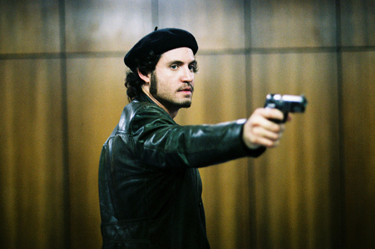 Colin Firth Who cares if he doesn’t look like the real-life King George VI? In The King’s Speech, Firth nails the king’s shame and frustration at the intractability of his speech impediment. That’s relatively easy to spot, but Firth locates the winning, self-deprecating sense of humor at work in this man as well, and it’s impossible not to feel for him when the pressure of the monarchy makes him break down in private with his wife. (“I’m a naval officer! It’s all I know. I’m not a king.”) The film would be a poor shadow of itself without the struggle that plays itself out on Firth’s face, voice, and body as the king steels a nation’s resolve with his words.

James Franco This isn’t for 127 Hours. It’s for his work in Howl, which is drawing much less Oscar buzz because it isn’t as good a movie. Didactic and preachy though the film is, Franco’s detailed evocation of a thoughtfully rebellious gay New York Jewish beatnik poet Allen Ginsberg cuts through it all. His readings of the poem aren’t just invigorating in themselves. They draw a portrait of a bookish man being carried away by the thrill of performance and by the freeing of the long-repressed truths in his words. If anybody could make poetry sexy, surely it’s Franco.

Ryan Gosling and Michelle Williams It’s impossible to separate their performances in Blue Valentine from each other or their work from the film’s depiction of a married couple coming together and breaking apart. Gosling shows us a charming, good-hearted kid whose lack of ambition turns him into a directionless schlub, while Williams gives us a winsome girl whose frustrated career hopes eat away at her. By the time their tearful breakup comes, you know enough about these people to appreciate how horrible their marriage’s end is for them. They are beautiful and devastating.

Jeon Do-yeon She won an acting prize at the 2007 Cannes Film Festival for her performance in Secret Sunshine, but only now are American audiences (in a few select cities at the moment) able to see this extraordinary piece of work. Her character is put through an almighty wringer and responds by plunging into suicidal despair and scary Christian fundamentalism. In the wrong actor’s hands, this mother’s pain would turn monotonous and unrelenting, but Jeon makes every step of this character’s spiritual journey credible. You won’t forget the scene in the film’s middle, when her screams of bottomless grief rip through the serenity of a church service.

Kim Hye-ja Looks like Korean mothers ruled the roost in 2010. The nameless woman in Mother is a study in maternal devotion that shades over into murderous psychopathy. What makes this nameless character so haunting is that she knows full well that her love for her retarded son is drawing her over to the dark side. For all that, she’s helpless to reverse course, her only hope being, oddly enough, her dubious skills as an unlicensed acupuncturist. Kim makes this woman’s plight into something you can’t take your eyes off.

Jennifer Lawrence She now faces the same problem as Gabourey Sidibe from Precious, having people think she really is the character that she played. That’s an issue for down the road, but for now let’s savor her work in Winter’s Bone. The movie might have collapsed into two-bit Southern Gothic horror if not for the core of humanity she brings to the story as a decent, sharp-witted girl who’s hardly naïve about the world yet isn’t fully mature until the physically and emotionally traumatizing quest for her father makes her so.

Lesley Manville There’s some dispute over whether her performance in Another Year is a lead or a supporting one. Whichever it is, she overwhelms everything else in Mike Leigh’s drama as Mary, a still-beautiful, absolutely hopeless middle-aged boozehound of a best friend to the married couple at the center of the movie. She conjures up a palpable sense of presence; watching the film, you feel like Mary’s sitting next to you, grabbing your arm, spilling her Scotch all over your clothes, and telling you how good her life is in a tone of voice that pleads with you to believe her.

Julianne Moore The performance of her co-star in The Kids Are All Right is attracting all the Oscar buzz, and while Annette Bening is very good indeed in that comedy, it seems to me that Moore did most of the heavy lifting. As a lesbian housewife who fails at everything she tries to do except raise her kids, Moore is sexy and funny — check her botched grand exit after kissing Mark Ruffalo’s restaurateur. The speech that she gives near the film’s end to her family, dry-eyed and devoid of self-pity, should be a model for cheating spouses trying to own up to their behavior.

Natalie Portman It’s impressive enough just learning to dance well enough to convince us that she’s a ballet star. Yet the way Portman hurls herself into the psychosis of Black Swan, hers would be a great performance even without the ballet sequences. Her character feels uncannily all of a piece even as she morphs from terrified little girl to determined professional to panicking killer to evil alter ego. During the climactic ballet, she skulks around backstage, trapped in the character of the Black Swan and smiling to herself as feathers sprout from her shoulders. It’s a magnificent and scary moment made plausible by Portman.

Édgar Ramírez The Venezuelan star does a tour de force in Carlos, the five-and-a-half-hour epic about the 1970s terrorist and would-be revolutionary Carlos the Jackal. Delivering dialogue in four languages, the handsome Ramírez evokes the glamour and charisma that won Carlos followers all over the world. Then, as Communism falls and global politics pass Carlos by, his body goes to seed and his beliefs calcify into unthinking dogma. Ramírez’ physical transformation from lean freedom fighter to fat has-been is remarkable, but so too is his portrayal of a misguided soul rotting away in obsolescence.

Ben Stiller You just want to throttle him in Greenberg. (Actually, the same is true in Little Fockers but for completely different reasons.) As a failed musician ranting at the world’s injustice from the cozy confines of his brother’s L.A. mansion, Stiller captures a character in the midst of a quick transition from demanding adolescent to bitter old man. He invests both Greenberg and Greenberg with pathos and fury. In the documentary Joan Rivers: A Piece of Work, the comedienne dismissed Stiller as “lucky.” I wonder if she’s seen this film.