Whither the prestige picture? I’m talking about straightforward, visually handsome, modestly budgeted films that feature a few high-powered actors tackling weighty issues, usually working from a script with a literary or theatrical pedigree. Recently this sort of drama seems to have fallen out of fashion. Audiences turn out in greater numbers for unchallenging escapism, while critics (me included) reserve spots on our year-end 10-best lists for innovative stuff that pushes boundaries.

Middlebrow dramas are too often overlooked even when they’re well done and showered with Oscar nominations; witness the underwhelming box-office performances of Revolutionary Road, Frost/Nixon and Doubt two years ago. Some people even dismiss this sort of cinema as “TV drama,” never mind that top-level TV shows are as compelling as the best films. That’s too bad, because prestige pictures can give viewers things that superhero franchises, gross-out comedies, and mind-bending thrillers don’t. There should be a place for them on the big screen. One could argue that there still is, now that both The King’s Speech and The Social Network have found sizable though not blockbuster-sized audiences. Whether this is a temporary spike or a sign of a coming resurgence in prestige pictures remains to be seen. 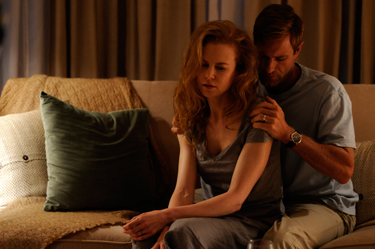 None of this diminishes the uphill challenge faced by the latest drama in this vein, Rabbit Hole, when it comes to drawing crowds. That’s because it’s about a married couple dealing with life approximately eight months after the death of their only child. Right there, that’s too heavy for lots of moviegoers. Such painful subject matter needs a great film to entice people into the theaters. I’m afraid that this movie isn’t great, only decent. It doesn’t demand to be seen, though it does deserve a look.

Becca and Howie (Nicole Kidman and Aaron Eckhart) are the bereaved couple, educated and well-to-do types living in a nice house in Queens, in front of which their four-year-old son chased their dog into the street and was hit by a car. Now everything they do is colored by that trauma. They go to a support group for similarly bereaved parents, where Becca is creeped out by the religious talk. She also finds little comfort from her mother (Dianne Wiest), who herself has lost a child under far different circumstances. Everyone around them is walking on eggshells. The parents themselves are on edge, with Howie wanting to have another baby while Becca pulls away from him.

The film is written by David Lindsay-Abaire, who adapted it from his own stage play. (The original Broadway production starred Cynthia Nixon and John Slattery.) It’s all scripted rather exquisitely: Becca’s abortive attempt to drop in on her former workplace at Sotheby’s, the interludes at the support group that lead Howie to smoke weed and hesitantly flirt with another bereaved mother (Sandra Oh), the scene in the basement when Becca asks her mother if the pain ever goes away. (The answer: “No. But at some point it becomes bearable.”) Director John Cameron Mitchell, scarcely recognizable as the same filmmaker who adapted the movie version of his rock musical Hedwig and the Angry Inch, does all this up with some skill — the film never feels stagey — and a great deal of taste.

I guess that’s the problem. Like the rest of the movie, the actors always seem to pull back from the brink. Eckhart is perfectly fine here; my issue with him is nothing more than the fact that he’s so much more vivid when he’s playing guys who are horrible and insensitive. Kidman has received an Oscar nomination for her work here. She’s been better elsewhere, too, most notably playing a similarly tightly wound bourgeois mom to nightmarish effect in Margot at the Wedding.

Neither the actors nor anything else ever ruffles the surface of this thing, except for one moment arising from Becca’s newfound friendship with the teen driver (Miles Teller) who was behind the wheel for her son’s fatal accident. She sees a comic book that he’s been creating in his spare time, a science-fiction story involving characters in parallel universes. His drawing is strange and beautiful, and it expresses the kid’s desire for a different reality in an enchanting and oblique way.

Even so, there are better movies on this difficult subject. The Korean film Secret Sunshine opened on the coasts a few weeks ago, and while we’re waiting for that to arrive here, there’s an excellent 2002 Italian drama called The Son’s Room that does everything this movie does, and does it better. Those films are powerful works of art. Rabbit Hole is intelligent, dexterous, and scrupulous, and in its attempt to find consolation and peace it winds up muting itself. It never quite takes the plunge.

Starring Nicole Kidman and Aaron Eckhart. Directed by John Cameron Mitchell. Written by David Lindsay-Abaire, based on his own play. Rated R.