The guys in the young but veteran punk rock trio Rocket for Ethiopia are happy to finally be playing longer sets. Now that each member is in his early 20s and has been in the band for about five years, guitarist Dustin Morris, bassist Pablo Arauz, and drummer Grant Baird have accumulated about six dozen songs, allowing the guys to perform for nearly half an hour, nearly twice the length of their early gigs. Morris, Arauz, and Baird also have managed to incorporate just about every aspect of punk rock history into their short, fast, and eclectic bursts. 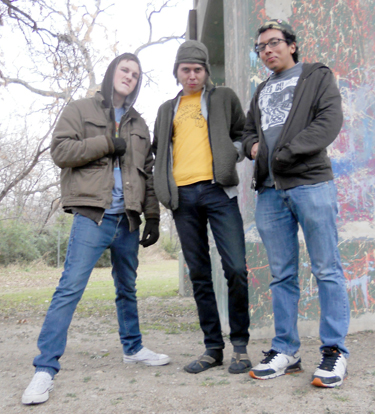 Morris and Baird met at Keller High School, where they instantly bonded over being punk outcasts in what they felt was white-picket-fence suburbia. Morris was new to town, having relocated from Alaska (via Arizona), and Baird had yet to sit behind a drumkit, but their shared interest in punk music was enough reason to start a band. They met Arauz at a Trinity Park punk show, where he was playing guitar with The Sand-Rags, and he felt that joining Rocket for Ethiopia was worth the commute from Carrollton, where he was attending high school. Almost immediately, Rocket for Ethiopia started playing shows at 1919 Hemphill, a Fort Worth DIY venue that all three agree is now a “second home.”

At first, making loud and fast punk music was about the “shock value,” Morris said. “The ideology stemmed from that, but it’s something that quickly became an obsession.”

As Baird practiced his way into being a good drummer, the guys kept writing more songs by re-using ideas and learning what did and didn’t work. In 2007, they felt they were ready to record. They went about it in a traditional punk manner, by grabbing the nearest tape recorder and pressing “record.” They didn’t give the cassette a name, but they felt it was a step in the right direction, even if the result was supremely lo-fi. “Noisiness and tape hiss are good qualities in punk,” Morris said.

To date they have three unofficial demos floating around the internet and have been included on an international punk compilation CD, Short Attention Span, assembled by Harry Hunt of Scotland’s Methodist Leisure Inc. label. Recording for posterity’s sake, however, is beside the point. “Releases were never our goal,” Baird said. “We just want to play.”

And play they have. They have done roughly 30 shows at 1919 Hemphill and dozens more at Dallas underground venues and at innumerable house parties. They also have been expanding a touring circuit around Texas. In December, the band made its first foray outside of the state. Morris contacted bands he liked all over the Southeast, and Rocket for Ethiopia took off in two separate cars for places like Missouri and Arkansas. With the exception of Arauz’ recurring car problems, the expedition was a success.

Punk in general is the common bond among its purveyors, but Texas has its own particular brand of “weird, oddball music,” Arauz said.

Although Rocket for Ethiopia isn’t trying to emulate the Butthole Surfers or Teenage Queers, the band intends to “continue the legacy of great Texas punk rock,” Morris said.

Part of Rocket for Ethiopia’s inspiration comes from living in a state that Arauz considers “a super-conservative corporate fortress,” he said.

Morris has felt alienated since he arrived in 2005, and he revisits the outcast paranoia in the group’s music. Texas, especially Keller, “causes reactionary ideas to come into being,” he said.

Morris, an avid reader, also folds philosophy into his lyrics, which he delivers in a barely decipherable semi-shout.

When developing the songs’ instrumental passages, no rules apply. Each member is a huge aficionado when it comes to punk music, but he might add parts from far-flung genres such as hip-hop, funk, and surf rock whether or not the part fits the rest of the song. The do-what-you-want mentality is central to what the band wants to portray.

In the end, it comes together well, and a Rocket for Ethiopia show is like a sonic encyclopedia of where punk has been and where it is going. Listen carefully, and your favorite punk band will be somewhere inside. Mainstream? No, but the band’s music, Baird said, appeals to “other punk rock dorks who have heard everything else.” l