This week’s films all trade in outright fantasy, but only one of them succeeds in turning the tropes of fable and science fiction into a bizarre and wondrous alternate reality.

You probably didn’t watch True Grit and think, “What this movie needs is an army of redneck moles flying through the air on the backs of bats and firing Gatlings at a carriage pulled by a javelina and driven by lizards.” Well, that is precisely what happens in the middle of the animated Western Rango, and while I don’t think True Grit would necessarily have been improved by that visual, it fits this gloriously strange movie perfectly. 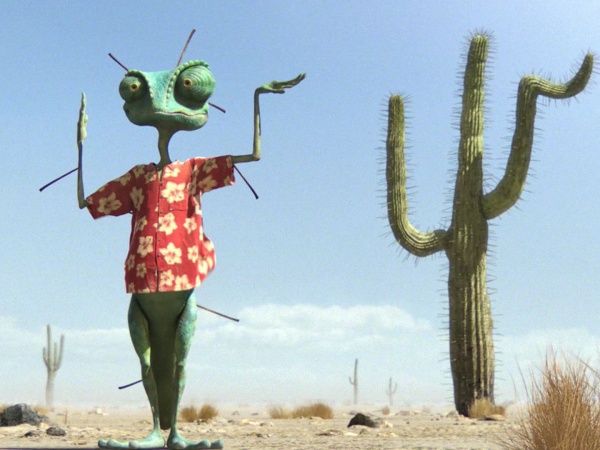 Johnny Depp provides the voice of a diffident but highly imaginative chameleon whose terrarium comes unmoored from his human owner’s truck and crashes on the highway, leaving him stranded in the middle of the desert. A crushed armadillo (voiced by Alfred Molina) points him toward Dirt, a town populated by desert animals that offers the chameleon a chance to re-invent himself. He names himself Rango, puffs himself up as a dangerous gunslinger, and then wins the citizens’ gratitude by accidentally killing a hawk that’s been terrorizing Dirt’s townsfolk. This gets him appointed sheriff, but it also draws him into a plot gleefully ripped off from Roman Polanski’s Chinatown, as Rango finds out that the cynical old tortoise who serves as Dirt’s mayor (voiced by Ned Beatty, channeling John Huston for all he’s worth) is secretly hoarding the water supply to control this town that’s gripped by drought.

This is the first animated film for director  Gore Verbinski and the longstanding special-effects firm of Industrial Light & Magic, and it’s an impressive debut for both of them. Verbinski is better known for the Pirates of the Caribbean movies, so it’s reassuring to see that his storytelling instincts haven’t been deadened by those bloated would-be epics. This plot, unusually complicated for a kids’ movie, is streamlined and easy to follow. Screenwriter John Logan (Sweeney Todd, Gladiator) helps out the director with an intelligent script that sneaks in some naughty humor that’s cleverly disguised enough to sail right over the heads of the kids in the audience. The gallery of jackrabbits, horned frogs, vultures, and other creatures that make up Dirt’s townspeople all have distinct personalities of their own, and Rango’s romance with a female lizard named Beans (voiced by Isla Fisher) adds to the proceedings as well.

Meanwhile, ILM brings Logan’s bountiful eccentricity to life, as witnessed by an early dream sequence with a giant windup fish swimming in mid-air through a desert landscape. A mariachi band made up of gloomy-looking owls serves as a Greek chorus for this story, and instead of riding horses, the animals here gallop into the desert on the backs of roadrunners. Whenever the action threatens to flag, a new hallucinatory visual pops up in the corner of the frame to draw your eye. There have been recent Western films this demented, but they’ve all been live-action imports from Asia (Wisit Sasanatieng’s Tears of the Black Tiger, Takashi Miike’s Sukiyaki Western Django, Kim Ji-woon’s The Good, the Bad, the Weird). The delirious, playfully surreal Rango is every bit as experimental, and every bit as much fun.

Philip K. Dick’s short stories have been a gold mine for filmmakers, responsible for everything from masterpieces like Ridley Scott’s Blade Runner to claptrap like Lee Tamahori’s Next. George Nolfi’s The Adjustment Bureau is based on Dick’s “Adjustment Team,” and I’m afraid it ranks with the worst of the lot.

Matt Damon portrays David Norris, a rising New York state politician who runs into a ballerina named Elise (Emily Blunt) near the end of his disastrous campaign for the U.S. Senate. She inspires him to an honest concession speech that makes him a presumptive favorite for the next election, which is the only time they’re supposed to meet. A shadowy group of men are meant to keep David and Elise apart, but they fall down on the job, and David winds up on the same bus with Elise three years later. The two of them quickly fall for each other, even though the men abduct David and darkly warn him that he has strayed off the path ordained for him by the entity they call “The Chairman” and that bad things will happen for David, Elise, and the entire world unless David leaves her.

The men are supposed to be angels, but first-time director George Nolfi (the screenwriter on Ocean’s Twelve and The Bourne Ultimatum, among others) utterly fails to create the illusion that they have divine forces working for them. Budget concerns might very well have prevented any sort of CGI extravaganza, but the prosaic reality that the angels inhabit seems to be some sort of deliberate choice on the filmmakers’ part. In any event, the angels come off as a bunch of guys in suits and fedoras that might have been inconspicuous in 1947 but in the present day just makes them look like aging wannabe hipsters. We can’t take them seriously when we learn that the fedoras have magical powers that allow the angels to instantly travel through any doorway in the world. The film topples over into sci-fi parody, while its attempts at intentional humor (depicting heaven as an understaffed bureaucracy) fall flat.

Nolfi doesn’t have much touch with actors, either. The usually solid ones portraying the angels are all off; John Slattery is fatally lightweight as the angel in charge, Terence Stamp is all empty bluster as his superior, and Anthony Mackie is lumpen and bland as the angel who takes pity on the couple and tells David how to beat the system. Damon displays some flickers during the concession speech, but the only time this movie sustains itself is during the early scene when David and Elise first meet in the men’s room of a fancy hotel. It’s a well-written exchange, with Blunt displaying a fierce, offbeat sense of comic timing. Too bad it’s the only human element in this movie that feels made by those bumbling, unimaginative, emotionally aloof paper-pushers whom The Adjustment Bureau presents as agents of the almighty.

Alex Pettyfer, on the other hand, isn’t trying for angelhood, but just to be the next Robert Pattinson. Like the Twilight star, Pettyfer is British, awfully pretty, and getting himself cast in fantasy sagas that preteen girls can sigh over. Having starred in I Am Number Four, he now has the lead role in Beastly, an oh-so-tragically-hip present-day reworking of the Beauty and the Beast fable based on a novel by Alex Flinn. He still doesn’t look like a superstar in waiting, but the role here shows him off to somewhat better advantage than the movie reviewed here two weeks ago.

He portrays Kyle Kingson, a rich, handsome, conceited jackass who attends a ritzy New York City private school. Somehow Kyle retains his popularity with his fellow students even after he uses an election speech to ridicule a goth classmate (Mary-Kate Olsen) about her looks. Ah, but the goth girl is an honest-to-goodness witch who curses Kyle, turning him hairless and giving him creeping tattoos and disfiguring facial scars. Only if he finds true love within one year will he be restored to his earlier self.

Writer-director Daniel Barnz made a visually striking feature debut a few years ago with an indie drama called Phoebe in Wonderland. He gets this movie off to a frenzied, overcaffeinated start depicting Kyle’s world as a rush of parties, dates with hot chicks, and shameless, soulless careerism — he tells the assembled students straight out that he’s running for class office only because it’ll look good on his transcript. It’s all more than a bit heavy-handed, especially the scenes between Kyle and his equally soulless dad, who’s too busy jabbering away on his cell phone to talk to his son for more than a few sentences.

After Kyle is cursed, the film shifts gears completely, as Kyle holes up in a secluded apartment, only venturing out late at night while wearing a hoodie. Through a series of wildly implausible coincidences not worth going through here, he shelters Lindy (Vanessa Hudgens), a studious former classmate who disdained him but secretly believed he had potential to change. Using an alias so she won’t connect him with the guy he used to be, he thinks she can break the spell. The two leads don’t have much chemistry, though Pettyfer shows some game as a guy who’s suddenly unsure that he can get the girl. Even though the High School Musical series made Hudgens famous, she seems miscast as a romantic lead. With her slouchy demeanor and slightly bored delivery, she would appear better suited for smart, sardonic best friend roles than leads. Barnz aims for the dreamy stasis that the Twilight movies traffic in, and while he’s more visually accomplished than any of the directors who’ve handled that saga, his movie still falls into the same sort of torpor.

The only breaks in the mood come from Will (Neil Patrick Harris), a blind tutor who visits Kyle’s apartment, ostensibly to keep up the kid’s education but mostly to listen to hockey games on TV and give him dating advice. Will is the equivalent of Lumière from the 1991 Disney film of Beauty and the Beast, and Harris plays him with a bratty, smarmy cool. He injects this movie with a heavy and much-needed dose of snark, even miming vomiting during one particularly sticky moment between Kyle and Lindy, and he very nearly makes this movie worth watching all by himself. Almost, that is.