The fifth film in 38 years by reclusive Texas auteur Terrence Malick is The Tree of Life, the polarizing film that drew boos and walkouts when it premiered at this year’s Cannes Film Festival and yet went on to win the top prize there. Accompanied by near-unanimous raves stateside, it’s the sort of movie destined to be called a “poetic meditation” even by observers with no aptitude for poetry or meditation. You may or may not find it all it’s cracked up to be — I thought it fell just short. This much is certain, though: It’s a hell of a thing to see. 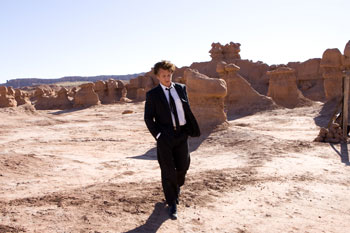 Much of the film is non-narrative, but what story there is concerns an architect named Jack (Sean Penn) looking back on his childhood growing up in Texas in the post-World War II era. (This plot is set in Waco, but the film was mostly shot in Smithville.) The oldest of three boys, young Jack (Hunter McCracken) suffers the brunt of the physical abuse from his martinet father (Brad Pitt), a man curdled by professional disappointments who tells his sons that toughness and unscrupulous determination are the only ways to succeed in a world that tramples on decent people.

Little Jack grows up close to Nature — one feels the urge to capitalize the word when discussing Malick’s films — and yet as a grown man, he lives in a soulless modernist apartment and works in a soulless steel-and-glass skyscraper, where he finds himself drawn to the one spot of green, a lone tree in a concrete plaza near his building. The irony here is a bit too cheap and easy, and so is the dichotomy of Jack being caught between his father’s harsh masculinity and the warm, nurturing femininity of his mother (Jessica Chastain). These parents aren’t characters so much as hazy archetypes that are familiar from Malick’s previous films. The human element is without doubt the weakest thing in this movie.

You won’t pick up on that right away, though, because everything is photographed beautifully enough to make you weep. Framing the story are wordless interludes that depict the formation of galaxies and continents and the beginning of life on Earth, along with a mystical vision of Jack clambering over a rock formation that looks like a coral reef to commune with the souls of his loved ones and acquaintances on a barren salt flat. Mexican cinematographer Emmanuel Lubezki has had a varied and distinguished career (Children of Men, Y Tu Mamá También, and, uh, The Cat in the Hat), but he’s never been involved with a project as ambitious as this one, and he responds with the performance of his career.

The voiceover narration whispered by various characters is practically scriptural in tone: “We cry out to you, my soul, my son! Hear us!” The soundtrack features music by Bach, Couperin, Berlioz, Brahms, Mahler, Mussorgsky, Respighi, Górecki, and Tavener, among others. Supplementing it is an orchestral score by Alexandre Desplat that’s distinguished by a resplendent waltz embodying the innocence of youth. All these elements contribute to a tone of awestruck wonder at the natural and man-made glories of the universe. Taking a cue from William Blake, Malick seems out to prove that everything that exists is holy, infusing numinous religiosity into his contemplation of a slot canyon’s curves, a Catholic church’s architecture, a soap bubble slithering in midair, an asteroid hurtling toward the Earth, a child at play. In such a climate, it’s no surprise to see Jack’s mother gently levitate off the ground and waft around the tree in the family’s front yard. The same goes for the flashback sequence of a baby hadrosaurus wandering through a prehistoric jungle, an unlikely but entirely appropriate foray into Steven Spielberg territory. Malick demonstrates a near-total control over the nonverbal language of cinema and creates an atmosphere so rarefied that it may very well leave you gasping for breath.

This 149-minute epic is impressive as hell and demands to be seen on the big screen. Its willingness to tackle the biggest questions of human existence puts it in the same class as Stanley Kubrick’s 2001: A Space Odyssey and (more esoterically) Godfrey Reggio’s Koyaanisqatsi. Malick’s warmth and generosity of spirit, however, make The Tree of Life superior to either of those films. Even though it all left me a bit cold regardless, I can readily see how this ambitious and intensely beautiful work could send other viewers into a trancelike state. The film gives a glimpse of the miracle of human consciousness amid the vastness of the cosmos. Ultimately, though, this isn’t a movie that you analyze. You’re better off just sitting back and letting it engulf you.

The Tree of Life