The Italian film The Double Hour finally secured its release in American movie theaters last year. That’s when the buzz started building among cinephiles in this country about this exceptionally twisty thriller that often left viewers afraid to give away too much of the plot to those who hadn’t yet seen it. Now it’s available for us to look at, and even if there turns out to be a bit less to this movie than meets the eye, it’s still an awfully clever piece of work.

The setup revolves around speed dating; apparently the American fad from the early 2000s didn’t reach Italy until 2008, when the movie was filmed. The story begins with Sonia (Ksenia Rappoport), a Slovenian hotel chambermaid who speaks heavily accented Italian, winding up her otherwise unproductive evening of speed dating by meeting Guido (Filippo Timi), a burned-out, lonely ex-cop who’s starting a new career as a private security consultant in the mountain resort town of Turin. After the two of them agree to a proper date, he takes her to the woods outside a luxurious villa where he has been working on setting up an alarm system. That’s where three masked gunmen take them hostage, demanding access to the property. When one of the criminals signals his intentions to rape Sonia, Guido leaps into action and is shot to death. 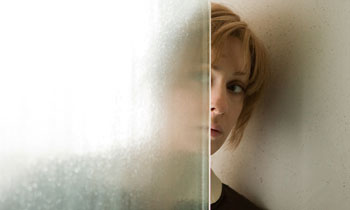 Yes, that’s right. One of the main characters is killed approximately 15 minutes in. However, in this movie, “dead” doesn’t necessarily mean “gone.” The title comes from an early bit when Guido sees that the time is 23:23 (11:23 p.m. to us) and notes a superstition related to such “double hours.” In the aftermath of the shooting, Sonia starts to experience all sorts of weird things at double hours. She hears Guido’s disembodied voice and, on at least one terrifying occasion, actually sees him. What’s happening here? Is she going through some dissociative form of survivor’s guilt? Is she brain-damaged from the bullet wound in her head, a collateral result of Guido’s shooting? Or has Guido in fact returned from the grave to haunt her? And what about the unnamed young woman (Chiara Nicola) who, in the movie’s opening sequence, suddenly and inexplicably kills herself in her hotel room while Sonia is cleaning it?

Among other things, this movie is a useful reminder of the primal pleasures of not knowing where the story is headed. In an age of sequels and remakes and blockbuster franchises where most of the fanbase knows the story ahead of time, crafting a movie in which the story developments are completely unpredictable (and yet logical instead of arbitrary) seems a harder job than ever.

This impressive debut film by music video director Giuseppe Capotondi consistently foils your expectations and leads you into blind alleys that leave you wondering “Now what?,” most notably the outrageous plot twist about two-thirds of the way through that involves a serial killer and a shallow grave. As in Black Swan or the Paranormal Activity movies, the mental delusions/supernatural occurrences are spookier because they arise from a setting of unvarnished realism. Capotondi and his production team do well to turn the old, stately, relatively small hotel where Sonia works into a sinister place where ghosts can appear even in the broadest daylight or on a security camera. Lest all this sound too theoretical, the movie also has the sexual chemistry between the brooding, kohl-eyed Timi (best known for portraying Mussolini in last year’s Vincere) and the languid, long-legged Rappoport (a Russian actress, despite her English surname) to keep the proceedings somewhat grounded.

When this movie ultimately begins to show its cards, the revelations aren’t quite as mind-blowing as those of other similar extensively plot-driven thrillers like Christopher Nolan’s Inception and Guillaume Canet’s Tell No One. (By the way, how strange is it that all these movies were released during the height of summer, when stupid blockbusters are supposed to rule the roost?) Nevertheless, The Double Hour is, like those other films, a piece of popcorn entertainment that gives your brain a furious workout. If you can find it playing at 5:05 or 10:10, so much the better.