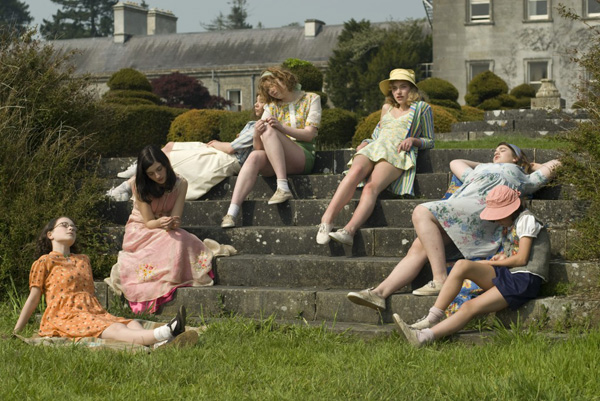 If the new movies out this week are too male-centric for you, you might want to check out Cracks, which saw limited release in America earlier in the year, though it never played in North Texas. I’m not sure why; it’s not a great film, but it’s a damn sight more interesting than some of the stuff that did play the art houses in Dallas. It’s now available on DVD.

The film’s based on a novelette by the prolific South African fiction writer Sheila Kohler. The setting is moved from South Africa in the 1960s to an island off the coast of England in the 1930s. The story takes place at an all-girls’ boarding school, where the most popular teacher is Miss Gribben (Eva Green), known as Miss G to her adoring students. Most adoring of all is Di Radfield (Juno Temple), Miss G’s personal favorite and the commander of a clique of girls, most of whom are on the diving team that Miss G coaches. The applecart is upset by the arrival of Fiamma Coronna (María Valverde), a Spanish girl from an aristocratic background who is better at everything than Di is. Miss G suddenly has a new pet to lavish affection on, and Di doesn’t take it well at all. When Fiamma turns out to be impervious to both Miss G’s attention and the intentional slights delivered by Di and her clique, Di shifts into high gear and determines to drive the new girl out at all costs.

Would I be overselling this movie to call it a cross between Lord of the Flies and Mean Girls? Probably; it’s nowhere near as earth-shifting as all that. Yet that’s the closest comparison I can make. I wasn’t able to get my hands on a copy of the book, but my research shows a couple of differences from the movie. The book is narrated in an impersonal collective first-person voice. Think Dostoyevsky’s The Brothers Karamazov, or more recently, Jeffrey Eugenides’ The Virgin Suicides. The movie doesn’t do that, which is too bad — I think Sofia Coppola’s 2000 film version of The Virgin Suicides is more powerful because it finds a way to retain that impersonal narrator. Also, Kohler inserts herself as a minor character in her novel, in the form of a girl who tells morbid stories. That’s gone as well. And unlike the book, the movie never explains its title: “crack” is a term that the girls use for a girl-on-girl crush. Those crushes come into play in a major way here.

This is the filmmaking debut of Jordan Scott, the daughter of longtime director Ridley Scott. She struggles occasionally with pacing and tone, and she puts in way too many aestheticized slow-motion shots of the girls leaping off the diving platform and gracefully splashing into the water. She does better with the atmosphere; the film was actually shot in Ireland, and the island setting increases the sense of claustrophobia, that these girls are cut off from the outside world without adequate adult supervision. She’s also good with the rivalries and jealousies that permeate this homosocial environment, and she gets the vibe exactly right in a hormonally charged bacchanalian scene where the girls throw an alcohol-fueled party for St. Agnes’ Eve. This is a promising debut for Scott, and with her lineage, you can bet that she’ll be given another directing job someplace.

I think the best thing here is the way the two main characters are drawn. Green is best known as the Bond girl in Casino Royale. She’s shown to better advantage in a complicated role like this. The exotically beautiful Miss G wears funky outfits, smokes cigarettes, plays jazz records, regales her students with stories about her travels through the far corners of the world, and tells them to reach for the stars and do everything with passion. You can see why the students love her. Yet at the same time, there are disquieting traits about her. She can be petulant, manipulative, and even cruel. (And by the movie’s end, she’s guilty of far worse.) Green does justice to all these contradictory traits. If anything, this movie functions as an excellent antidote to inspirational teacher films like The History Boys, Dead Poets Society, Mr. Holland’s Opus, and (what must have been the closest model for this movie) The Prime of Miss Jean Brodie.

There’s similar layering with Di, though I find it difficult to say how without giving too much of the plot away. Let’s just say that her reaction to the events that she does so much to set in motion isn’t at all what you’d expect. Juno Temple, who looks like a teenage version of Renée Zellweger, played Cate Blanchett’s daughter in Notes on a Scandal and the rape victim in Atonement, though if your taste in movies is more lowbrow (or not so Anglophile), you might have seen her doing a terrific American accent as a slave girl in Year One. She’s also in the Dark Knight sequel coming out next year. Here you can feel the aching need to assert her dominance that drives the terrible things that Di does. She’s quite as intimidating as Rachel McAdams in Mean Girls and the late Kim Walker in Heathers, which is heady company indeed, but there’s an undercurrent of sadness there that makes her character’s later developments plausible, and makes this monstrous person a bit more of a human.

Anyway, despite its shortcomings, this is a movie that adds to our knowledge about the dynamics of schoolyard bullying, and it’s a decent enough piece of pulpy entertainment on its own.