The powers that be are marketing Warrior as a mixed-martial arts movie, but it’s not really about MMA any more than The Social Network was about Facebook. It’s really a story of two brothers from working-class Pennsylvania Irish stock coping with their shared harsh background and their different circumstances in life. The thing about that is, audiences seem reluctant to turn out for a story like that without some more marketable element in it. Last year, Ben Affleck pointed out that his The Town would have been a perfectly viable movie without the bank robbery storyline, but then how many people would have bought tickets to that movie?


For this state of affairs, you can blame Hollywood and its inability to sell such films, if you wish. I keep remembering a speech from Preston Sturges’ 1942 comedy Sullivan’s Travels, in which a butler tells his Hollywood-filmmaker employer that working-class audiences want escapism in movies, not an accurate reflection of their own lives. So far, I haven’t come across evidence to the contrary. Warrior tries to give the audience both things, the depiction of working-class life and the escapism, using MMA as its hook. While it’s no masterwork, it still pulls off that difficult feat reasonably well. 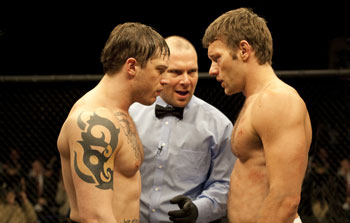 The film begins with Tommy (Tom Hardy), a U.S. Marine who’s just returned home from Iraq, arriving on the Pittsburgh doorstep of his estranged alcoholic dad Paddy (Nick Nolte). The drunken old man who made life hell for Tommy and his brother Brendan has given way to a three-years-sober man who badly wants to atone for his shortcomings as a parent. When Tommy sees a path to entering a major single-elimination MMA tournament in Atlantic City, he turns to his dad, who trained him to fight. Meanwhile, Brendan (Joel Edgerton), a former UFC fighter now working as a high school physics teacher across the state in Philadelphia, finds himself upside-down on his mortgage after paying his daughter’s medical bills. Rather than lose his house, he comes out of retirement to pursue the $5 million prize. The tournament sets the brothers, who haven’t spoken to each other since their teens, on a collision course.

Director/co-writer Gavin O’Connor handles the material with a light touch and does everything he can to steer this movie clear of soapy excess. His feel for the characters’ straits comes through in an early exchange between Brendan and a not unsympathetic banker (Noah Emmerich) who lays out his financial options. The subplot with Brendan’s trainer (Frank Grillo), a gym owner who has his fighters listen to Beethoven to help them focus, comes through sharply as well.

What O’Connor can’t do is keep this 138-minute film from sagging noticeably before the climactic tournament, with the confrontation between the brothers on a beach failing to provide any spark and the scene in the hotel room when Paddy falls off the wagon going on entirely too long. The director is no stranger to sports films, having directed the 2004 hockey drama Miracle, but he doesn’t provide much insight into MMA. By contrast, David Mamet’s 2008 film Redbelt is much more informative for those who are newcomers to the sport, like me.

This film hangs on the two lead performances, and the actors are not evenly matched. I’ve seen Edgerton in a number of films without him ever making any sort of impression on me. Except for one bit late in the film when Brendan is in the ring trying to pin a much stronger fighter, the Australian’s performance is typically indistinct, and he keeps losing the handle on his Pennsylvania accent.

It’s Hardy who comes out of this shining, playing Tommy as a damaged case outside the octagon and a ball of sheer fury inside it. You’ll have a tough time recognizing this English actor as the same one who portrayed the flamboyant criminal psychopath in 2009’s Bronson or the fey, elegant, witty forger in Inception. Harboring a secret from his war experience and full of unresolved rage at his family, Tommy can’t put his feelings into words. Hardy speaks for him in the way he shifts his weight from foot to foot and looks uncomfortable in his own skin. He only becomes sure of himself in the fight sequences near the end, dispatching opponents with brutal skill, deaf to the crowd’s adulation and storming grimly out of the cage after his victories without even waiting for the referee to raise his hand. The way Hardy taps into this character’s sadness and resolve will stay with you long after the last fighter in Warrior has tapped out.