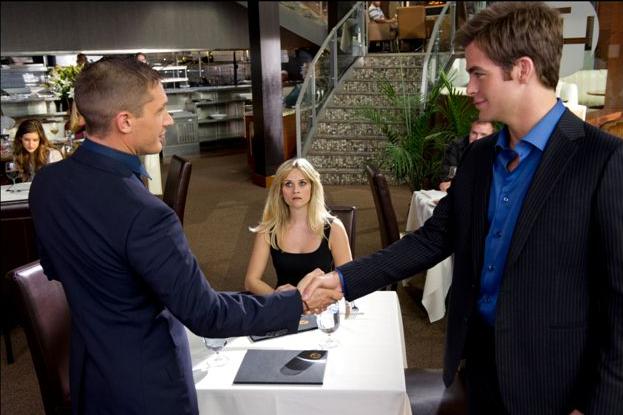 The setup involves Lauren (Reese Witherspoon), an L.A. consumer products tester who flees a broken relationship by dating two guys at once — brash womanizer FDR (Chris Pine) and bruised romantic Tuck (Tom Hardy) — not knowing that they’re best friends and fellow CIA agents consigned to desk duty after killing a bunch of dudes during a covert mission. The guys are no morons; they quickly figure out that they’re dating the same woman. Then again, maybe they really are morons, because their solution is to keep dating her without letting on to her that they know about each other. Wacky hijinks fail to ensue in the saddest possible way.

Neither they nor the filmmakers consider the idea that Lauren might be a foreign operative who’s dating two CIA guys to pump them for information. Also lost on the filmmakers: These characters are all massive jerks. Lauren never gets busted on her two-timing, and the agents are never called on the carpet for wasting agency resources and manpower surveilling each other and sabotaging each other’s dates while an international terrorist whom they’ve been tracking (Til Schweiger) roams free on American soil. There are no grown-ups in this movie. The filmmakers should have gone Spy Kids on us and cast 13-year-olds in the lead roles. Then the characters’ immature antics would make sense.

Amoral behavior like this would be all right if these people were at least fun to be around. The only actor who comes through on that score is Pine, who contributes a sharp, loose-limbed performance that’s just the right degree of cartoonish. He’s fighting a losing cause, though. Hardy is hamstrung by his wet-blanket role, while Witherspoon is reduced to playing a collection of neurotic single-gal clichés. As Lauren’s best friend, Chelsea Handler tells watered-down versions of her usual sex and liquor jokes — why cast her at all if you’re going to constrain her with a PG-13 rating?

Just as he did with the Charlie’s Angels films, McG directs with all the desperation of a birthday-party clown trying to amp up some bored kids by asking them, “Isn’t this fun?” He does manage one dialogue-free scene when Lauren obliviously bops around her house in her underwear to Montell Jordan’s “This Is How We Do It” while first one agent and then the other silently breaks in and plants surveillance equipment. Insulting though that is, the touch of light-fingered farce here is badly missing from the rest of This Means War, which has only insipid action and putrid romance in its place.