So what’s it gonna take for Hayao Miyazaki to get his due in America? The co-founder of Studio Ghibli has built his legacy on animated films for children, and his studio’s body of work is every bit as strong as Pixar’s. Yet despite that, and despite the fact that they’ve had Disney’s marketing muscle behind them for the past decade, Ghibli’s films have attracted no more than a passionate niche following here.


Disney might just be the problem; they’ve seemed at a loss as to how to promote Miyazaki’s resplendently weird fantasies to American kids or their parents. Ghibli’s latest film, The Secret World of Arrietty, lands in theaters this weekend (dubbed into English), and you shouldn’t let this opportunity slip to glimpse the Japanese outfit’s extraordinary artistry. 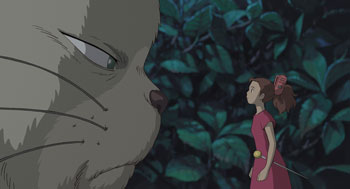 Based on Mary Norton’s 1952 novel The Borrowers, the story centers on Arrietty (voiced by Bridgit Mendler), a 13-year-old girl who is a member of a race of people only a few inches tall who dwell unnoticed in human houses and live by “borrowing” small quantities of foodstuffs and supplies from the humans — the “beans,” as the Borrowers call us. She and her parents (voiced by Will Arnett and Amy Poehler) are the only family of Borrowers left in their remote country house, and their home is jeopardized when Arrietty is spotted by Shawn (voiced by David Henrie), a sickly boy whose divorcing parents have sent him there to recover his health. While her parents follow Borrower custom and start packing up to leave once the humans are aware of them, Arrietty tries to convince them that befriending Shawn might not be so bad.

The 71-year-old Miyazaki serves only as a co-writer here, handing over the direction to Hiromasa Yonebayashi, his 28-year-old protégé who has done animation work on Ghibli films since 1997’s Princess Mononoke. (He must have been a precocious kid.) Visually, this film is indistinguishable from Miyazaki’s work. There are no set pieces as eye-popping as the cleansing of the stink spirit in Spirited Away, but the master’s visual style is still everywhere in evidence, from the verdant décor of the Borrowers’ abode under the floorboards to the craggy face of the old housekeeper (voiced by Carol Burnett) who declares war on the Borrowers. The gossamer beauty of Miyazaki’s films and the earthiness that keeps those films from floating off into the ether are all very much intact.

Which isn’t to say that the transition is completely smooth. Early on, the rookie director commits a number of bobbles that the old master wouldn’t have made. The voiceover narration and Shawn’s initial spotting of Arrietty are clumsily handled, and the pop song by Cécile Corbel over the opening sets the wrong tone. Corbel and Dale Sison composed the music for this film, and while their work is acceptable, you do miss the musical contributions of Joe Hisaishi, who has scored all of Miyazaki’s films and whose crystalline, coloristic music offers the perfect accompaniment for their visuals. The American voice cast is surprisingly bland, though Arnett does an excellent job as Arrietty’s gruff, laconic but kindhearted dad. (I would have liked to hear the British-dubbed version with Saoirse Ronan, Mark Strong, and Olivia Colman, but I guess I’ll have to wait for the DVD.)

However, none of that matters during a quiet early scene when Arrietty’s dad takes her on her first borrowing expedition. As we watch the Borrowers silently navigate a kitchen designed for much larger people, some celestial gear clicks into place, and the film steals your breath with its strange and delicate magic. A sense of wonder was largely absent from the crass, ham-fisted 1998 live-action version of this story, but Yonebayashi finds that sense and largely sustains it throughout the film. Even though Henrie sounds too adolescent for his role, the friendship that develops between Shawn and Arrietty becomes something piercing, especially when the boy (who has a potentially fatal heart condition) prepares her for the next stage of her life by giving her the perspective of someone living with the distinct possibility of imminent death. The Secret World of Arrietty may be short on spectacle compared with other Miyazaki films, but with so much junk made for kids cluttering our theaters now, its contemplative note and visual splendors are more than enough to distinguish it. Unlike the Borrowers, this movie cries out to be seen.

The Secret World of Arrietty