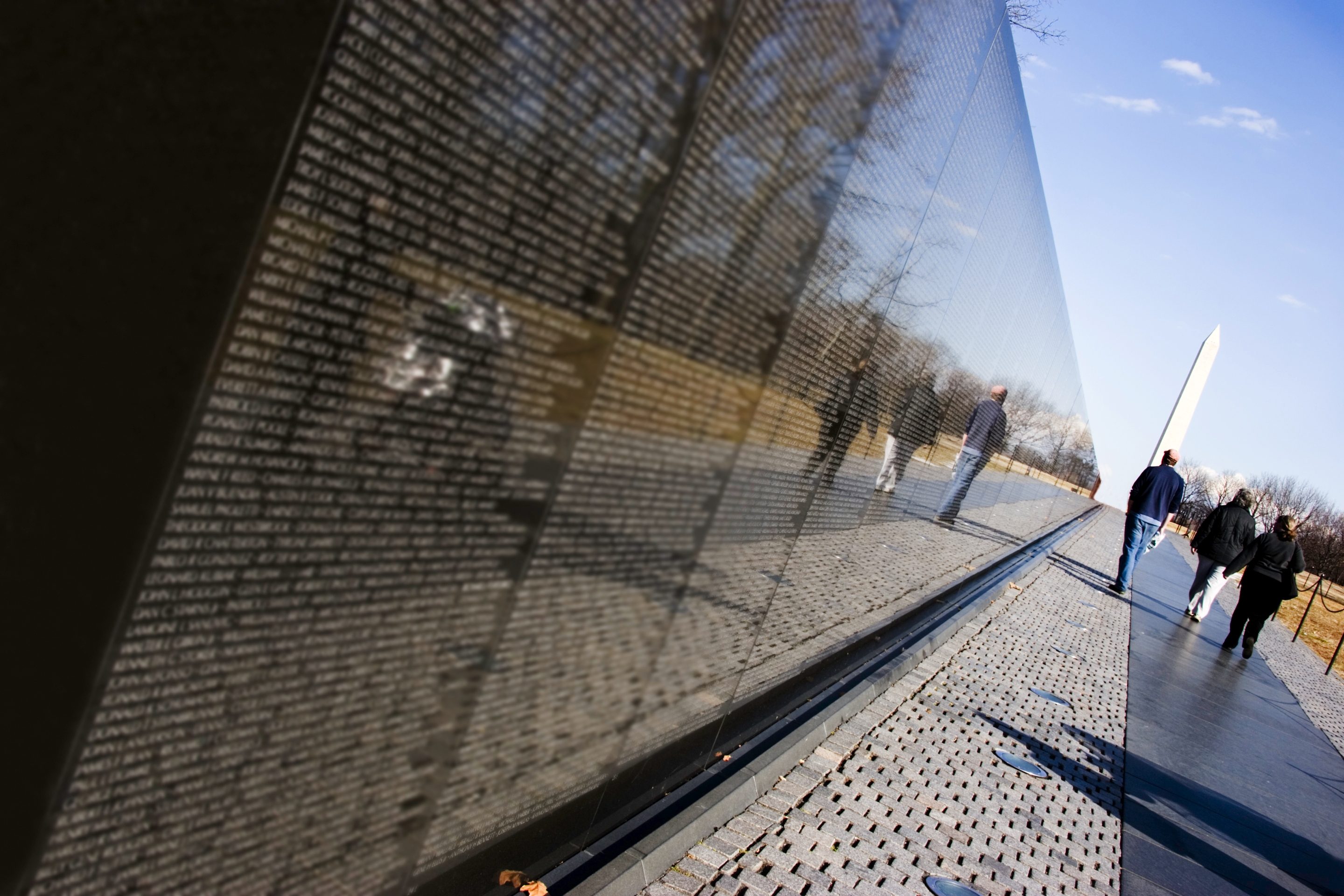 Say, how many war memorials are there in the world? Must be thousands, right?  And how many do you suppose are engraved with the names of every single man and woman who died or went missing in the conflict they’re purporting to honor? My guess would be just one, located in Washington, D.C.

I was in D.C. recently, checking out the Occupy Movement. No, I didn’t get arrested or pepper-sprayed. But there were workshops, teach-ins, and strategy sessions going on somewhere every day. I found a movement in transition but very much alive. I think it’s safe to say that the forces of greed, the guardians of the status quo, may actually have something to fear.

But I also played tourist.  How can you not, in the nation’s capital? I was particularly eager to make my first visit to the memorial created in 1980 by a then-unknown young architect named Maya Ying Lin — the Vietnam Veterans Memorial Wall.

Lin’s design sparked a fierce controversy, often the case with great works of art. No glorified depictions of war, no patriotic inscriptions — just names engraved in smooth granite, more than 58,000.

James Watt, Ronald Reagan’s secretary of the interior, at first refused to issue a building permit for the memorial. There was criticism, too, that the artist was Asian-American. Had it not been for blind judging, Maya Lin believed, her design would never have been chosen.

Reagan did not show up for the unveiling.  Nor did former Presidents Nixon or Ford. Reagan finally visited a year later, for seven minutes.

Now, the memorial seems almost universally accepted. One reason for its greatness, I believe, is that it takes no position for or against what happened. Its effect on the senses is far more subtle and deep.

Novelists often say they can’t write until they know the names of their characters, how just the sound and rhythm of a name brings forth a face and finally a fully imagined person. The names on Maya Lin’s Wall have that effect.

You begin with the abstract: a name, a faceless someone who died in war. But soon the name takes on a life. You can’t help it — you picture parents, brothers, sisters, maybe a girlfriend, those who were left behind who perhaps never fully recovered from the loss. You may actually see some of those loved ones, as I did, huddled over pieces of paper — a map of the names — looking for their own sweet someone on the Wall. And you might witness some white-haired veteran reaching out to touch the name of a buddy he’d known in another time and place. I can tell you, it will be hard to resist saying something like, “Excuse me, friend. I’m so sorry,”  and putting your arm around him.

But keep looking.  Suddenly, you’re aware of others in the Wall, reflections of the living, moving shadow-like behind the names. You see your own self staring back, caught in the silent grip of those who, as Lincoln once said, “gave the last full measure of devotion.”

That’s when you realize the greatness of the Wall.  How it forces us to confront even ourselves in the mirror-like surface, to face that which we all share — complicity.

I left the Wall to visit the National Cemetery across the Potomac, where I saw crisp white markers, each one a soldier, another name, in rows that seemed to go on forever. While I was there, someone mentioned another wall in Irvine, Calif., similar to Maya Lin’s. It’s the first memorial to an ongoing war, with names again engraved in stone. The dead in Iraq and Afghanistan are updated yearly. There are some 5,000 now, with room for 3,000 more.

And then I thought, how much more room do we need for burying dead soldiers? How many more slabs of granite must we devote to the carving of names?

It was late evening when I returned to the Wall. Only a few people remained. I guess I just wanted another look, a deeper sense of remembering, so I could tell others. But how do you do that when there are so many?

So I give you these few names taken from the Wall. Each represents a life that did not get lived out. Did not get fulfilled. I ask you to linger on them awhile. Let them stand for the rest: Joseph F. Carroll. Leon V. Fox. James H. Murphy. Donald R. Pryor. Raul De Jesus-Rosa. Jesse Lee Moses. John R. Poe. Ovell Spruill. Eddie B. Cooke Jr. Mary T. Klinker.