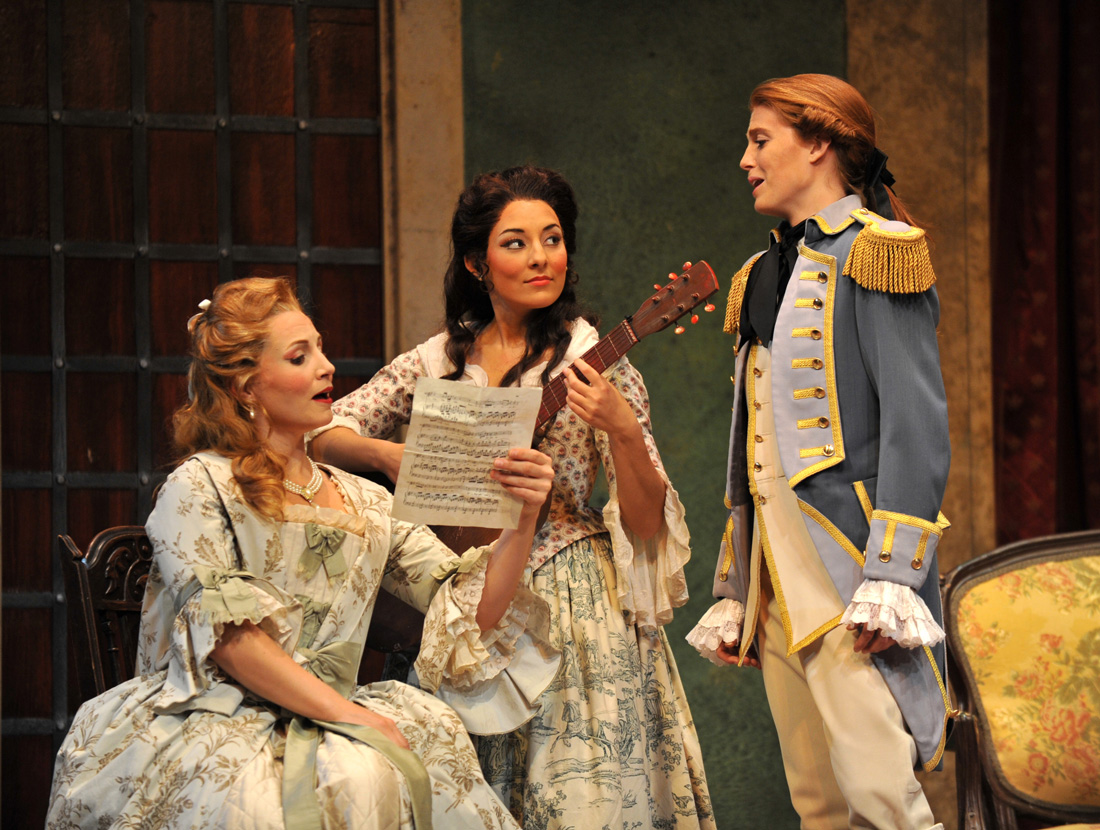 Fort Worth Opera general director Darren Woods has a leg up in finding fresh young talent; since he serves off-season on the jury for the Metropolitan Opera’s regional auditions and directs a summer opera workshop for young singers each year in upstate New York. Not having a budget that allows for expensive stars, he finds the best up-and-coming talent around and brings it to Fort Worth.

The result last weekend was one of the most satisfying performances of Mozart’s The Marriage of Figaro you’re apt to see. On its opening night, the popular comedy sported a strong, stylish cast and was brilliantly directed by Eric Einhorn making his Fort Worth debut.

The opera traces the complicated path of Figaro, Count Almavivia’s servant, as he tries to wed the countess’ maid, Susanna, while avoiding having the count bed the bride before the nuptials. Things are further confused by Cherubino, a teenage imp in love with every female he sees, who is eventually sent off to war –– everyone’s dying to get rid of him. Further entanglements, including the arrival of a contract that Figaro once signed agreeing to wed a middle-aged shrew in exchange for a loan, challenges even Figaro’s remarkable ingenuity before all is resolved in blissful happiness.

A number of debuts were made here, either in a role or with the company, and sometimes both, including Donovan Singletary in the title role. A tall, strapping figure with a rich, full bass-baritone and easygoing presence, he owned the role, and it was only his first Figaro. It’s hard to believe he just acquired the many nuances and moods seen here, and his innate musicality is awesome.

The same could be said of soprano Andrea Carroll, a recent graduate of the Manhattan School of Music singing her first Susanna and making her professional debut. Hearing Carroll’s large, agile voice and seeing her assured performance, you would presume this was a familiar role for the young singer, until you notice the program note.

Soprano Jan Cornelius looked ravishing as the countess, with her hair piled high and an aristocratic profile that was the personification of 18th-century beauty. She won the FWO’s Marguerite McCammon Voice Competition the week before the performance, and the voice is full and rich. I prefer a mellower sound for the countess, but in a debut performance she was pleasing and persuasive.

Mezzo-soprano Wallis Giunta was winsome as the male Cherubino, having no problems creating a scatterbrained youth who constantly falls into scrapes and has to be rescued. Her voice is pleasant and carries well. The handsome baritone Jonathan Beyer as the count completed the quartet of leading singers, with a strong, easy-to–listen-to performance.

The serviceable scenery was designed by Michael Wingfield for the Sarasota Opera, and the wonderful costumes were created by Allen Charles Klein.

Guest conductor Stewart Robertson led a spirited performance by the Fort Worth Symphony in the pit. From where I was sitting, about a third of the way back in the orchestra, the sound seemed muffled. Maybe the elevator supporting the orchestra pit needed to be raised a bit.

Regardless, nothing could dampen the joy of the show, which should be on everyone’s list of things to see. — Leonard Eureka

Composer Jake Heggie’s Three Decembers stands as the only truly contemporary production in Fort Worth Opera’s annual festival, an event designed both to satisfy the old guard and win over the new. (Mark Adamo’s Lysistrata was a new take but on an old yarn.) North Texas has been very receptive to Heggie, whose Dead Man Walking was performed by FWO in 2009 and Moby-Dick performed by Dallas Opera last year. The crowd at Sunday night’s performance was sparse but enthusiastic, responding enthusiastically to the highs and lows of Heggie’s operatic version of Terrence McNally’s play about a Broadway diva and her two damaged adult children. The piece could have used a little more warmth, however.

Though fraught with histrionics, Three Decembers had only one truly touching moment, and it was non-singing, when Charlie (baritone Matthew Worth) sat on the ground in his empty San Francisco apartment and hugged a small stack of cardboard boxes of clothes worn by his lover Burt, who had just died from AIDS. The rest of the production was heavy on explanation. There must be more creative ways for grown children to reflect on their absentee parents than by rehashing old, vague memories.

As diva Madeline, soprano Janice Hall, making her fifth FWO appearance, was a commanding presence, singing elegantly, powerfully, and never piercingly. Soprano Emily Pulley, as daughter Beatrice, and Worth, both making their Fort Worth Opera debuts, were spectacular. Worth cut a likable figure, had a booming voice with great control, and delivered Heggie’s gallows humor with precise timing and cadence. Pulley had a big, bright voice and acted expertly –– at one point near the end of the opera, she sang boldly while waving a full glass of wine in front of her without spilling a drop.

Broadway is definitely at the heart of Three Decembers –– Heggie had considered taking the Great White Way before remembering that he’s an opera composer first. Sumptuous melodies flicker here and there but come to life fully only once, during “Daybreak,” a song performed by Madeline to her Broadway audience: us. Touché, Heggie.

Taking place in the winters of 1986, 1996, and 2006, Three Decembers manages to squeeze in a lot of dramatization. With a running time of only about 90 minutes and cast of just three, Heggie’s most recent FWO contribution is economic, tight, and sweet if occasionally a little cold. –– Anthony Mariani