My own first name isn’t exactly common due to its unconventional spelling, so when I see athletes who share my first name at the Olympics, they’re usually Norwegian skiers. However, Kristian Thomas is a British gymnast, and he came up large on Monday when Great Britain won its unexpected bronze medal in the men’s gymnastics team competition, a feat the British haven’t accomplished in more than a century. Well done, Kristian!

Another Olympian with a funky name is Destinee Hooker, a volleyball player for USA’s women’s team. I would make fun of her name, but when your last name is Hooker, you’re pretty much screwed no matter what your first name is. Both the U.S. women’s and men’s indoor volleyball teams are doing well in pool play, and I continue to be puzzled as to why indoor volleyball isn’t a bigger sport in America. Everyone watches beach volleyball for the bikinis, but the indoor game is absolutely badass, with more players on each side making for longer rallies, and the hard surface making faster play and 100-mph shots possible. You should give indoor volleyball a look, especially since USA are favorites to medal.

In the wake of Gabby Douglas winning the women’s all-around gymnastics competition, people are rightly celebrating the first black gymnast to stand atop the medal podium. I’m also thinking about racial diversity at the Olympics. Our men’s indoor volleyball team is all Caucasian, while our women’s team in that sport has a mix of white players and African-Americans. I’d guess that African-American men who possess height and leaping ability (both requirements for volleyball) are busy playing basketball instead because it’s more lucrative. At least that’s what I thought until I looked at the Brazilian men’s team and saw no black players there, either. Surely basketball can’t be doing the same thing over there. Are tall black men who can jump being siphoned off by soccer in Brazil? For that matter, USA’s women’s soccer team is all white, while our men’s soccer team (which didn’t qualify for the Olympics) is racially diverse. It’s a matter for sports sociologists to look into.

Speaking of soccer, Japan’s women’s team tanked their match against South Africa (or at least made no effort to score, by their coach’s admission) so that they wouldn’t have to travel from Wales to Scotland for the quarterfinal match. The joke turned out to be on the Japanese, because Great Britain’s upset victory over Brazil means that the Japanese now have to tangle with the Brazilians. That will be a good game. Meanwhile, USA’s women are in the easier half of the draw, though a possible semifinal match against a Great Britain team with the home crowd behind it is looming. Britain’s match against Brazil drew a crowd of more than 70,000, a terrific number for a women’s match in the U.K.

Four Chinese badminton teams tanked their matches outright, and did it so poorly that they wound up being banned by the judges. It sounds like a thoroughly farcical turn of events. There’s another story about Chinese athletes that’ll make you blanch: After diver Wu Minxia won a gold in sychronized diving, her father revealed that he hadn’t told her about her grandmother’s death a year ago, nor about her mother’s eight-year battle with breast cancer, because he didn’t want to distract her from her training. This would seem to play into stereotypes about the Chinese way of training athletes, but it appears that a sizable segment of the Chinese public is disgusted by this story.

The American boxers are having a rough time of it, and U.S. dominance of synchronized swimming is long gone, but neither of them are having as bad a time as the Australian swimmers. The Aussies take great pride in their swimmers, but their athletes this year have only collected one solitary gold medal, with Stephanie Rice, Emily Seebohm, and James “The Missile” Magnussen all underperforming. It’s causing wailing and gnashing of teeth Down Under.

The basketball world is buzzing over the U.S. men’s 83-point smackdown of a severely overmatched Nigeria, with USA scoring 47 points in the first quarter. (In international basketball, the quarters are only 10 minutes long!) But there’s been some interesting developments other than American dominance. The France-Australia women’s game had a bonkers ending to regulation, with the Aussies tying the game at the buzzer with a contested 55-foot three-pointer, while a three with four seconds left gained Russia’s men a victory over Brazil. Argentina-France had the spectacle of Tony Parker and Manu Ginóbili as opponents instead of teammates, with Ginóbili and Argentina prevailing over France and Parker (who had a bad shooting day). Amid Tunisia’s heavy defeat to USA, Tunisian center Makram ben Romdhane scored 22 points, collected 11 rebounds, and had a breathtaking coast-to-coast dribble and dunk. If I’m an NBA team looking for a big man, I’m frantically digging for any information on Ben Romdhane right now.

I watched Zhang Ji-Ke pull out a narrow victory over Wang Hao for the gold medal in men’s table tennis. If indoor volleyball is a sport that’s much better on TV than you think, table tennis is considerably worse than you think. You probably remember the scene from Forrest Gump and think that table tennis is spectacular long rallies of two guys standing five feet away from the table and smashing shots at each other. This does actually happen sometimes, but far more often the points consist of three or four shots before someone meekly hits the ball into the net or off the table. Not fun. (If this sounds familiar, I posted something similar about table tennis four years ago to this blog, but since our blog posts from 2008 appear to be lost in the ether, I thought I might do well to repeat it.) Wang Hao has now lost the last three Olympic gold medal finals. He’s the Andy Murray of table tennis.

NBC failed to show any footage from Kayla Harrison’s gold medal win in Olympic judo, making her the first-ever American judoka to win gold. The entire American judo community is celebrating that one. Nor did it mention how Harrison overcame the sexual abuse she suffered at the hands of her coach at age 13. Bad miss there, NBC.

You don’t have to look far to find bitching about NBC’s coverage, but I won’t be joining in. It’s mostly because I don’t have anything new to add. Also, Michael Rosenberg argues provocatively that you would do the same things as NBC if you were in charge of the network’s Olympic coverage. For all the well-deserved complaints about jingoism and sappiness, NBC’s Olympic coverage pulls in monster ratings regardless. Still, I don’t think I’d adopt NBC’s high-handed “it’s your own fault if you don’t enjoy our coverage” attitude.

Oh, and people are talking about U.S. basketballer Anthony Davis having a unibrow, but I found an even better one on Brazil’s men’s volleyball team: Rodrigão. 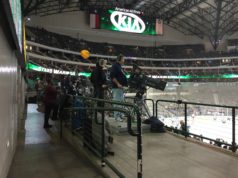