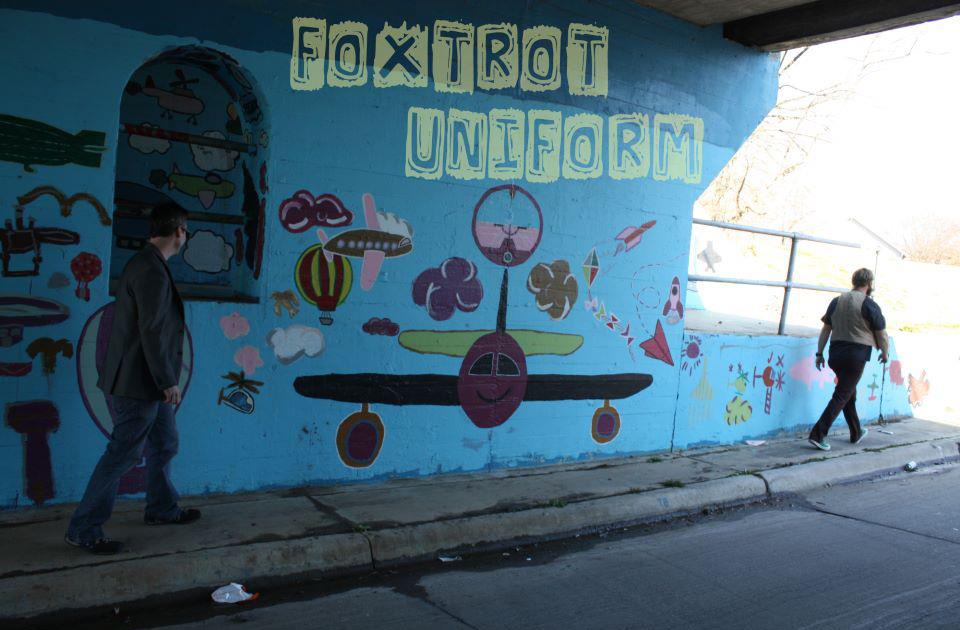 Breaking news! Burning Hotels frontman Chance Morgan had a 12-inch Spicy Italian ® at Subway the other day with no onions! Hanna Barbarians frontman Blake Parish got a flat tire! Kevin Aldridge is a little sleepy! This, my friends, is the kind of hard-hitting journalism you’ve come to expect and savor from your faithful, crotchety, knuckle-dragging Fort Worth-music columnist. But can you blame me? I would think that readers dig knowing every little thing about Fort Worth’s biggest rockstars. Even, y’know, the smaaalll details. But while I was out stalking Chance, Blake, and Kevin, one of the coolest, most original-sounding bands in North Texas recorded and will soon release one of the grooviest, most delicious slabs of good ol’ fashioned rock ’n’ roll ever heard in these here parts. Huj! Huj! Hajrah! marks Foxtrot Uniform’s arrival as a force in not only North Texas but, hell, the universe. “We did not just want to record 12 or so songs and call it a finished album,” said frontman/guitarist/vocalist Kenny Uptain. “We wanted a journey: collective movements that could all be pieced together like our favorite albums,” including Pink Floyd’s Meddle and My Morning Jacket’s It Still Moves. Uptain and the only other member of Foxtrot, drummer/backup-vocalist Kelly Test, began recording their “collective movements” last September, laying down tracks on Test’s computer in his Dallas living room. The duo released five songs in December as an EP, Hey, Mighty Mighty. In addition to playing shows, Foxtrot continued writing and recording, “placing segues throughout with our limited instrumentation and recording experience,” Uptain said. He and Test whittled down about 30 songs to the current 14, “the best possible listening journey we could piece together with the material we had,” Uptain said. Though Test is relatively new to recording technology, he mixed and mastered the final product. “Not only was it great money-wise,” Uptain said, “but I believe [Test] did a stellar job.” Huj! Huj! Hajrah! was finished just a couple of weeks ago. For you local-music fans, imagine if Quaker City Night Hawks and Oil Boom had a baby. For everyone else, Huj! Huj! Hajrah! is an opus of gritty, chunky guitar, snappy drums, and sweet, soulful vocals and lyrics. There’s a little bit of something for everyone, but it’s all pure Foxtrot. “Edge of the World” sways and shimmers, a real trad-blues-influenced neo-doo-wop singalong. On the flip side, “Lil’ Annie” growls and churns like a ’70s stoner-funk dirge, and on the Hendrix-ian “Honey Child,” Uptain’s bone-crushing guitar has a distant, echoing quality (trés ’60s) and Test’s drums skid, stop, and triple-roll all over the place to achieve a pretty damn good approximation of Mitch Mitchell. Full of non-gratuitous bells and whistles, Huj! Huj! Hajrah! sounds like the handiwork of more than just two dudes. Foxtrot, Uptain said, is actually considering expanding into a trio or quintet to “not only recreate the songs we write live but also enhance our possibilities both creatively and artistically in future endeavors.” But the band’s main focus is to build a Texas following and “get the CD out to all who will listen,” Uptain said. A tour is in the works. Foxtrot Uniform will celebrate the album’s release this Thursday at The Basement Bar in the Stockyards (105 W. Exchange Ave., 817-624-0050) with indie-blues headliners Oil Boom and space-rocking openers Secret Ghost Champion. The best part? No cover.