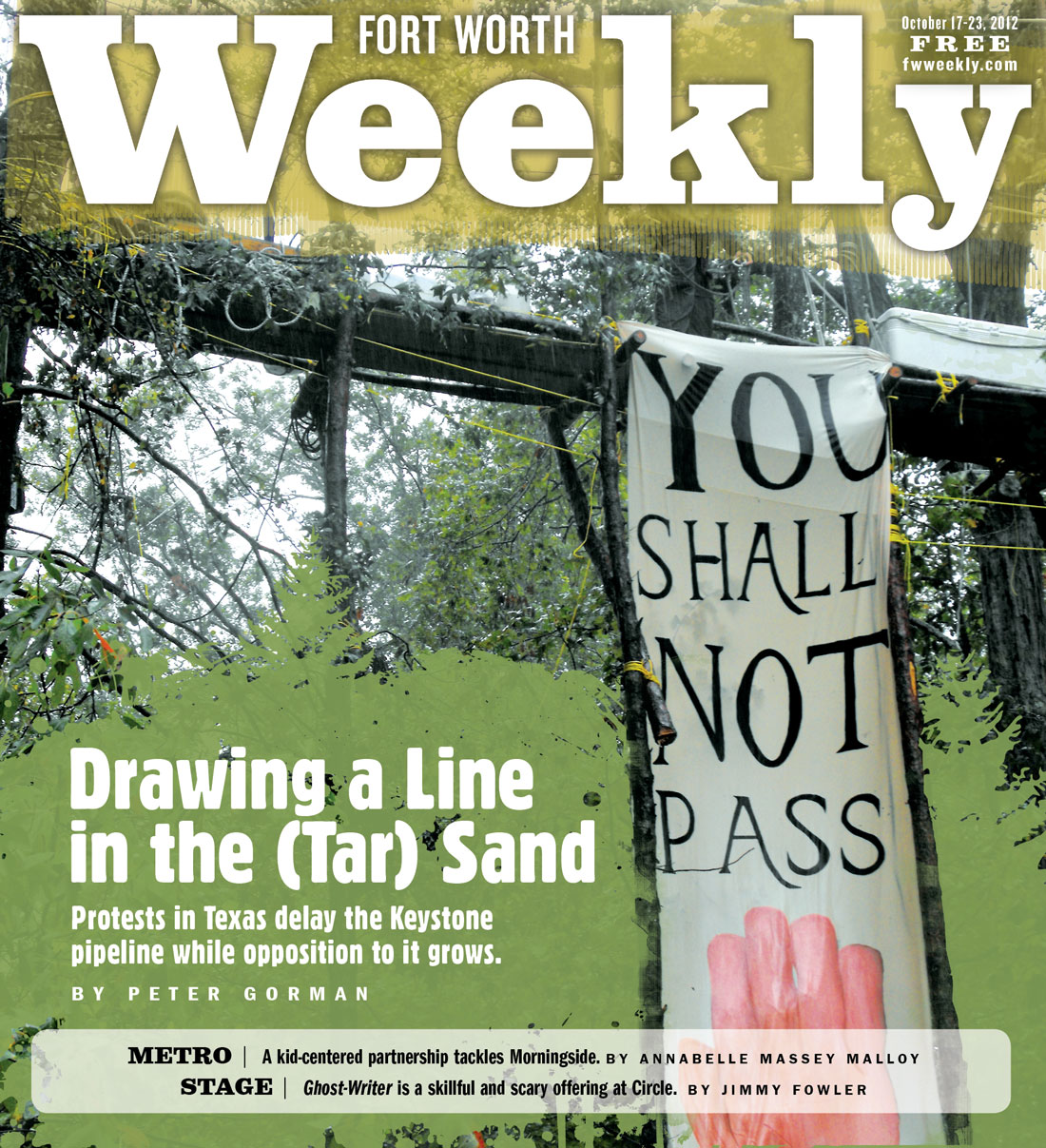 It was a dreary late- September morning in the East Texas woods outside of Winnsboro, chill and drizzly. Everything was wet or damp except for the spirits of four young people sitting in a tree stand. They were perched 30 feet above the path of the Keystone XL pipeline, slated to carry very heavy and very toxic Canadian tar sands bitumen from Cushing, Okla., to refineries in Houston.

The four had already spent several days on the 100-foot-long catwalk with a tarp-covered platform at one end, called The Wall. All said they were prepared to stay on as long as it took to stop the machinery from cutting a swath through some of the oldest forest in Texas. Several hundred yards to the south, a “Tree Village” 80 feet off the ground is home to several more protesters.

“We are committed to staying here as long as we have to in order to stop the pipeline,” one of the sitters shouted down to the reporter on the ground. “The Keystone pipeline must be stopped.” The protesters declined to give their names, in part because they’d rather not get sued and in part because they said they fear retaliation against their families.

The nine or 10 tree-sitters are all under 40 and in good shape, but their endurance is being tested. If staying in cold, wet, cramped quarters on a small platform for days or weeks on end isn’t difficult enough, TransCanada upped the ante in early October by putting three sets of floodlights on the sitters, 24 hours a day, and running loud generators that make sleep almost impossible. The company has also hired local off-duty police to patrol the woods around the trees to prevent food and water from being brought in and preventing the sitters from coming down from their perch at night to stretch their legs.

The story of their protest involves promises by a huge corporation that its project will lower gasoline prices in this country, provide good-paying long-term jobs to more than 100,000 people, and not harm the environment. Each one of those claims by TransCanada is being questioned, not just by the protesters but in most cases by government agencies and economic experts as well. A small but growing grassroots group calling itself the Tar Sands Blockade organized the protests to highlight the environmental danger posed by the pipelines to wide areas of the Midwest and Southwest, and they’re putting their bodies on the line to make their point.

In a bizarre response that sounded like that of a backwoods sheriff complaining about dirty hippies in the 1960s, Texas Land Commissioner Jerry Patterson sent out an opinion piece a few days ago, calling the protesters “self-appointed ‘eco-anarchists’ ” for whom it is time “to come down out of the trees, take a bath, and hit the road.”

But the blockade group includes Texas ranchers, property owners, business owners, and environmentalists — some of whom have endured pepper spray, dangerous Taser jolts,  and chokeholds administered by local law enforcement officers in attempts to remove them from the path of the pipeline construction. They’ve already attracted support from across the country and across the political spectrum — including the Tarrant County Green Party, which has been passing along news and photos from the protests for weeks.

This week, despite the threat of arrest and being included in a lawsuit filed by TransCanada, more than 50 protesters entered the area where the tree-sitters are to show their solidarity with them. Eight were arrested; all face misdemeanor criminal trespassing charges.

What’s uniting them, according to their spokespersons, is a feeling that time is running out to prevent massive potential environmental damage. The tar sands, they say, should never enter the United States — and won’t help U.S. citizens if they do.

The oil extracted from those sands won’t be used to lower gasoline prices in this country because, the blockaders charge, it’s all going to be shipped overseas. The pipeline’s intended southern terminus is Port Arthur, a designated foreign trade zone where the oil products can be loaded onto oceangoing tankers. The protesters believe that the tens of thousands of promised permanent jobs will end up being a couple of thousand temporary jobs and a few hundred full-time pipeline-monitoring gigs, most filled by Canadians already working for TransCanada.

Most importantly, the protesters say, TransCanada has already shown itself to have a terrible record on pipeline safety, as have other tar sands pipelines already in operation.  The blockaders say it adds up to a Canadian company seeking to transport the most dangerous and difficult-to-clean-up oilfield product across thousands of acres of land, much of it being taken by eminent domain or the threat of eminent domain, with almost no benefit being derived by the U.S.

The tree-sitters can’t physically stop the pipeline –– they know they’ll be starved out eventually. Their hope is that by the time they’re forced to leave, they will have attracted enough attention to spark a widespread public outcry that might lead to more investigations and convince federal officials to permanently deny permission for the pipeline to cross the U.S.-Canada border.

The Keystone project is actually two pipelines being built by TransCanada, the giant Canadian pipeline and power company, that will cross prairies, farmland, and iconic areas of the American midsection, joining in Nebraska and then traversing Oklahoma and East Texas to reach Port Arthur. Both are intended to carry tar sands bitumen — a mix of sand, clay, water, and bitumen, a heavy black oil that has to be diluted with large amounts of chemicals, including the carcinogen benzene, to make it light enough to move through a pipeline.

Both pipelines begin in the little oil town of Hardisty, Alberta, at the center of Canada’s huge tar sands deposits. The first, known as the Keystone, is already in operation, running from Hardisty to Steel City, Neb., then south to Cushing, Okla. Another leg runs east from Steel City to Patokia, Ill., where refineries produce primarily diesel fuel and other petroleum products.

The second arm, known as the Keystone XL, is supposed to enter the U.S. at Morgan, Mont., cross South Dakota, and join the initial pipeline at Steel City.

The Obama administration’s stand on the pipeline project has thus far been somewhat schizophrenic. In January 2012 the president denied permission for the XL pipeline to enter this country on its original route, citing insufficient environmental studies on its potential effects on the massive Ogallala aquifer. But in March, President Obama directed federal officials to cut through red tape to get the southern leg of the Keystone XL — from Oklahoma to the Gulf Coast — under way. TransCanada officials have said that, rather than performing those additional studies, they will re-route that northern portion of the XL.

When the Keystone project was initially proposed in 2005, few people outside the oil industry and environmental groups knew what tar sands were. That had changed by the time the Keystone XL came along in 2008. The second pipeline became the center of an environmental firestorm because of its projected path across 1,700 bodies of surface and groundwater, including the Ogallala aquifer, which supplies water to portions of eight Midwest states and provides nearly 30 percent of all water used for agriculture irrigation in this country. Farmers in Nebraska and South Dakota stood with their Republican governors and environmental activists to fight the pipeline on the grounds that contamination of the aquifer by the tar sands was simply too great a risk.

Proponents of the line downplay the danger of ruptures and leaks. TransCanada touts the Keystone pipeline as a state-of-the-art project that will be “constructed to the highest industry standards.”

However, that reassurance was quickly undermined in the first Keystone line’s initial year of operation. The pipeline had 35 spills in the U.S. and Canada, a figure that Cornell University’s Global Labor Institute put at “100 times higher than TransCanada forecast.” The number of spills caused federal pipeline safety regulators in June 2011 to label the pipeline a “hazard to public safety,” and they issued a corrective action order to TransCanada.

The Global Labor Institute report suggested the high number of spills was a result of “the diluted bitumen’s toxic, corrosive, and heavy composition.” The material is considerably more abrasive — and therefore more corrosive — than conventional crude oil. Overall, according to the report, “between 2007 and 2010, pipelines transporting tar sands oil in the northern Midwest have spilled three times more oil per mile than the U.S. national average for conventional crude.”

The worst of those spills occurred on July 25, 2010, when a tar sands pipeline operated by TransCanada’s rival, Enbridge Corp, ruptured near the town of Marshall, Mich. In the 12 hours before the line was shut down, nearly a million gallons of diluted bitumen gushed from the 6.5-foot tear in the pipe, washing into the Talmadge Creek and from there into the Kalamazoo River and a downstream lake. The bitumen separated from the benzene and other chemicals and sank into the riverbed, making cleanup very difficult. More than two years later the cleanup is still not finished, and a 40-mile stretch of the river remains closed to public use. Enbridge has had to buy at least 130 homes along the contaminated waterway since the spill. Photographs after the spill show oil-coated birds and other animals reminiscent of the Exxon Valdez disaster.

Keystone opponents point to that spill as a forecast of what might happen to the Ogallala aquifer, should the second pipeline be built. If the Ogallala is contaminated by a tar sands spill, they say, the effect on midwestern agriculture and tourism, two of the region’s key economic engines, could be disastrous.

On Aug. 18, 2011, the National Congress of American Indians condemned the project because it would run through sovereign Native American land, disturbing possible burial grounds and sacred sites. Two days later, 65 people were arrested outside the White House grounds during a protest demanding that Obama shut down the entire Keystone XL pipeline by denying TransCanada’s request to allow it to cross the international border. Over the next two weeks, more than 1,250 protesters were arrested. The action culminated in a Nov. 6 protest that drew more than 10,000 people.

Anthony Swift, an attorney with the Natural Resources Defense Council, called the pipeline an “unprecedented expansion of the tar sands development, putting our climate, land, and water at risk.

“The reality is that the Keystone XL is a pipeline through the U.S., not to it. We will simply be allowing the transport of the dirtiest source of oil on the planet for a foreign company, a product with environmental risks that don’t exist with conventional crude.”