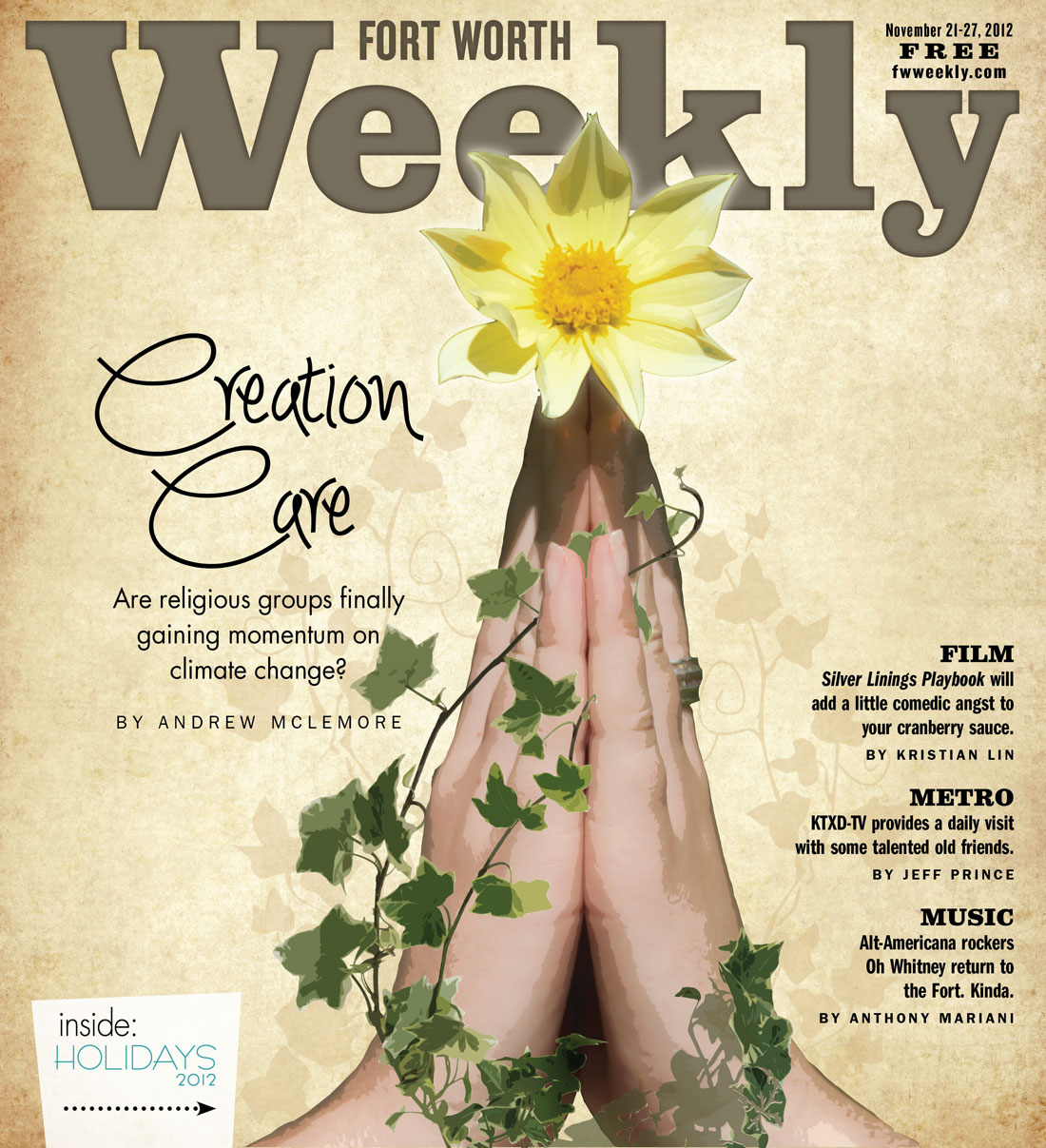 There was a moment, Melissa Ashmore is sure of it, when the officials from the Environmental Protection Agency started paying attention. It was the moment she began talking about Jesus.

The Environmental Protection Agency had come to Arlington city council chambers for a single day this summer to hear what the locals thought about rolling back clean-air standards for the cement industry, which belches out asthma-inducing pollutants carried by prevailing winds across North Texas.

Hours of testimony from other environmentalists preceded her, and Ashmore agreed with them. There was a lot of table-pounding and shouting from the 80 or so activists who showed up, but the EPA panel and state regulators didn’t even look at most of them.

When Ashmore, a member of Fort Worth’s First Congregational Church, took her turn behind the microphone at a small table, she used the kind of language that –– at least in a secular setting like this one –– turns more heads than four-letter words would.

“I was trying to articulate the way that I saw the call to care for the environment and for other people,” Ashmore said. “For me, leading a good Christian life is not just about giving money to charity and feeding the poor but also protecting others from harm in the same way that I would protect my own family. It was about how the Creator called us to protect others.”

She told the panel she appreciated that they’d flown down to listen to the concerns of the community. She told them they were trying to do the right thing.

“After that, they started actually asking questions of the presenters,” Ashmore said.

She was one of a handful of speakers from the newly formed Fort Worth Interfaith Power and Light, the local branch of a national organization dedicated to mobilizing people of faith on environmental issues.

None of them looks like the stereotypical longhaired tree-hugger (though Ashmore insists some of them fit that description nicely), but their convictions about climate change and industrial pollution are no less potent. They simply voice those concerns through the filter of Christian devotion.

It’s a form of environmental activism that “embraces the adversary,” said the Rev. Paul John Roach, senior minister of Unity Church of Fort Worth and another founding member of Fort Worth Interfaith Power and Light.

“You’ve got to work within the system,” Roach said.

Religious environmentalism has been around for decades. Across the country, many churches long ago adopted mission statements and declarations about “caring for God’s creation.” Some congregations stepped up recycling efforts or pitched in for energy-efficient light bulbs.

But it’s only recently that small groups of committed environmentalists have begun to seriously pursue grassroots activism outside the chapel. It’s happening more slowly in Texas than elsewhere (big surprise), but this is a state that places a premium  on moral,  faith-based argu-ments, and Christian environmentalists speak the language. In a politically charged battle over the protection of natural resources, congregations from churches, mosques and synagogues are slowly joining the fray.

“In Texas, the facts alone have not been able to move people off the status quo. It takes a certain amount of organizing around the religious connotations of something to move politicians who otherwise would not be moved,” said Jim Schermbeck, director of Downwinders at Risk, a long-time North Texas environmental advocacy group. “These are people who know how to organize. They are literally a godsend to any group lucky enough to have them.”

In his green cargo pants, with metal-rimmed glasses perched on a sharp nose and the sleeves of his double-pocketed beige shirt rolled up past his elbows, Jon Fripp looks more like a British safari guide than a Virginian engineer and bleeding heart.

As guest speaker at the third meeting of Fort Worth Interfaith Power and Light, he explained the details of his ultra-simple drip irrigation kit, designed specifically for use in third-world countries with little rain or access to water. Two-thirds of the world’s population is underfed or starving, he tells the room, and a little irrigation can go a long way.

“The whole idea of climate change is making use of our resources. We have a certain number of people on the planet, and they all want to get fed,” Fripp said after his presentation. “The whole essence of these faith-based movements is people. It’s not just about the bugs and bunnies. It’s about people. That’s why they asked me to come speak.”

It’s also the third meeting of the budding environmental group, and a dozen people, laypeople and pastors from Fort Worth churches, stayed for the hour-and-a-half-long presentation.

At the group’s first big meeting in October, titled “Water Matters: An Interfaith Discussion about the Environment in North Texas,” organizers recruited three religious experts with backgrounds in Christianity, Judaism, and Hinduism.

About 60 people showed up to hear the speakers, but that was the unofficial grand opening. This month’s meeting didn’t do as well, and the founders were quick to point out that activism of any kind isn’t the first priority of those who attend church.

They know recruitment is going to be an uphill battle.

“People come to church to be spiritually fed,” said Roach. “They’re not there primarily to change the world, they’re there to change themselves.”

Texas Interfaith Power and Light has recently formed new multi-faith coalitions in Dallas and San Antonio as well as Fort Worth. Speakers at monthly gatherings, which attract an assortment of pastors and laypeople from a handful of churches, have discussed climate change, water scarcity, and global hunger. The oldest group, in Austin of course, has already spent two years lobbying the city council and the Texas Legislature for measures to clean up air and water and protesting the Keystone XL pipeline.

The group’s efforts are a reflection of a national movement, if still a nascent one. Two of every three Americans now say they care about the environment because it is “God’s creation,” according to a 2008 Sierra Club survey, and in the last few years there have been enough books tying together spirituality and environmentalism to fill a missionary’s backpack. In February, the newly formed Young Evangelicals for Climate Action protested the second presidential debate because both candidates were allowed to avoid questions about climate change.

Make no mistake: The actual activists remain a minority within the religious community. Their influence is still nowhere near that of the “family values” groups whose opposition to abortion and same-sex marriage has long galvanized the religious right. And when Gov. Rick Perry says he’d abolish the EPA altogether, it’s clear that environmentalists have their work cut out for them.

But change starts small, and it’s helped along when you can get prayers –– and political support –– behind it.

“You don’t need a majority of Texas Christians to agree with you,” Schermbeck said. “Nothing may happen for a while in Texas, but that will change. And when it does, these people are in a profound position to be an instrument of that change.”

Much of the credit for the expansion of Interfaith Power and Light into Dallas-Fort Worth goes to Amanda Robinson, the organization’s Texas coordinator. Religious people care about many issues, and often the environment ranks low on their list of priorities if it shows up at all, she said.

“It’s true that we don’t have widespread religious engagement on environmental issues, but I think that the tide is turning,” Robinson said. “People across the board are accepting that climate change is happening. That is also true in the faith community.”