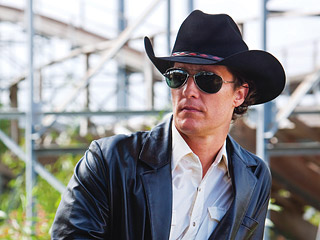 During the DFW Film Critics Association balloting, I voted for Matthew McConaughey’s performance in Killer Joe as one of the best supporting performances of the year, but my fellow film critics didn’t share my enthusiasm. Or, more likely, they were split on which McConaughey performance to vote for from this year. The 43-year-old native of Uvalde, Texas had one hell of a 2012. His richly funny performance as a philosopher-king among strippers in Magic Mike probably sapped support for Killer Joe. Put those two performances together with his uglied-up East Texas district attorney in Bernie and his closeted gay investigative reporter in The Paperboy, and you’ve got a body of work that any actor would be proud of. Still, Killer Joe is the only one of those performances that made me go, “Whoa!” Since that movie is out on DVD today, now’s a good time to examine it and the career of this actor.

One of McConaughey’s first movie roles remains one of his iconic ones: David Wooderson in Dazed and Confused. In a cast populated by the likes of Ben Affleck and Parker Posey, McConaughey’s beguiling take on the dissolute Wooderson made him stand out. Only three short years later, he was headlining the John Grisham adaptation A Time to Kill before many people knew who he was. That movie is now better known for Samuel L. Jackson screaming “I hope they burn in hell!” than for anything McConaughey did, but the leading man did a fine job of conveying horror and anguish during his character’s shamelessly pandering final summation. The supporting role he took in John Sayles’ great Lone Star should have given him some indie props to go with his new fame.

Yet the choices he made over the next decade or so would fritter away his credibility. Pretty male actors tend to have trouble being taken seriously, but McConaughey didn’t help his own cause by headlining a series of cookie-cutter romantic comedies (The Wedding Planner, How to Lose a Guy in 10 Days, Failure to Launch), where he coasted on his good looks and easy charm. He was even blander in his Hollywood thrillers (U-571, Reign of Fire, Sahara). He didn’t lose touch with his indie roots, and his choices there (Thirteen Conversations About One Thing, Frailty) hinted at an actor who was willing to go darker than Hollywood would let him. He did some funny work as a sleazy Hollywood agent in Tropic Thunder, but he lucked into that role because Owen Wilson, who was supposed to play the part, attempted suicide. There was no reason to think it would lead anywhere. By the time he starred in Ghosts of Girlfriends Past, I was ready to give up on him, as you can tell from my review of that movie.

However, he got back on stride with last year’s The Lincoln Lawyer, playing an ethically compromised attorney caught up in a murder plot. Neither his performance nor the film were ground-breaking, but they were both creditable pieces of work and found the actor with a role that was right in his wheelhouse. This was just the prologue to the incredible year he has had.

In Killer Joe, he portrays a Dallas cop named Joe Cooper who moonlights as a contract killer. The movie is adapted from a play by Tracy Letts, who has since won a Pulitzer and several Tonys for August: Osage County. (The movie of that is in the works.) Joe’s methodical psychopathy makes him good at what he does, not only killing people but making sure that he will get away with his crimes. And yet his homicidal side is coupled to a perversity that revels in sexually humiliating other people, men as well as women. Joe is a palpable presence who overwhelms the other characters in the movie, specifically the dimwitted Texas family who hire him to bump off their mother for the insurance money. When the plot goes wrong, he takes things out on everyone, but especially dad’s girlfriend (Gina Gershon) in the scene that I’ve embedded below. WARNING: This scene is violent, graphic, and disturbing in just about every way. Even more powerful is the slow, patient buildup to this scene, when he catches the family in a lie and plays cat and mouse with them. You won’t notice this at first, but this is a rather wordy scene. While we may not associate McConaughey with being an intensely verbal actor, he picks his way through the thickets of Letts’ dialogue like an expert. See this, and wonder how we’ve all underestimated this actor. See this, and be very afraid. See this, and root for McConaughey come Oscar time. (I like his turn in Magic Mike a lot, but it pales next to this.) See this, and wonder how he’ll follow this up. Better yet, just get a hold of the movie and strap yourself in.